When I met Lee Moyer, I was fairly new to the convention circuit and he was delightful and helped me meet people. He also showed me his portfolio which was staggering and made me drool just a little. At some point, he showed me his Literary Pinup calendar, which didn’t have a home at that time. I adored it. His new project is an updated calendar that subverts the old meme of pinups to make literature being smart look undeniably sexy.

It’s also a fundraiser for Worldbuilder’s.

In 2010, I was a Guest of Honor at Baycon with author Peter S. Beagle. By the end of that Memorial Day weekend, I had showed him my collection of recently completed literary pin-ups. I had been working on them for several years as a side project, but had been repeatedly informed that calendars were a dead market. Deader than the authors I was representing. I sent Peter home with one of those pin-ups and by the time you read this, I hope I will have presented him with another pin-up, one that is truly his. 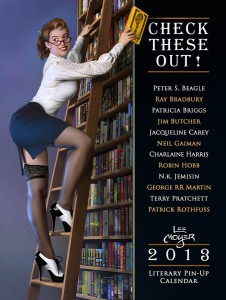 But it was a meal with author and charity founder Patrick Rothfuss (and his beautiful assistants) that proved to be the breakthrough. Last year, his brilliant charity Worldbuilders published my first Literary Pin-up Calendar: CHECK THESE OUT! The calendar made it’s debut at the 2011 World Fantasy Convention where it was espied by Neil Gaiman’s glamourous and alert assistant, Cat Mihos. (Take note: assistants are powerful and magical creatures.) The calendar made it’s way into the hands of Neil Gaiman, who was our first volunteer to be pinned up, and from him back to Peter S. Beagle, then on to Ray Bradbury, Patricia Briggs, Jim Butcher, Jacqueline Carey, Charlaine Harris, Robin Hobb, N.K. Jemisin, George R. R. Martin, and Sir Terry Pratchett.
I’ve been holding off on writing about my favorite bit because it is simply so hard to pick. Was it doing a pin-up for my hero, Ray Bradbury? Painting a character for Robin Hobb that there isn’t even fan-art of? Doing a proper garage calendar for Mercy Thompson? But for all that, and for all my dealings with splendid authors and their amazing assistants, my favorite thing surprises me a little. It’s the month of November. Not the pin-up of the beautiful Clare Grant caught infiltrating the Unseen University, but the page of dates below it. Dates. What’s wrong with me?
The line-up was so spectacular that alphabetical order was the only solution to pairing authors with months. This led to many happy coincidences in the designs of the date pages: Nora Jemisin got her pin-up of Oree on the month of her birth, Neil Gaiman ended up with a month that accommodates a 6 panel comic strip, and Sookie Stackhouse has that perfect quote for July – all to the good. But above all there is the accident of Sir Terry Pratchett ending up with the month of November…. well, Ember. 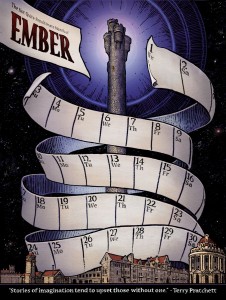 As every impatient child of the Discworld, waiting endlessly for the Hogfather knows, Ember comes before December and Ick. This not-quite penultimate month is like the other months on Discworld in that it features weeks of eight days in duration, Sunday through Octday.
On Pratchett’s spectacular and wildly-entertaining Discworld, science and magic are the same thing. Or maybe they’re different things. No, yes. Whatever they case, they’re two great tastes that taste great together. To solve the problem of Ember, I knew I needed a solution in the style of Pratchett, the wily old Arch-Chancellor himself. Having tried and discarded several unworkable approaches and having consultated with brighter practitioners, I hit upon the notion of detailing the month on the sides of a double-helix, allowing me to show the full week while hiding Octday as the spiral turns. And if a helix, why not show it draped around the Tower of Art itself? And drape it across the rooftops of the Unseen University? I tried it and it worked!
Mostly.
But what then for the dates? Since the days didn’t line up, I couldn’t expect a reader to guess whether the 21st was a Wednesday or Thursday. I’d have to fill each date with a designation of its day. Tricky. But what if I only used 2 letters for the day? Like a periodic table….
It took some 14 major revisions before it truly worked, but it all seems so simple and obvious in retrospect. And for all I hope it doesn’t drive anyone else to distraction, I was delighted by the challenge and the solution.
RELEVANT LINKS:
2013 Calendar: The Tinker’s Packs
Worldbuilders: www.worldbuilders.org
Heifer International: www.heifer.org
BIO:
Lee Moyer is a Chesley Award-winning Illustrator, Designer, and Art Director from Portland, Oregon whose curious penchant for bizarre Kickstarter projects has, of late, been much remarked upon (and indeed quoted in Forbes and elsewhere). His work has been featured in many annuals and compendia (Spectrum, Sci-Fi Art Now, et al.), magazines (Communication Arts, Design Graphics, et al.), and institutions (Society of Illustrators, and the Natural History Museum of the Smithsonian, where he was a docent for a decade). His work is found on many a book cover (Michael Swanwick, Caitlin R. Kiernan, et al.), DVD (Laurel & Hardy, HP Lovecraft -Fear of the Unknown, et al.), Poster (Call of Cthulhu, Stephen Sondheim, et al.), and Game: (13th AGE, The Doom That Came to Atlantic City,et al.). Examples of his work are at www.leemoyer.com. He has recently joined the throng of tweeters @LccMoyer.
Did you know you can support Mary Robinette on Patreon!