After years in exile, Nyxnissa so Dasheem is back in action in service to the bel dames, a sisterhood of elite government assassins tasked with eliminating deserters and traitors. The end of a centuries-long holy war between her country, Nasheen, and neighboring Chenja has flooded the streets of Nasheen with unemployed – and unemployable – soldiers whose frustrations have brought the nation to the brink of civil war.

Not everyone likes this tenuous and unpredictable “peace,” however, and somebody has kidnapped a key politician whose death could trigger a bloody government takeover. With aliens in the sky and revolution on the ground, Nyx assembles a team of mad magicians, torturers,and mutant shape-shifters for an epic journey across a flesh-eating desert in search of a man she’s not actually supposed to kill.
Trouble is, killing is the only thing Nyx is good at. And she already left this man to die… 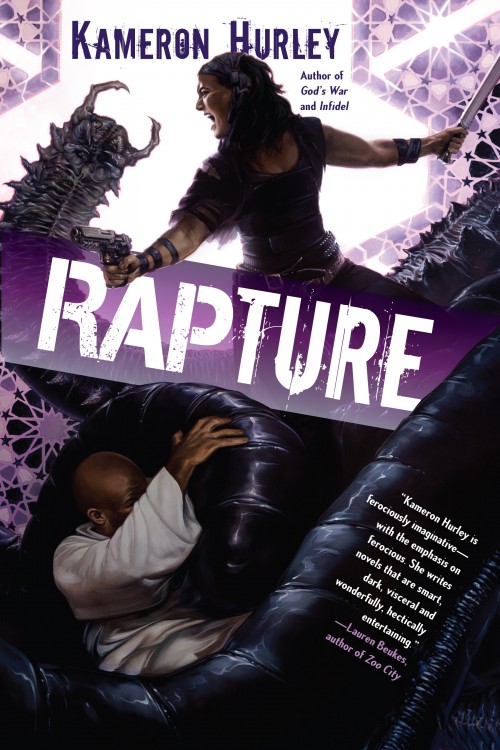 Folks often ask writers where ideas come from, because when we finally set them down in an iconic way, it looks like magic, like it came from nowhere, and we look like super-brilliant people who just tumble over Great Ideas all the time.

But when I took my former government assassin-turned-bounty-hunter, Nyx, out of exile in my new novel, RAPTURE, and gave her the unenviable task of retrieving a politician on the other side of a blood-sucking wasteland, it wasn’t something that just tipped out of my brain over brunch one morning. That flesh-eating desert and I have been friends for a long, long time.

I have loved this bit of bloody desert craziness for years… but had no clue what to do with it.

Twelve years ago, I wrote a short story about a rebel leader who sacrificed her people to a red desert. It made the rounds at all the major magazines, but just never worked for anybody. I couldn’t believe it, because, hey, rebel leaders and bloody deserts! But nobody liked it. So I trunked the story, and held onto the idea of this world-weary woman trekking across a blood-eating desert.

A few years later, I wrote about half a novel about a nomadic warrior named Nalah. She bled all over the desert to satisfy it, and aligned herself with some nefarious foreign men who sought to conquer the churning wasteland. Surely this was such a cool thing that everybody would love it, right?

But nobody wanted that novel, either.

So I took out the desert bit and hung onto it. For later. I was sure I had something here, and was just failing to employ it properly.

The bloody desert sat there on the backburner for a good long while. Right up until the end of my second book, INFIDEL, when I realized I could do some cool stuff with flesh-eating sand. Sand… sand… where would one find flesh-eating sand?

Why, in a flesh-eating desert, of course.

When I sat down and started writing RAPTURE, I realized I finally had the perfect story for that flesh-eating desert. And the perfect heroine to cross it.

Instead of simply setting the desert down as a single set piece, it was actually just one part of a much larger world and much bigger story, one I’d already created for the first two books. It just so happened that this idea was a seamless fit for the sort of story I was telling. Now the “cool” factor of the story didn’t *rely* on the desert. It was part of a greater whole. That was the key. The concept itself wasn’t strong enough to build a compelling story around. It had to be just one part of something greater than itself.

When my characters finally cross over the Wall that separates their country from the contaminated desert, I got to write – finally, after more than a decade – my favorite bit of bloody nastiness: a seething, hungry desert that lives on the blood of the people that inhabit it.

In this world, in this novel, it finally works. And it was bloody fun to write.

Kameron Hurley is an award-winning, Nebula nominated author. Her personal and professional exploits have taken her all around the world. Visit kameronhurley.com for details on upcoming projects, short fiction, and meditations on the writing life.

1 thought on “My Favorite Bit: Kameron Hurley talks about RAPTURE”