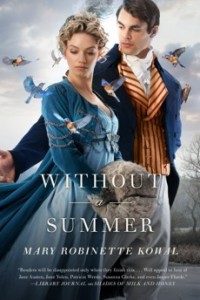 I’m on my way home from the World Fantasy Convention in Toronto. A lot of authors and editors could not make it because they live in New York. Many of those who did make it headed straight for their rooms and had their first hot shower in a week. A lot of them said that they had been unable to see images of the storm damage because they had been without power and so were seeing some things for the first time.

As much as we were talking about fantasy, we were talking about our friends and colleagues who had been hit by the storm. Some of them had to evacuate and had no idea when they’d be able to go home. One editor joked — barely — that his slush pile was actual slush now since his office flooded.

My agent ran a fundraiser for Hurricane Sandy relief and inspired by her lead, I’m auctioning off a manuscript of Without a Summer. This is book 3 in my series and isn’t out until April 2, 2012. I’ll mail the winner a signed manuscript of the book five months before it’s in the stores.

If it goes over $1000, I’ll tuckerize the winner into the series. Note: depending on your name, you may or may not be a character but your name will be there. The books are set between 1814-1818 so I do have to be cautious about committing to character names.

Over $1500, and I’ll include a manuscript of a book that we haven’t even announced yet. All I can tell you is that it is also historical fantasy.

All the proceeds will go to American Red Cross in Greater New York.

You can bid on the manuscript in my ebay auction.