Here we have a debut novel by Mike Underwood for your consideration. For Geekomancy he’s basically turned geek culture into a magic system. Let’s see what his favorite bit is, shall we?

I have a lot of favorite bits in Geekomancy – weaving geek language into conversation, Geekomancy as a literalization of the power of fandom, and more. But the favorite bit I don’t talk about as much is the fact that I got to introduce the world to Drake Winters.

Or, as I always say his name in my head, DRAKE WINTERS! Drake is an encapsulation and willing over-extension of my idea of a pulpy steampunk adventurer. He is a walking, talking, extra-large serving of earnest enthusiasm, and writing him is an utter delight. 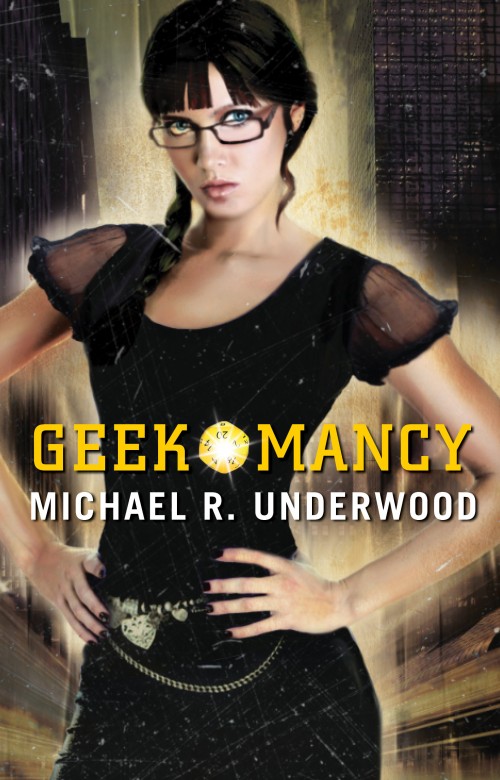 Geekomancy is a contemporary urban fantasy, with a magic system derived from the relationship between the magicians (called Geekomancers) and their favorite cultural properties. My main character can watch The Matrix and channel Wire Fu, and her mentor uses nostalgia-fueled props as the weapons they were in film (lightsaber, blaster, etc.)

But Drake is a throwback, a man out of time, an intruder from a different genre. Drake Winters was originally created for a tabletop RPG that I ran in a homebrew setting. Even then, Drake was a man out of time, an inventor hero from the land of Avalon – a steam-tastic analogue of England. After stumbling into Faerie, he falls in with the charismatic figure known as The Contessa of the Lapis Galleon, who he calls his Mistress.

Because ultimately, Drake Winters is a Doctor Who shout-out wrapped in a Changeling: The Lost character concept. Changeling: The Lost (by White Wolf Publishing) is a tabletop RPG where all of the characters have survived a period of captivity in the mind-and-body-warping land of Faerie. When the game came up, the premise for Changeling and the format for Doctor Who collided in my mind with this question: what if you had a female Time Lord who dimension-hopped instead of time-hopped, and picked up impressionable men, adventured with them, seduced them with the power of her personality, then dumped them unceremoniously far from home? Drake was my answer to that question.

So when I decided to bring Drake Winters into Geekomancy, the character was already firmly established in my brain. He was brash, intelligent, stuffy, verbose, and compassionate. He’s a fantasy rather than Science Fiction version of steampunk, with magic and technology combined with devices like Aerothopters and Aetheric Breakthrough Actuators.

Drake isn’t a geek in the contemporary sense, but his entire character concept is rooted in intertextuality and genre-mashing. He’s my chance to play with some of the fun bits of the steampunk subgenre on my own terms. And since he is almost entirely pop-culture illiterate, he served as a good counter-point to Ree, Geekomancy’s main character, who grew up on texts like Buffy the Vampire Slayer and is a native speaker of Geek-Speak.

Writing Drake is easy, from his voice to his too-formal manner. I just tap into the part of my brain labeled ADVENTURE! and combine it with an intentionally anachronistic verbosity. Drake was so much fun to write that I had to rein him in and make sure he didn’t take over the novel. Geekomancy is Ree’s story, and Drake is just a guest star. But every time I write him, I grow more confident that Drake will get his own time in the spotlight someday.

But for now, he’s My Favorite Bit in Geekomancy – a delightful joke character who turned out to be a fantastic companion in his own right.

Michael R. Underwood grew up devouring stories in all forms: movies, comics, TV, video games, and novels. He holds a B.A. in Creative Mythology and East Asian Studies from Indiana University and an M.A. in Folklore Studies from the University of Oregon, which have been great preparation for writing speculative fiction. Michael went straight from his M.A. to the Clarion West Writers Workshop and then landed in Bloomington, Indiana, where he remains. When not writing or selling books across the Midwest as an independent book representative, Michael dances Argentine Tango and studies renaissance martial arts. Geekomancy is his first novel, coming July 10th from Pocket Star for all eBook platforms.

2 thoughts on “My Favorite Bit: Mike Underwood talks about Geekomancy”