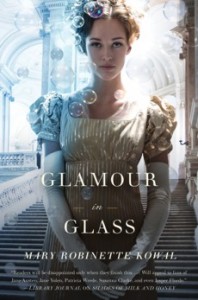 I thought you would. While I was researching Without a Summer

, the next book in the series, I discovered an interesting thing. I’d done the seating arrangements wrong in Glamour in Glass. And not just a little wrong. Completely, totally wrong.

But no one had caught it. I’d given it to several people who knew the Regency, and none of them spotted it. My copy-editor didn’t notice. My editor didn’t. No one noticed the wrongness.

At the point that I noticed, the book was typeset and to fix the problem, I would have needed to restructure the entire chapter. I was worried that doing so would introduce other mistakes. Since I knew I wasn’t going to get to look at the final, I chose to let it stand and promised myself that I would “out” the mistake to you so that no one else who writes Regency books does the same thing.

I gave them assigned seating. That’s Victorian. I had the men escort the ladies in. Also Victorian.

In the Regency, the ladies all lined up together, in order of precedence, and went in to the dining room. The hostess sat at the foot of the table. Everyone else sat wherever they wanted to.

Then the men followed them in, in order of precedence. The host sat at the head of the table and everyone else sat where they wanted.

You can see it in Emma, in fact, when Mr. Churchill walks into the dining room, spies Emma and comes to sit next to her. There are other spots as well which make a lot more sense if I’m not trying to force Victorian seating logic on them.

I could handwave it away by saying that Glamour in Glass is an alternate history or that the Prince Regent was an eccentric and could do things as he liked, but the truth is that it’s an anachronism.

I gave them behavior from the wrong time.

Now I’m curious… Did you spot it before I pointed it out?

16 thoughts on “Glamour in Glass: Anachronism in dining”