It’s no secret that I think John Picacio is an amazing artist. I’m very pleased to have him on to talk about his newest project, which has an associated Kickstarter with it. If his art turns you on, which it will, make sure you swing by the Kickstarter to see the very cool backer rewards he’s offering. As a side note, the music for his Kickstarter video is by John Scalzi. Yeah… that level of cool.

And now… let’s see what his Favorite Bits are.

It’s tough to pick a favorite bit when you’re dealing with a calendar. I have at least twelve favorite bits I could share — an insider’s story for each featured artwork.

How ’bout instead I share three of them with you?

The 2013 John Picacio Calendar is is a ‘greatest hits’ collection of twelve of my favorite book cover artworks that I’ve created (except December, which is a magazine cover work), and it’s the debut offering from Lone Boy. 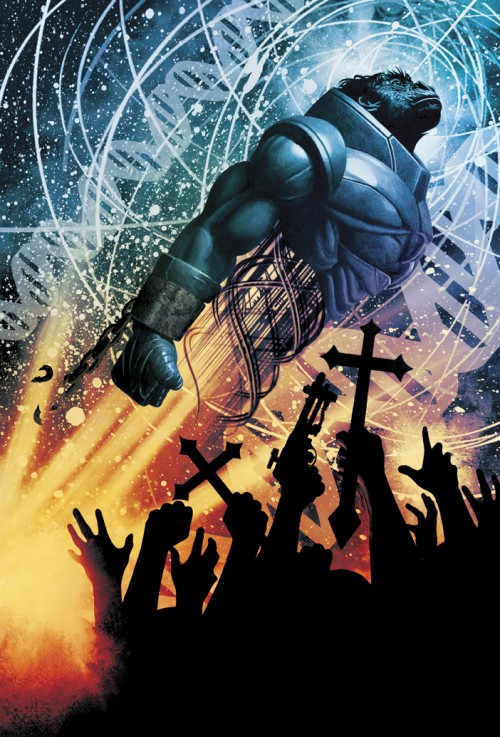 This one was originally created for the anthology of the same name, edited by Hugo Award-winning editor Lou Anders.

Lou had a vision for a book of provocative stories about the near-futures we were creating, intentionally or not. He gave me a quote by Paul McCauley, and it fired me up. “(Science fiction) not only shows us what could happen if things carry on the way they are, but it pushes what’s going on to the extremes of absurdity. That’s not its job: that’s its nature. And what’s happened to science fiction lately, it isn’t natural. It’s pale and lank and kind of out of focus. It needs to straighten up and fly right. It needs to reconnect with the world’s weather, and get medieval on reality’s ass.”

I liked that. I loved the revolution burning in those words.

It was 2008, and I was tired of my country’s government pandering to ignorance, and fostering fear. I was disgusted by rising religious extremism, and attempts to demonize science — and namely, evolution. Conversely, I was amazed at how fast technology was launching us toward a very uncertain future, full of singularity-level breakthrough possibilities — which could be fully realized, if only we could temper our crack addiction to easy convenience at-the-expense-of-all-else.

At the same time, Dave Stevens, the creator of the Rocketeer, had just died at the way-too-young age of 52. Stevens was not a huge influence upon my art career, but his integrity toward his craft was something that made an indelible mark on me as a teenager. His death hit home in a surprisingly profound way.

All of these things merged with my love for FF2’s story lineup, such as Paolo Bacigalupi’s “The Gambler”.

And from all of these disparate parts — a cover identity formed.

People often try to boil cover art down to a purely commercial directive, and that’s the short road to mediocrity. I think the best stuff doesn’t just try to sell, but actually evokes the hopes and aspirations of the story inside. It’s the convergence of those two vectors. I think my best cover artworks happen when I’m in touch with not just the manuscript, but what’s happening in our world, and that gets reflected (however subtly) in the cover art. Those kind of covers seem more resonant, emblematic of a book’s soul, but also connecting an audience to a book in a more genuine way, rather than just an endless hard-sell of the latest visual cliches. I’m not going to sit here and say that I succeeded, but I will say that this cover’s unapologetic pursuit of that ambition is my favorite bit. 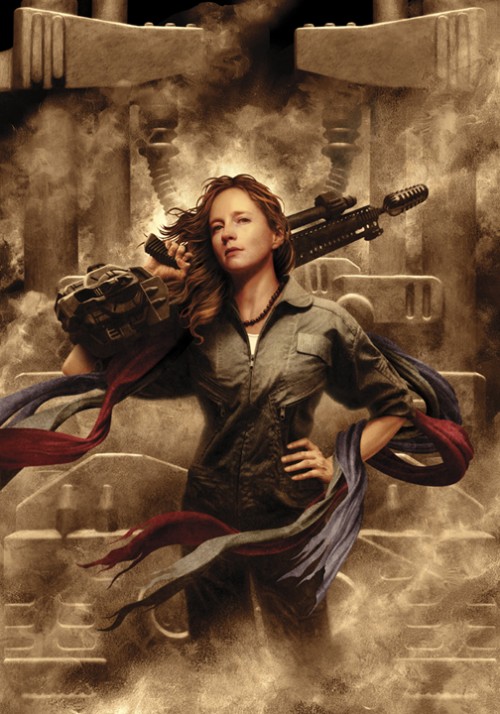 If you recognize this cover art, that’s because it’s the cover of Brenda Cooper’s latest novel — THE CREATIVE FIRE: BOOK ONE OF RUBY’S SONG, available now from Pyr.

It’s a futuristic story that evoked thoughts of METROPOLIS and EVITA, and I thought it was very much a coming-of-age story about a young girl in a revolutionary time. She’s a singer, and while that seemed like an obvious visual riff to play upon, I resisted playing it overtly.

This artwork has another title — “Girl With Microphone: You Say You Want A Revolution”. And that title reveals my favorite bit — this cover is definitely more than meets the eye. It’s my Birth-of-Venus response to politicians that think governments should control a woman’s right to her own body. It’s a poster for my two-year-old daughter that says strength doesn’t necessarily come from firepower. It’s my attempt to find a way to bring Rosie the Riveter into the 21st century, but this time, she’s not necessarily waiting around for her man to come home. 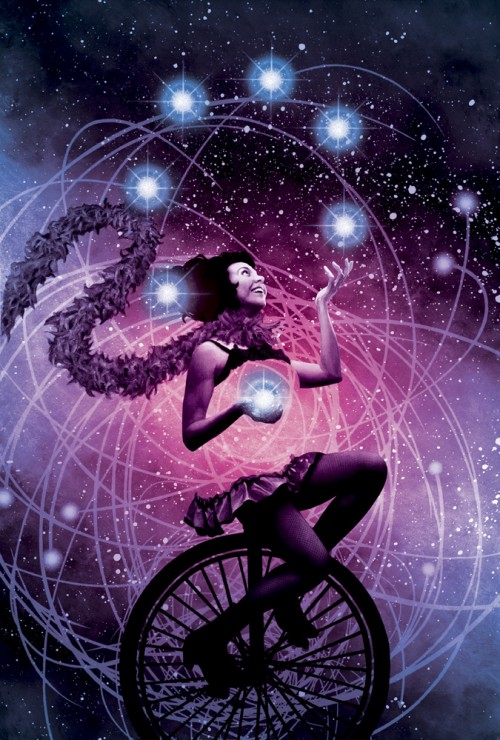 I’m proud of this one because it won the Chesley Award for Best Magazine Illustration in 2010, but that’s not my favorite bit. Originally created as a cover response to Lisa Goldstein’s “Away From Here”, it was the cover art for the September 2009 issue of ASIMOV’S SCIENCE FICTION. The story is about hotels, circus people, and wanderlust.

No spoilers here, but a quirk in the story inspired not only the subject, but also my favorite bit about the solution.

A little art history for you — Coles Phillips was a popular American illustrator of the 1910’s and 20’s. His work was all the rage in advertising. He’s famous for his “Fadeaway Lady” illustrations where he juxtaposed foreground and background elements of the same color, and thus elements of the figure would “fade away”. The results caused readers to look twice and complete the pictures with their imaginations.

It was fun to see how much I could subtract from an image and still have it “read.” And it’s something that I continue to pursue when opportunity invites.

I’ll share some more notes like this in a possible sketchbook that will be produced, if the Kickstarter campaign achieves its next funding goal.

Somebody tell the Mayans to give us back the 2012 that flew by so fast, and let’s see if we can all finish this year stronger than how we began it. Onward and upward in 2013, everyone.

The Kickstarter for the 2013 John Picacio Calendar

JOHN PICACIO is the 2012 Hugo Award winner in the Best Professional Artist category. He’s best known as one of the most prolific American cover artists for science fiction, fantasy, and horror of the last ten years, including the best-selling 2012 calendar for George R. R. Martin’s A SONG OF ICE AND FIRE (Random House/Bantam).

He recently launched Lone Boy, a media company that will house his forthcoming creator-owned art ventures. His accolades include the World Fantasy Award, the Locus Award, five Chesley Awards, and two International Horror Guild Awards, all in the Artist category.

2 thoughts on “My Favorite Bit: John Picacio talks about THE 2013 JOHN PICACIO CALENDAR”