I’m going to let Lev AC Rosen talk about his book All Men of Genius, which is wonderful. But I want to tell you a little story about how he sent this post to me. I ask my guests to get the posts to me a week in advance. Lev wrote this on his iPad in the middle of Hurricane Sandy, after having to evacuate his apartment three days after getting married. That’s right. On his honeymoon, in the middle of the storm of the century, he met his deadline.
I blurbed All Men of Genius in part because his main character is exactly as fearless and determined as Lev is. Today is the paperback release day. I’m not normally this direct, but do me a favour and go buy a copy of All Men of Genius

as a wedding/storm damage present for Lev and his delightful newly-wed husband.
LEV AC ROSEN 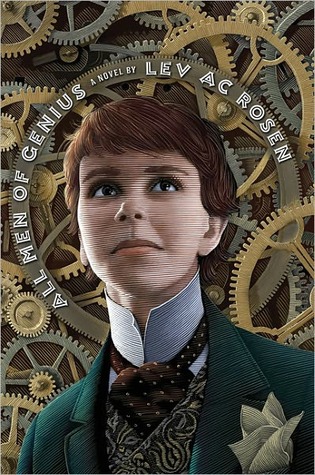 Of course, All Men of  Genius being my first published novel, I have many favorite bits: getting published, many very nice reviews, getting to meet and befriend authors I adore, such as Mary Robinette Kowal, and discovering them to be as  delightful as I’d hoped.  But I’m supposed to talk about my favorite part of the book,  or at least to focus in on one favorite part, so  I’m going to go with a character.  Specifically the character who was cut out the most: Fiona.
I love Fiona. One thing I really wanted to do in All Men was make sure  it  wasn’t just  focused on a rich white lady.  Violet, being a woman in Victorian London,  has  problems, to be sure.  But she’s not the only one.  Ashton is queer, Miriam is middle-eastern and Jewish, and Fiona is poor. Not just not-super-rich, but genuinely struggling, just one step away from sleeping in the streets.  She’s prostituted herself, lost a child and as an actress, she knows her age is killing her career, and will take whatever jobs she can get, no matter how demeaning.
But she’s still clever and funny and ambitious.  And she’s the one Violet turns to when she needs to learn how to act “like a lady.” I love  that social strata reversal; rich girl who has been living as a man asks lower-class actress to teach her how to behave like the rich girl she is; it’s a fun and twisty inversion and it demonstrates how the constructs of gender and class are so performance based.  That was the argument I made to keep Fiona in at all. But I did have to give in to both my agent and editor and cut  one big scene for her (where she sets things on fire and yells at some robots) and cut down another  (where she  spelunks  down a chimney).  The scenes were actively distracting from the  main storyline, but I still miss them; they gave Fiona a chance to be outrageous and  fun in away I really enjoyed. But they may have been a little too over the top.  They may have taken Fiona from outrageous to caricature.
I think I should let you decide.  Both these scenes are  on my website, under deleted scenes. Specifically, scenes 1 and 4.  You need passwords to read  them, and I’m going to give  them to you, cause any friend of Mary’s  has got to be awesome. So the password for scene 1 is  chimney, and for scene 4, matches.
Like I said, I love Fiona, not just because of what she does in the  book, but for how fun she is, how she finds love so surprising, and how she is simultaniously artful and artless. She is surprised when sneaking down stairs with exaggerated motions like she uses to sneak on stage cause noise.  She mourns the baby she didn’t want and who died after only a few days, but she’s strong, too, fearlessly blackmailing the wealthy, seducing younger men, and in these cut scenes, adventuring down dark hallways.  In the grand finale scene of the book, she even takes control of a robot with a… well, I’ll let you read that bit.  It wasn’t cut.
But cutting the scenes I did was probably for the best.  What do you think?  After you’ve read  them, comment here – I’m curious to see your thoughts.
RELEVANT LINKS
All Men of Genius: amazon

| B&N | indiebound
BIO:
Lev AC Rosen is the author of the critically acclaimed All Men of Genius, which was an Amazon Best of the month, on over a dozen best of the year lists, and has been nominated for multiple awards. Publisher’s Weekly says it “puts a steampunk spin on the Victorian comedy of manners while sneakily critiquing the gender biases of both genres.”  The Onion’s A.V. Club declares that it “slyly examines the psychology and the aesthetics behind the act of human invention,” and Locus Magazine says it “mixes genres with fearless panache.”
Did you know you can support Mary Robinette on Patreon!

3 thoughts on “My Favorite Bit: Lev AC Rosen talks about ALL MEN OF GENIUS”