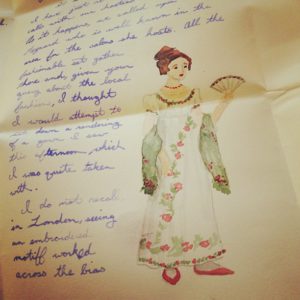 One of the things I enjoyed during the Month of Letters Challenge was sending letters from Jane. One of them has arrived and the recipient posted a photo online. As you can see, I sometimes had a good deal of fun as in this case where Jane included a costume sketch. That is written with an actual quill.

This particular drawing is of a real dress which Jane might indeed have seen at a party in Binché, where she is writing the letter from. I have a calendar that I used to keep track of the plot and how it fit into the historical world events.

For these letters, I was having Jane write “in real time” which means that the day of the month is the same, but she’s in 1815.  That means she’s smack in the middle of events in Glamour in Glass

What I found fascinating about the exercise was the process of thinking about Jane’s life outside the confines of plot. For instance, Jane wrote this letter on February 20th. I have plot events on February 6th and February 28th.

What does she do in between?

I often talk about how important it is to give your characters a life outside the plot. The exercise of writing letters for Jane really drives that home. I might start doing this for other characters.

But perhaps not with a quill pen.