SL Huang is joining us today with her novel Zero Sum Game. Here’s the publisher’s description.

The vector calculus blazing through her head lets her smash through armed men twice her size and dodge every bullet in a gunfight. She can take any job for the right price and shoot anyone who gets in her way.

As far as she knows, she’s the only person around with a superpower . . . but then Cas discovers someone with a power even more dangerous than her own. Someone who can reach directly into people’s minds and twist their brains into Moebius strips. Someone intent on becoming the world’s puppet master.

Someone who’s already warped Cas’s thoughts once before, with her none the wiser.

Cas should run. Going up against a psychic with a god complex isn’t exactly a rational move, and saving the world from a power-hungry telepath isn’t her responsibility. But she isn’t about to let anyone get away with violating her brain — and besides, she’s got a small arsenal and some deadly mathematics on her side. There’s only one problem . . .

She doesn’t know which of her thoughts are her own anymore. 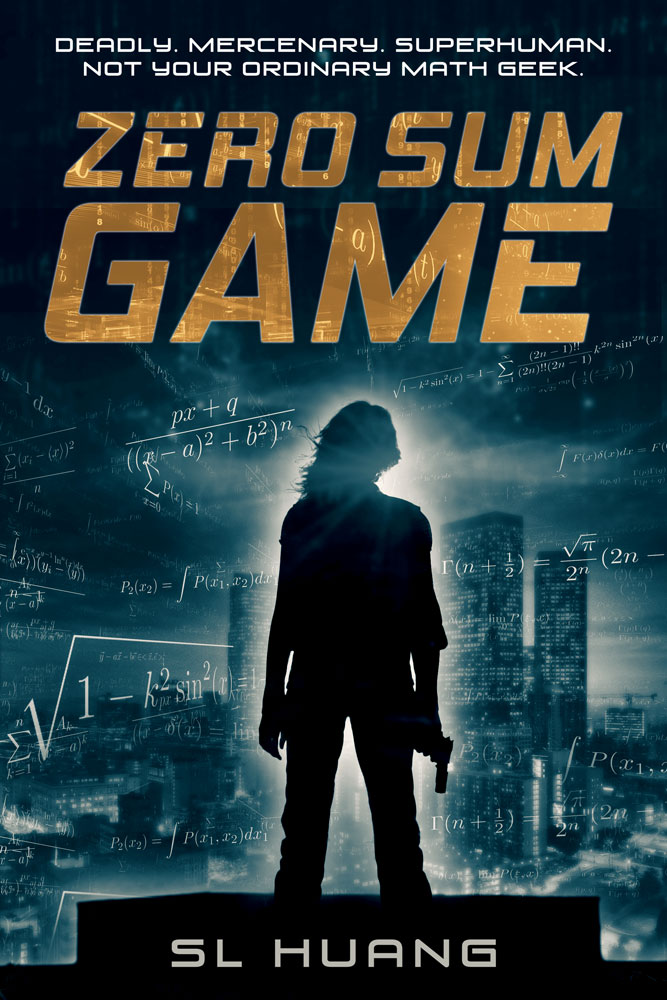 “Don’t look now, but we’re being followed.”
Arthur flicked his eyes to the side mirror. “I don’t see anything. How can you tell?”
“Game theory,” I said. “The white sedan isn’t driving selfishly.”

When choosing something for this piece, I kept coming back to the above bit. Why? Because it never fails to make me giggle.

This clip — not just the content of the dialogue, but my love for it — encapsulates everything about this book. I didn’t write about a character whose superpower is math to be clever (okay, maybe to be a LITTLE clever!), I wrote about a superpowered mathematician because I love math. And I love PLAYING with math. Sometimes I think these books are really all about me going on an extended self-indulgent tear of writing an action movie filled with math jokes.

Because, oh yeah, I’m also reveling in my love of action through the whole book. I’ve been reliably informed ZERO SUM GAME is a thriller — I didn’t try to write a thriller, but I guess when you pack something with gun fights and car chases and explosions, it ends up being one, and I REALLY LIKE gun fights and car chases and explosions. So when people ask the dreaded “what’s your book about?” question, I usually say, quite cheerfully, “Math and guns!”

People who know me usually sigh at that point and say, “Of course that would be the book you would write.” (My friends know me a touch too well.)

There’s a more serious reason I like this bit, however, and that’s what comes right after:

“It’s okay. I can lose them.” I juked the steering wheel to the side and slammed on the gas, shooting through the next intersection just as the light changed. Arthur yelled. In the rearview mirror, an SUV crashed spectacularly into the passenger side of the white sedan, and brakes screeched as three other cars skidded on the wet streets, spinning to a stop and completely blocking the intersection behind us.

“What the hell!” cried Arthur.

“You could’ve gotten us killed!”

“Please. That was child’s play.”

“You might’ve gotten other people killed!”

“At those velocities it would have been their faults for buying death traps.” It was true, though I hadn’t thought it through in so many words beforehand. I decided against telling Arthur that.

In the background of the math-guns-explosions-thriller part of ZERO SUM GAME, there were other ideas I wanted to explore. Questions of morality. The characterization of good guys and bad guys, of what’s heroic and what’s not.

I like the bit above because it’s a snapshot of Cas’s skills — but also of her arrogance and her moral bankruptcy. She’s something of an antihero…if she’s even a hero at all. You can say a lot of things about Cas: she’s intelligent, stubborn, street smart, loyal, occasionally funny — but one thing you can’t call her is nice, and I LOVE that about her. I love jerkass protagonists in general, but I note that I’m particularly proud of her unapologetic rough edges because I chose to make her a woman, and how often do we get antihero asshole protagonists who aren’t male? Not very often.

And Cas’s amorality is something she struggles with, as a background theme to the action. Once she teams up with Arthur, the other person in the above excerpts, she’s working with someone who has a conscience, and his morals force her to question her immediate answer of violence as always being the most expedient solution. Arthur’s the one the reader probably sympathizes with more, in fact, as he tries to reconcile his own moral code with having someone as violent as Cas as an ally.

So if I had to choose one tiny section to represent the entire book, it would be the above lines. We’ve got math and we’ve got action, but we’ve also got a perfect example of Cas’s tendency to jump first and reflect later, to cause a five-car pileup with no questions asked, and to consider other human lives rather less than she should. And we see Arthur, who ALWAYS thinks about these things beforehand — and who’s starting to make Cas do it, too, maybe just a little bit.

(The quotes in this post have been trimmed slightly so as not to be confusing out of context.)

SL Huang majored in mathematics at MIT. The program did not include training to become a superpowered assassin-type.Sadly.