I should note that I’m really excited because this is my first starred review. Happy, happy dances! 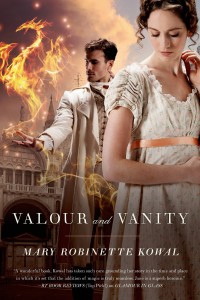 Renowned glamourists Lord and Lady Vincent become the victims of an elaborate scam that leaves them in dire straits until they conceive of a daring strategy to strike back.

After an extended voyage with her family, Jane and Vincent are anxious to find some time to themselves, traveling to Murano. They have a letter of introduction from the prince regent and hope to work with an artisan to experiment on infusing glamour—magical illusions of sight, sound and light—into glass. On the way, they’re waylaid by pirates, then rescued by a fellow passenger who takes them under his wing in the city. Without papers or money and with Vincent suffering a concussion from the attack, they’re grateful for the gentleman’s help. Once they make progress on their revolutionary glamour process, however, they’re detained by the local police and accused of fraud. Realizing their “friend” is a con man who has disappeared with all their notes and finished work, Jane and Vincent are left broke, in debt and under suspicion: “They had no funds and no friends at all. The only resources they had were the clothes upon their backs, and even those they owed money for.” Unable to find employment, Vincent becomes dispirited, especially when he must depend on the meager salary Jane manages to secure from a nearby convent. Things look up when a chance sighting of one of the crooks enables Vincent and Jane to turn the tables on them: “[S]he could see his mind working and putting together pieces of a plan, as surely as if he was plotting a glamural.” Kowal continues her creative Regency-set Glamourist Histories series with a clever, captivating plot that culminates in a magical heist storyline. Before we get there, though, we are treated to a touching examination of a loving marriage under duress and the connections and collaborations these extraordinary partners must create and reaffirm with each other and those around them in order to thrive.

4 thoughts on “KIRKUS gives VALOUR AND VANITY a starred review!”