John Kessel is joining us today with his novel Pride and Prometheus. Here’s the publisher’s description:

Pride and Prejudice meets Frankenstein as Mary Bennet falls for the enigmatic Victor Frankenstein and befriends his monstrous Creature in this clever fusion of two popular classics.

Threatened with destruction unless he fashions a wife for his Creature, Victor Frankenstein travels to England where he meets Mary and Kitty Bennet, the remaining unmarried sisters of the Bennet family from Pride and Prejudice. As Mary and Victor become increasingly attracted to each other, the Creature looks on impatiently, waiting for his bride. But where will Victor find a female body from which to create the monster’s mate?

Meanwhile, the awkward Mary hopes that Victor will save her from approaching spinsterhood while wondering what dark secret he is keeping from her.

Pride and Prometheus fuses the gothic horror of Mary Shelley with the Regency romance of Jane Austen in an exciting novel that combines two age-old stories in a fresh and startling way. 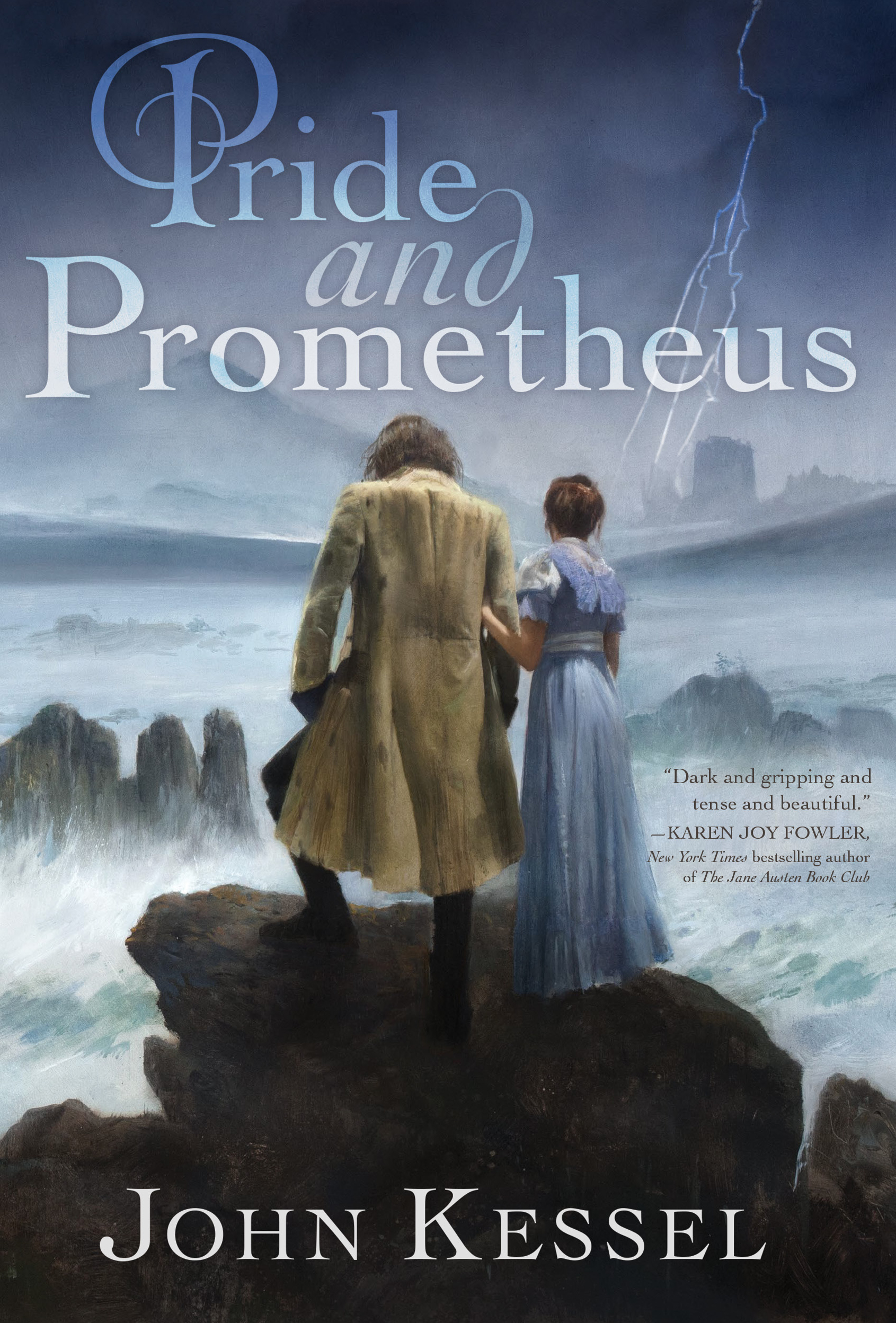 I have a couple of moments in Pride and Prometheus that I like a lot. One of them I think I will leave for you to experience when you read the book, but my other favorite is chapter five. This was one of the last chapters I finished in the twenty-one-chapter novel, mostly because it was a pain in the neck to write.

Pride and Prometheus is an expansion of my novelette from 2008, which won the Nebula Award and the Shirley Jackson Award. That story is told from the point of view of Mary Bennet, the sententious, bookish, unattractive middle sister of the Bennet sisters of Pride and Prejudice, who in my tale meets Victor Frankenstein, and ultimately his Creature. Victor is in England on his way to Scotland to create a bride for the monster, who threatens to kill all those Victor loves unless he makes him a companion.

I did not plan to make a novel out of the story and spent ten years resisting the idea until I realized that there was indeed a novel to be told. I did not want simply to tack on an unrelated sequel or pad out a narrative that already existed. The way I solved this problem was to start earlier and end later. The first four chapters introduce the viewpoint characters—Mary, Victor and the Creature—establish their motivations and set their stories in motion. Chapters six through ten cover the events that originally appeared in the novelette, and then eleven through twenty-one carry on from there.

Chapter five was my transition from the new beginning to the events of the old story.

It started life as a brief grab bag of a chapter in which I needed to move characters from one place to someplace else to prepare for the more dramatic events to come. In any novel, I think, a writer runs into these moments that can’t be avoided but which seem at best like carpentry and at worst drudgery. As such, I had trouble making chapter five work. I rewrote it many times.

Mary and Kitty are at home and chafing under the attentions of their difficult mother Mrs. Bennet. Not a lot happens here besides Kitty getting permission to visit Elizabeth and Darcy at Darcy’s estate Pemberley, and, to everyone’s surprise, Mary asking to go with her. After a lot of thinking and rewriting it ended up being like so many chapters in Austen novels, essentially two conversations: the first between Mary and her sister Kitty and the second between Mary and her father.

The scene between Kitty and Mary used a classic Austen setting: a sunny afternoon when the two sisters walk home from church, talking privately, away from their parents. Mary and Kitty are very different people, thirteen years older than they were in Pride and Prejudice. They have both been struggling with the notion of ending up spinsters; Kitty is not happy at the prospect and is desperate to find a husband. Mary has until recently resigned herself to being alone, but now she has two prospects, one realistic and dull, and the other Victor Frankenstein.

This is the most intimate scene between the sisters, where they talk about their hopes and fears, and despite their differences of temperament, show a real bond. One purpose here was to make Kitty, who earlier might have seemed shallow, sympathetic, another to show the sisters’ love for each other. I managed to get out of this scene alive; I’m sure my sigh of relief must have been audible from Derbyshire.

Then I had to write the scene between Mary and Mr. Bennet. Its purpose was to have Mary (who heretofore has spent most of her time stuck at home entertaining her mother) ask for permission to visit Pemberley with Kitty. Besides this I had no idea what else they might discuss. Once I got them talking, they fell into a conversation about Mary’s prospects, about marriage in general, and about why Mr. and Mrs. Bennet, two people who could not be more incompatible in temperament, ended up together—a question that readers of Pride and Prejudice have been asking for 200 years. It’s a moment of intimacy, an extrapolation that I expect many Austen readers or critics must have made about the Bennets, but that I had not seen written about anywhere. I was genuinely surprised at Mary’s forcefulness in demanding what she wants here, and even more so at how Mr. Bennet reacts, and how he confides in her.

My mental conception of the novel was “A Jane Austen heroine falls into a gothic novel.” For the most part my novel follows Frankenstein in all its melodrama—murder, animated corpses, body snatching. But chapter five is all Austen, and that’s why I like it so much. I can’t claim to match Jane in her wit and subtle delineation of character, her deconstruction of the manners and morals of well bred English families, but here is where I enter the most fully into her world.

Born in Buffalo, New York, John Kessel’s most recent book is the new novel Pride and Prometheus.  He is the author of the earlier novels The Moon and the Other, Good News from Outer Space and Corrupting Dr. Nice and in collaboration with James Patrick Kelly, Freedom Beach. His short story collections are Meeting in Infinity (a New York Times Notable Book), The Pure Product, and The Baum Plan for Financial Independence.
Kessel’s stories have twice received the Nebula Award given by the Science Fiction and Fantasy Writers of America, in addition to the Theodore Sturgeon Memorial Award, the Locus Poll, and the James Tiptree Jr. Award. His play “Faustfeathers’” won the Paul Green Playwright’s Prize, and his story “A Clean Escape” was adapted as an episode of the ABC TV series Masters of Science Fiction. In 2009 his story “Pride and Prometheus” received both the Nebula Award and the Shirley Jackson Award. With Jim Kelly, he has edited five anthologies of stories re-visioning contemporary short sf, most recently Digital Rapture: The Singularity Anthology.
Kessel holds a B.A. in Physics and English and a Ph.D. in American Literature. He helped found and served as the first director of the MFA program in creative writing at North Carolina State University, where he has taught since 1982. He and his wife, the novelist Therese Anne Fowler, live and work in Raleigh, NC.
Did you know you can support Mary Robinette on Patreon!

3 thoughts on “My Favorite Bit: John Kessel talks about PRIDE AND PROMETHEUS”