Dan Koboldt is joining us today with his novel The World Awakening. Here’s the publisher’s description:

Quinn Bradley has learned to use the magic of another world. And that world is in danger. Having decided to betray CASE Global, he can finally reveal his origins to the Enclave and warn them about the company’s imminent invasion. Even if it means alienating Jillaine…and allying with someone he’s always considered his adversary.

But war makes for strange bedfellows, and uniting Alissians against such a powerful enemy will require ancient enmities-as well as more recent antagonisms-to be set aside. The future of their pristine world depends on it. As Quinn searches for a way to turn the tide, his former CASE Global squad-mates face difficult decisions of their own. For some, it’s a matter of what they’re willing to do to get home. For others, it’s deciding whether they want to go home at all.

Continuing the exciting adventures from The Rogue Retrieval and The Island Deception, The World Awakening is the spellbinding conclusion to the Gateways to Alissia fantasy series from Dan Koboldt. 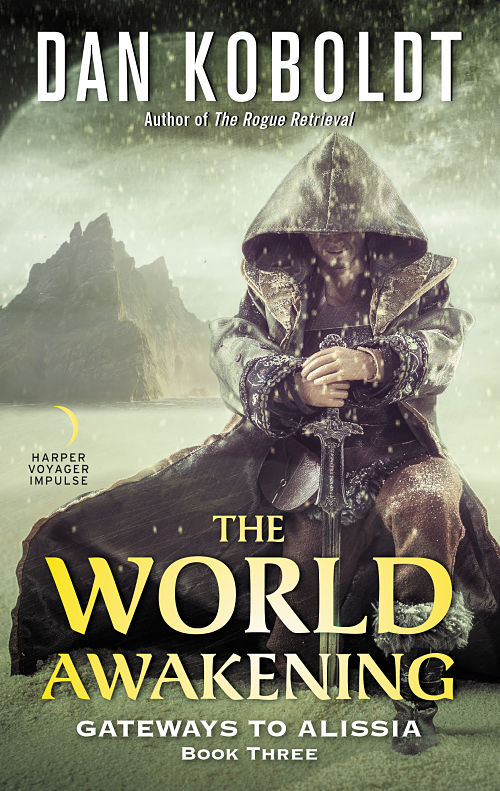 When I started writing this series, I asked a simple question: if you sent a modern illusionist into a medieval world, how well could he pass himself off as a real magician? I imagined that he could probably pull it off, especially if he leveraged modern technologies and materials that a pre-industrial society has never seen.

When I started the story, I figured that arming my character with geeky modern tech – LEDs, lasers, and maybe a small flamethrower – would be the most fun. But I was wrong. My magician’s favorite thing about entering a pristine medieval world isn’t his technological advantage: it’s access to a naïve audience.

This not only helps with his tricks, but puts all of our world’s history and pop culture at his disposal. It came in handy in the first book, when he had to talk his way past a security checkpoint:

Then the lyric just popped into his head. “So now we’ve come to you, with open arms. Nothing to hide.” He held out his arms, palms open, imploring him. “Believe what I say.”

That’s from a Journey song, which the natives in the other world have obviously never heard. Later, in book two, he finds himself turning down a job offer with a little help from Robert Frost:

The captain gave him a serious look. “Somethin’ tells me you’re destined for bigger things. But if they don’t pan out, I’d be happy to take you on.”

“I appreciate that,” Quinn said. “But I have promises to keep, and miles to go before I sleep.”

Knowledge of our pop culture also provides a wealth of ideas for handling sticky situations. Like this one in The World Awakening, when Quinn and Jillaine need to approach a dangerous man about a ransom:

“Never heard of it.”

“Oh, it’s a classic. And you get to be the bounty hunter, which will be more fun.”

She cringed a little. “I’m not sure I can pull that off. What do I even do?”

“And there’s costumes, too,” he said, pretending not to hear. He leaned back and gave her the up-and-down survey. “For you, I’m thinking leathers. Maybe a little chain mail to really sell it.”

“What about you?” she asked.

Her eyebrows shot up, and she put on a pensive expression. “This begins to offer some appeal.”

Of course she’s never heard of the fake bounty hunter routine. She hasn’t seen Return of the Jedi.

When I began this series, I thought that my magician would rely on his hard-won skills and state-of-the-art technology to get by in the other world. But his knowledge of pop culture proved surprisingly valuable as well, and that’s what makes it my favorite bit.

Dan Koboldt is a genetics researcher and fantasy/science fiction author from the Midwest. He is the author of the Gateway to Alissia series (Harper Voyager) about a Las Vegas magician who infiltrates a medieval world. He is currently editing Putting the Science in Fiction, (Writers Digest), a reference for writers slated for release in Fall 2018.

By day, Dan is a genetics researcher at a major children’s hospital. He has co-authored more than 70 publications in Nature, Science, The New England Journal of Medicine, and other scientific journals. He lives with his wife, daughter, and twin boys in Ohio