This week on Writing Excuses, we’re kicking off a new structure, a masterclass in fiction. Here, I’ll let you read the description. 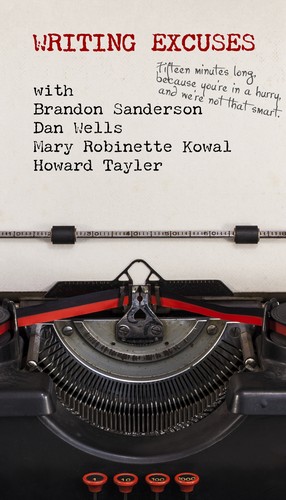 We wanted to do something different this year. Something special. As we brainstormed we kept returning to something a listener said years ago: “Writing Excuses is like a master class in writing genre fiction.”

The answer? It would sound like Season 10 is going to sound. This year we’re going to go to school! Each month will focus on a specific bit of the writing process, and each podcast will drill down on one of those bits. We’ll still have some “wildcard” episodes with guests, but for at least three weeks out of each month we’re going to stay on topic. If you’re new to the podcast, this is where to start! If you’re an old hand, don’t worry — this isn’t a return to the 101-level stuff.

In January we’ll cover the very beginning — coming up with cool ideas, and wrapping them up into something that we can turn into a story. And for this first episode we’ll answer the dreaded “where do you get your ideas” question quite seriously. We’re not going to tell you about the Idea Factory in Schenectady (Harlan Ellison’s stock answer,) nor are we going to eye-roll. Nope. We’re going to tell you how we get our brains to think stuff up, and then we’re going to give you homework in the writing prompt.

You can listen to the episode here: Writing Excuses 10.1: Seriously, Where Do You Get Your Ideas?

Now… As part of this, I’m going to do my level best to play along with the writing exercises each week so that you also have concrete examples to look at, in addition to the podcast.

This week’s writing exercise is:

Writing Prompt: Write down five different story ideas in 150 words or less. Generate these ideas from these five sources:

From an interview or conversation you’ve had: — So I do this podcast…

[This one, I’m showing you a little of the brainstorming I do, too.]
Milliner assassin
Nobleman who wants to hire her
Fashionable city… I use London a lot and don’t want to go there again, but am also sufficiently lazy that I want to avoid heavy research… Okay, so this is going to be a secondary world Venice, but in the Venetian Republic sense, not just in the city.

Milliner assassin is hired by a nobleman to kill a woman who has the power to destroy him. In the process of carrying out the assignment, the assassin realizes that the woman is guilty of nothing more than refusing his advances. Annoyed and angered, she takes steps to deliver the hat to him “for approval.” He dies in his gondola, seemingly alone. The only clue is an artificial orange. The assassin’s secret is that the hats do not kill, they simply mark the target and provide a portal through which the assassin can enter. The woman who was her original target reaches out to her and says that there are other women who may be in need of assistance. The milliner is only too happy to help.

From research you’ve done (reading science news, military history, etc) — The 1st Russian Woman’s Battalion of Death
In an mosttly women, and historically accurate WWI story, we follow [name] as she enlists in the Russian Army under the famous Maria Bochkareva. The lady soldiers are mocked. They go to the front lines, go over the top and take three German trenches with very few loses. The men, however, are too frightened to follow them.  [name] returns, victorious, with her comrades to mock the men who failed to take even a single trench.

From observation (go for a walk!) — It’s snowing! I kept finding dropped gloves and saw a boot. Who loses a boot?
In the bitter cold of Chicago winter, a young woman finds a pair of boots standing upright in the fresh snow, as if they were in mid-stride. A trail of footprints leads to them, but nothing leads away. It looks as though someone simply vanished from their boots. She takes a picture and posts it to Instagram as #MysteryBoots. To her surprise, she is contacted by a man who has seen the same phenomenon no less than three times. They meet over coffee. Discussing various theories, including performance art, eventually leads to tracking other instances of the vanishing walker. She sees footage of herself on a viral video talking about the boots and confronts him. He confesses that he’s actually an artist creating these as installations and has been creating a secret documentary about the people who find them.

From a piece of media (watch a movie): We watched Slings and Arrows tonight
Police detective [name] is in the audience for a production of Hamlet, when the theater loses power. Rather than stopping the show, the cast continues as though it is a radio play. When the lights come back up, the actor playing Hamlet is dead in the middle of the stage. Someone had been delivering his lines in the dark, so no one knows exactly when he died. [name] investigates and eventually finds the culprit.

From a piece of music (with or without lyrics): Unwoman’s The Bridge

While on a steampunk cruise, a solo cellist is caught up in solving a murder when a guest is found dead with the end pin shoved through his heart. She has to solve the murder, and clear her name, before they dock. In a thrilling climax involving the salsa lounge and a live band, she corners the real murderer and gets his confession broadcast through the ship.

So… that’s basically how I do it. Usually, at this point, I’d come up with names for the characters but I figured it would be more useful to you to see a slightly rawer version.

10 thoughts on “Writing Excuses’s 10th season is a masterclass. (Plus Mary’s homework)”