Jim C. Hines is joining us today with his novel Unbound. Here’s the publisher’s description.

For five hundred years, the Porters have concealed the existence of magic from the world.

Now, old enemies have revealed the Porters’ secrets, and an even greater threat lurks in the shadows. The would-be queen Meridiana, banished for a thousand years, has returned in the body of a girl named Jeneta Aboderin. She seeks an artifact created by Pope Sylvester II, a bronze prison that would grant her the power to command an army of the dead. Michigan librarian Isaac Vainio is powerless to stop her, having been stripped of his power and his place among the Porters by Johannes Gutenberg himself. But Isaac is determined to regain his magic and to rescue his former student Jeneta. With no magic of his own, Isaac must delve into the darker side of black-market magic, where he will confront beings better left undisturbed, including the sorcerer Juan Ponce de Leon.

With his loyal fire-spider Smudge, dryad warrior Lena Greenwood, and psychiatrist Nidhi Shah, Isaac races to unravel a mystery more than a thousand years old as competing magical powers battle to shape the future of the world. He will be hunted by enemies and former allies alike, and it will take all his knowledge and resourcefulness to survive as magical war threatens to spread across the globe. Isaac’s choices will determine the fate of his friends, the Porters, the students of Bi Sheng, and the world.

Only one thing is certain: even if he finds a way to restore his magic, he can’t save them all…. 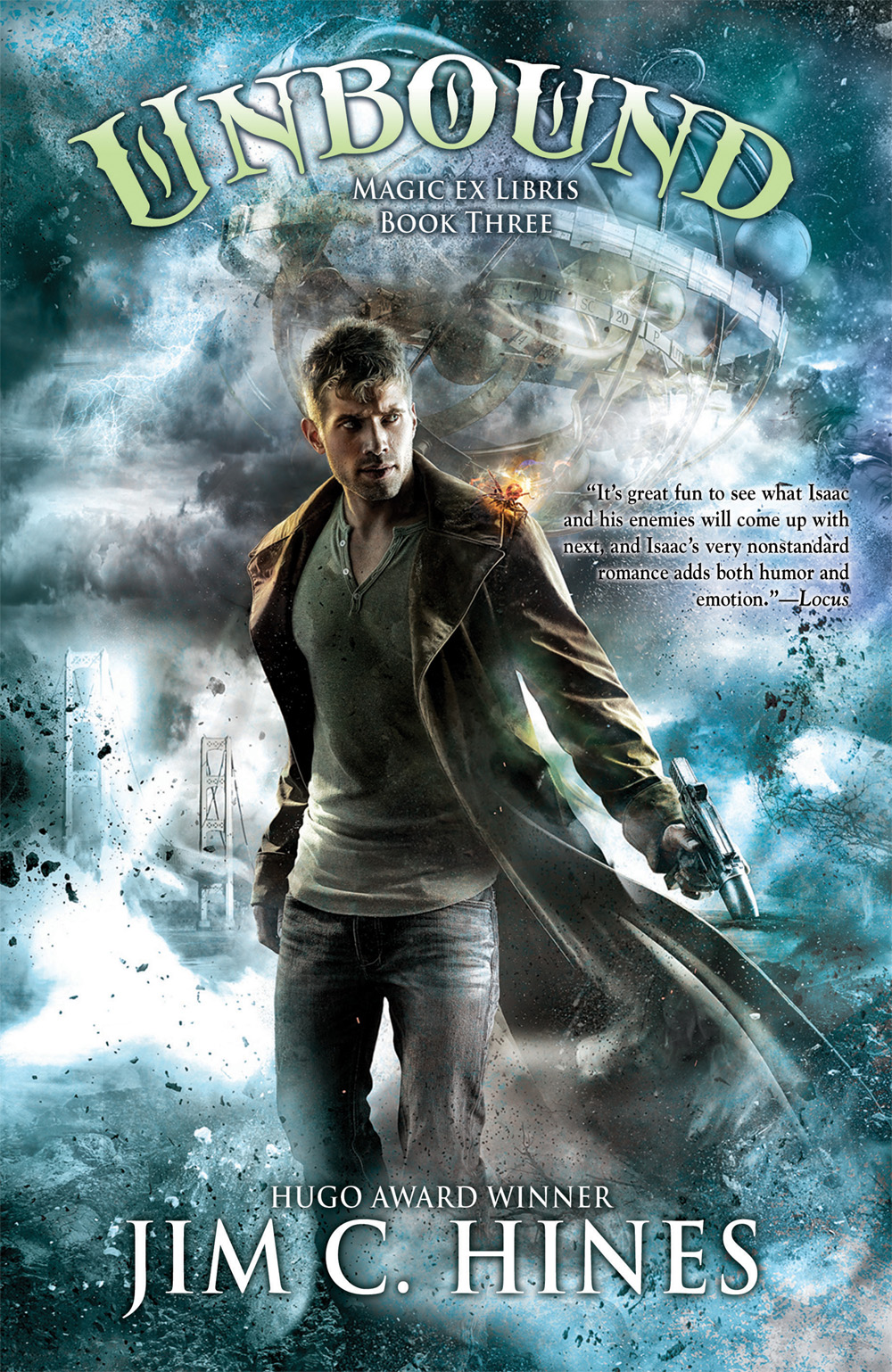 I waited three books to get to this scene.

While librarian Isaac Vainio is the protagonist of the Magic ex Libris series, pulling toys out of books and shooting sparkling vampires with Star Trek disruptor pistols, in many ways it’s his companion Lena Greenwood who’s changed the most over the course of the series.

I talked about Lena in my previous Favorite Bit piece here, back in August of 2013. She’s one of the most difficult characters I’ve ever written, but I’ve also felt she’s one who has some of the most potential for awesomeness…if I could pull it off.

Lena is a hamadryad. A nymph. A creature originally created as a sexual object, shaped by the desires and fantasies of her lovers. Over the first two books, we see some of her history. We see her struggle to take control of who she’s going to be, and to move beyond the limitations of her nature.

We also see her kicking a fair amount of ass over the course of those two books.

By the time UNBOUND comes along, Lena has grown into her own person. And now, just like Isaac works to bend the rules of libriomancy and find new ways of using magic, Lena has done the same with her own power as a dryad. We see bits of this over the course of the book, but my favorite moment comes near the end, when Lena reveals just exactly what a being who’s as much oak as flesh can do.

As our heroes make their way toward the climax of the book, a winged creature, a servant of the Big Bad, swoops out of the sky and slams Lena to the ground. They tussle a bit, and he manages to get the upper hand…

Binion cinched an arm around Lena’s neck. The other pinned her arms to her sides, preventing her from drawing her weapons. He pressed Lena’s head sideways, straining to crack her neck.

Lena wedged her chin down, trying to force it into Binion’s elbow to create a gap so she could breathe. She bent her knees and sank lower, then rammed her elbows backward.

It shouldn’t have worked. Binion was as strong as Lena. Probably stronger. But he gasped and released his grip. His hands went to his sides, where blood darkened his robe.

Lena spun to face him. Six-inch wooden spikes had grown from her elbows. Binion drew his sword and swung at her head. She blocked the blow with a forearm now covered in thick bark. The thunk of steel hitting oak echoed over the grass.

Part of why I love this scene is for the sheer badassery Lena gets to display over the course of the fight. There’s something fun and cathartic about watching the good guys finally get to cut loose and kick some butt.

But this scene also marks a turning point in Lena’s growth. She’s levelled up, learning to move beyond some of the physical and mental limitations she always believed were unbreakable. She’s discovering strength and power I’ve been waiting to write about since before I ever started writing LIBRIOMANCER.

I’m really excited about who Lena—who all of these characters—have become over the past three books. And I can’t wait to share them with everyone.

Jim C. Hines is a level 7 geek, multiclassed as a writer and customer support person. He generally wears leather thieves’ armor (with 39 hidden pockets for everything from bookmarks to a sonic screwdriver) that gives him a +2 armor class bonus. He took blogging as a bonus feat and recently spent some skill points in Sanchin-Ryu karate, earning a black belt that gives +3 to roughhousing with his children. He also put points into juggling and yo-yo tricks, because juggling and yo-yos are cool. He gets an automatic penalty to all encounters with goblins, who still haven’t forgiven him for everything he put them through in his GOBLIN QUEST trilogy. Jim is worth 350 XP. Roll on Treasure Chart F to determine what he will be carrying. For complete character stats or excerpts from his work, please check out www.jimchines.com.