During my travels, I started to notice that SFF sections in airport bookstores had disturbingly few women. So at a certain point, I started taking photos and counting. In this informal survey, only 18% of the books on sale were by women.* I should note that gender is not the only disparity in bookstores, it was just the one that I could count while waiting for an airplane.

This is what the airport SFF sections in bookstores look like. 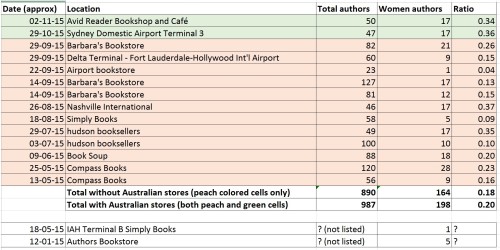 It’s easy to chalk this up to something like, “Well, women don’t write as much SFF.” The problem is that I know that the gender breakdown for published SFF in the US doesn’t support that.  According to Strange Horizons, in 2014, 53.9% were by men and 42% were by women and non-binary authors.

So why, then, were the numbers so disparate?

Fortunately, after one of my tweets, Christine Thompson, the buyer at Barbara’s Bookstore reached out. This is the only bookstore that got in touch with me. (And please note, the improvement in their numbers after I brought the matter to her attention.) She agreed to sit down with me and talk about the problem.

As we talked, it became clear that the fault doesn’t rest with a single source. It’s the result of a ton of decisions, each of which is probably fueled by unconscious bias and then reinforced by a feedback loop.

For instance… When airport booksellers are stocking books, they look at multiple factors, one of which is the print run numbers. Higher print runs mean that the publishers have more faith in that book, ergo, it will probably sell well.

When publishers have an investment in a book, they are more likely to invest co-op dollars in it. Which essentially means that they pay for endcaps and placement of certain authors. Those books sell better, because they are out in front of readers.

SFF has a long history of bestsellers written by men. So men often have higher print runs, which means… You see the cycle?

And while one can say that it’s all economics, and it’s about what people want to buy, it’s much harder to buy a book that’s not in front of you. And certainly, not all men get huge print runs. Being a guy doesn’t guarantee a stellar publishing career, but… it does stack the deck 82% in their favor.

One of the questions that came up was: “Is it the big houses?” They are the ones with the co-op dollars. I have no idea what the gender breakdown of SFF is by publishing house, but Christine thought that might account for some of the disparity. The big houses are the ones with the most money in the way of co-op dollars and print run sizes. Smaller houses might create the parity in terms of publishing numbers, but with smaller printruns might have a harder time getting representation into stores.

It happens again when you look at which books get reviews. Again, this is a major source for discovering new authors.

But the final thing that came up in our conversation was that, even if a bookseller wants to improve the representation in their store, it’s difficult to do so because catalogs aren’t sorted by gender.  This… this is something we can fix though.

That’s right. You can help crowd-source a list of women and non-binary authors in SFF in order to help book buyers create a more balanced list for their stores. Because this disparity is reinforced by reviews, which focus on authors who are publicly identified as male, it is difficult for booksellers to discover authors who are not male identified.

(tl;dr: There are a lot of guys in the bookstores. Please don’t use this list to tell us about guys, even if they’re LGBTQ.)

So, you can add books written by women and non-binary authors through this form. (Don’t worry about duplicates, I’ll clean up the list periodically, since it’s sortable.)

You can also use the list as a discovery guide.

If you had asked me, before I started this informal survey, if a young woman should choose a male pseudonym, I would have said “Absolutely not.” I am less certain now.

*Methodology: I counted the total number of authors. Then I counted the women. If I couldn’t tell and/or didn’t know, because the author used initials or a gender neutral name, I counted them as male. The reason I did this, instead of leaving them out, is because I was looking at the perception of gender rather than actual gender. If a woman is making choices to obscure her gender, that says loads about the current environment.

Edited to add: Ro Smith, in comments, has made an excellent point about how my methodology contributes to the erasure of non-binary, agender, and genderfluid authors. When I am counting this year, I’ll be counting the three categories Ro suggested: Stereotypically male names, Stereotypically female names, and gender-non-specific names.  I encourage anyone who is also counting to do the same.

37 thoughts on “Why aren’t there more women in the SFF section?”