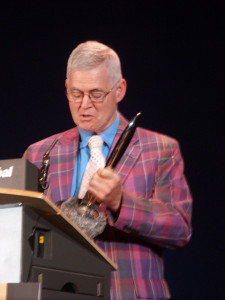 One of the things that David was known for was his flamboyant and weirdly paired outfits. It was easy to laugh at his clothing choices as either a seriously mutated fashion gene or as someone mocking the need to dress up.

But it was way more interesting than that.

Let me back-up slightly. For reasons involving a hotel screw-up, at the Nebulas in Orlando, I had a suite with two bedrooms, a fold-out couch, and a kitchen. David and his family had… no room at all. So I invited them to stay with me. Bear in mind, I’m still a brand-new author and this felt nerve-wracking and audacious to issue the invitation to David God-almighty! Hartwell.

He and Kathryn and their kids were fantastic. It wound up being like a summer beach vacation, just with, you know, one of the top editors in the field. But during this, we got to talking about clothes.

David was a fashion junkie. I know– I know exactly what you’re thinking. That a man who would wear paisley and pinstripes is not an example of sartorial sense. But wait. He collected haute couture pieces. Those jackets, terrifying ties, shirts, and trousers had been the height of fashion when it was produced.

He might spend years tracking one down. Often, he was wearing them in combinations that the designer had actually intended. When I saw him at conventions after that, we didn’t talk fiction. He would tell me the story behind whatever pieces he was wearing and talk about the designer and the theory behind why this particular combination had been fashionable in its day. He wasn’t buying clothes because they were tacky; he was buying them because he was enjoying this whole meta-conversation about fashion and taste.

It was fascinating and I wish I had taken notes.

So when I look at pictures of David and his wardrobe, I remember that his devotion to science-fiction and fantasy, yes, but also that his passion for the rare and the odd was deeply embedded. I think, in part, that might have been why he’s such a good editor.

Edited to add: Thanks to Liz Gorinsky for pointing out David Hartwell: Fashion Theorist.

And then he goes on to draw corollaries to writing. Read it.