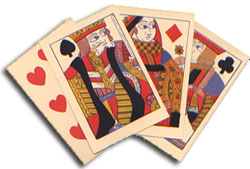 , I thought I would start to share some of research images that I was collecting while writing it. Here we have a set of eighteenth century playing cards such as one might use in playing whist.

Whist is one of those games that turns up in a number of Jane Austen’s novels, but I hadn’t actually played it until recently. Fortunately, the Oregon Regency Society was a font of information and offered the opportunity to play. In costume even. 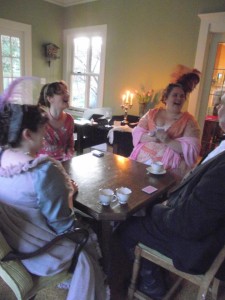 Whist turns out to be a surprisingly simple game, played with partners. It’s nice because it is simple enough that you can carry on conversation and still make a credible showing.

Here’s how card games appear in Without a Summer

Jane had taken it upon herself to host a card party, inviting all those neighbours who were willing to make the trip to Long Parkmead.

If you want to play whist on your own, you can find a good set of rules here, and order a set of reproduction cards for added fun.

Have you ever played whist?

13 thoughts on “Without a Summer: Whist”