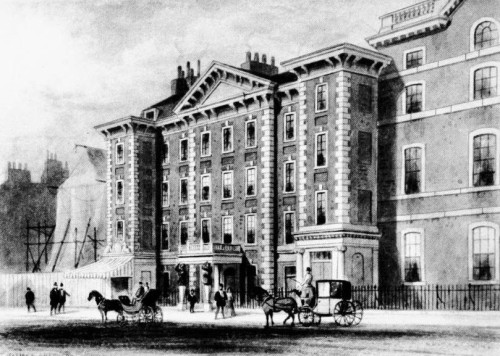 Where possible, I like to use real places. I stumbled upon Schomberg House when I was trying to figure out how much a glamourist like Vincent would make and what sort of housing he could afford. Schomberg served as the home of several members of the Royal Academy of Arts during its lifetime.

It also had a very interesting history that I could not work into the novel, no matter how much I wanted to. In 1781, a Scottish doctor by the name of James Graham turned it into “Temple of Health and Hymen” complete with “celestial bed” which was supposed to be a cure for infertility. It had early electrical devices– That’s right. Electrical. They didn’t actually do anything but by God they were Science. According to Wikipedia:

His “wonder-working edifice” was 12 by 9 feet (37 by 27 dm), and canopied by a dome covered in musical automata, fresh flowers, and a pair of live turtle doves. Stimulating oriental fragrances and “aethereal” gases were released from a reservoir inside the dome. A tilting inner frame put couples in the best position to conceive, and their movements set off music from organ pipes which breathed out “celestial sounds”, whose intensity increased with the ardour of the bed’s occupants. The electrified, magnetic creation was insulated by 40 cut glass pillars. At the head of the bed, above a moving clockwork tableau celebrating Hymen, the god of marriage, and sparkling with electricity, were the words:

“Be fruitful, multiply and replenish the earth!”[2]

I so wanted to use that, but it just wasn’t in the cards.

By the time Without a Summer opens, in 1816, Dr. Graham is long gone. The center of the building was a bookseller and the other parts of the house belonged to a haberdasher, an auctioneer and a picture dealer. In my alternate history, No. 80 Pall Mall was available to rent and just the establishment for The Prince Regent’s glamourists.

Here’s how it first appears in Without a Summer.

“That is not just a bookseller; that is our home.” As the carriage pulled up in front of a handsome red brick building, Vincent opened the door and stepped out.
The façade was striking, with a total of five bays, three that projected slightly toward the street while the two end bays jutted forth almost like towers framing the building. The whole structure rose four stories above the foundation, with a multitude of narrow windows. The house had been divided into three addresses at some point, with the one in the centre being taken up by Beatts and Co., Booksellers, and the one to the right being occupied by McGean’s Cloth, Laces, and Ribbons. They were to occupy No. 80, on the left.

The facade is still standing, but the interior no longer exists. Oh… I have a tuckerization in the paragraph above. That is not the name of the original bookstore. Any guesses as to why I picked that one?

3 thoughts on “Without a Summer: Schomberg House”