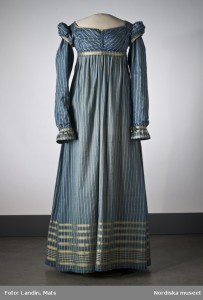 Today, I have a dress for you. This is an extant dress that’s in the Nordic Museum. You can see the sides, back and details at the museum’s site. While there were differences in fashion from country to country, this is something that would have been at home in an English parlour during the day. Here’s how it turns up in Without a Summer.

In the parlour, Melody sat in one of the straight-backed chairs by the sofa. She wore a celestial blue day dress that set off her eyes to advantage. A heavy cream wool shawl warded her from some of the chill. Behind her, Betsey presided over the tea tray, but spent most of her time glancing at the two gentlemen who shared the room with them. Jane dismissed her with a nod and the girl bustled out of the room.

She would have also worn a fichu, a sort of lace scarf around her neck and shoulders, but those were so ubiquitous for day wear that it wasn’t the sort of thing that Jane would even notice. It’d be like noticing that someone was wearing socks with their shoes. They’d have to be really special socks to note them. The absence of the fichu during the day, on the other hand, would catch her eye.

As a side note, when I’ve been in period dress, I’ve been impressed by how much warmer I am with the fichu on, even when it’s lace. I’ve also noticed, in modern dress, that the pashmina shawls you can pick up in airports and the like, you know the ones– people tend to wrap them around their necks like scarves — those are the modern rendition of the fichu. They are nothing alike in appearance, but serve a similar purpose. Keeping you warm and stylish.

2 thoughts on “Without a Summer: Melody’s celestial blue day dress”