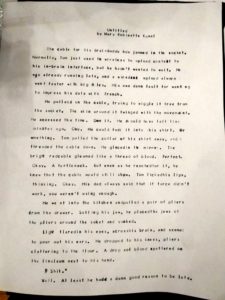 I’d like your opinion. I do this thing, sometimes, where I take a typewriter and write one page flash fiction on demand. At the opening of Volumes BookCafe, I wrote five during the course of the evening. They’re fun, light, and take me about fifteen minutes. That’s a photo of one of them. (I’ll post a transcript down below, minus the typos.)

Here’s how it works.

So… if I were to offer this as a fundraiser at a convention, what seems like a reasonable suggested price per story?

Which good cause? Depends. I just figured this might be more fun than offering an ARC or a manuscript critique. You know, watch Mary sweat as she tries to make your suggestion into a story and all that. Anyway, point being, I have no idea at all what to suggest for pricing.

And, as promised, here’s the transcription of this goofy little story.

The cable for his BrainBuddy had jammed in the socket. Normally, Tom just used the wireless to upload content to his in-brain interface, but he hadn’t wanted to wait. He was already running late and a wired upload always went faster with big files. His own damn fault for wanting to impress his date with French.

He pulled on the cable, trying to wiggle it free from the socket. The skin around it twinged with the movement. He accessed the time. Damn it. He should have left five minutes ago. Okay. He could tuck it into his shirt. Or something. Tom pulled the collar of his shirt away, and threaded the cable down. He glanced in the mirror. The bright red cable gleamed like a thread of blood. Perfect.  Okay. A turtleneck. But even as he reached for it, he knew that the cable would still show. Tom licked his lips, thinking. Okay. His dad always said that if force didn’t work, you weren’t using enough.

He went into the kitchen and pulled a pair of pliers from the drawer. Setting his jaw, he placed the jaws of the pliers around the socket and yanked.

Light flared in his eyes, across his brain and seemed to pour out his ears. He dropped to his knees, pliers clattering to the floor. A drop of blood spattered on the linoleum next to his hand.

Well. At least he had a damn good reason to be late.

PS You should click on the photo to look at the type. It’s a sans serif from the 1930s and is really gorgeous and Deco.

31 thoughts on “Typewritten stories for fundraisers. A pricing conundrum.”