Stephanie Buris is joining us today to talk about her novel Masks and Shadows. Here’s the publisher’s description:

The year is 1779, and Carlo Morelli, the most renowned castrato singer in Europe, has been invited as an honored guest to Eszterháza Palace. With Carlo in Prince Nikolaus Esterházy’s carriage, ride a Prussian spy and one of the most notorious alchemists in the Habsburg Empire. Already at Eszterháza is Charlotte von Steinbeck, the very proper sister of Prince Nikolaus’s mistress. Charlotte has retreated to the countryside to mourn her husband’s death. Now, she must overcome the ingrained rules of her society in order to uncover the dangerous secrets lurking within the palace’s golden walls. Music, magic, and blackmail mingle in a plot to assassinate the Habsburg Emperor and Empress–a plot that can only be stopped if Carlo and Charlotte can see through the masks worn by everyone they meet. 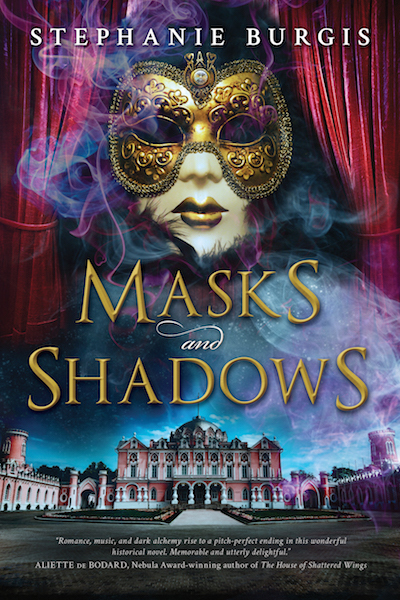 I still remember the first opera I ever saw. I was a teenager, and I was a musician-in-training, so when a touring opera company came to town to perform Tosca, my mom thought it would be a good experience for me to attend. She warned me that while some people love opera, others really hate it, but she thought I probably ought to give it a try.

I was curious, and a little bit skeptical, but I thought it might be fun…and I hoped at least it wouldn’t be too boring. I sat in the rustling, waiting audience as people took off their coats, chatted and read their programs, and the orchestral musicians in the opera pit tuned their instruments. As usual, I craned my neck to see whether there were any women musicians in the brass section (because I was a French horn player, getting ready to head off to music conservatory in a few years).

Then the lights went out. The overture began. The singers came onstage…

And ohhhhhh. I didn’t just love opera. I LOVED opera! As I sat there, unmoving, barely breathing for the next few hours, I was swept out of myself into a heightened state of sensation.

I had found a new obsession!

The drama. The wildly over-the-top romance. The heartbreakingly gorgeous music that intensified every single moment of the story. The whole concept of music AND story, so seamlessly joined together, without a single break for spoken words!

I was someone who’d known ever since I was seven that I wanted to be a writer, but I’d also been planning since I was thirteen to be an orchestral musician as my day job. (I never claimed to be a practical person!)

Opera took everything I loved most and put it all together into something bigger. Something amazing.

I came home from that first performance feeling as if I were floating. If I had had a decent singing voice, I would have dreamed of being an opera singer, but that wasn’t an option for me. Instead, I went on to music conservatory to study French horn performance and music history, and I was happy whenever I got the chance to play in the orchestra pit for any opera. Then – because I’d figured out that an orchestral job wasn’t my dream after all – I went to grad school to study opera history, which felt at least closer to what might really make me happy…and then, three years into my PhD degree, I saw a job opening at my local opera company.

Well…as it turned out, it wasn’t a perfect job. Not really. But for those couple of years, I got to live and breathe opera as a living, creative force, as part of the company that made it.

And every single one of those experiences came together as I was writing Masks and Shadows.

But every single plot is centered around the famous opera house in the glittering, luxuriant eighteenth-century palace of Eszterháza, where Joseph Haydn was busily creating his own operas (which I’d studied in detail, all those years ago, in my PhD work on the opera and politics of eighteenth-century Vienna and Eszterháza).

And I wrote this novel itself as an opera. It’s divided into acts, not into parts. The characters’ plots weave together in just the same way that they would in an eighteenth-century opera, complete with dramatic finales at the end of the different acts. The romantic hero is a castrato, one of the superstar singers of the century. The romantic heroine’s maid, in a moment of crisis, gets transplanted from her former working life to become a professional singer in Haydn’s opera troupe – and finds that shift exactly as hard and as transformative as you might imagine!

Villains come up with ruthless schemes; people fall in love when they absolutely shouldn’t; dark magic swirls through the shadows of the palace; and betrayals and redemption take place while the most astonishingly beautiful music is created behind it all…

And that is my very favorite bit of the novel: my own attempt, using words alone, to summon that shimmering sense of something bigger – something amazing – that I experienced for the first time when I was a teenager, at my very first opera performance.

Stephanie Burgis grew up in East Lansing, Michigan, but now lives in Wales, surrounded by castles and coffee shops. She has published over thirty short stories in various f/sf magazines and anthologies, including Strange Horizons, Daily Science Fiction, and Beneath Ceaseless Skies. She is also the author of the Kat, Incorrigible trilogy of MG Regency fantasy adventures (known in the UK as The Unladylike Adventures of Kat Stephenson), and is a graduate of the Clarion West writing workshop.