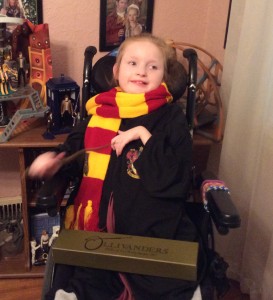 I went to three conventions in the past month and a half. I’ve realized a thing, which is going to require me telling this out of sequence.

At the last convention, GenreCon (which was amazing), in Brisbane Australia, I initially thought the hotel was sharing space with a medical convention, because I saw a higher percentage of wheelchair users than I’m used to seeing. It wasn’t until after the convention, when I was out in the city, and that same high percentage was there, that I realized what I was really seeing.

There are Braille trails everywhere, which are bumpy guidelines in the pavement. Curb cuts are everywhere. Ramps. Elevators. Wide doors. What I was seeing wasn’t a higher percentage of wheelchair users than, say, Chicago has — what I was seeing was what the world looks like when people can actually access places equally.

Flash backwards to the Surrey International Writers Conference, which is my favorite conference. I’ve noticed a wheelchair users there, which I’d not given much thought to, honestly. In hindsight, I’m realizing that SiWC is an accessible convention. Wide aisles, elevators, level speaker spaces, microphones…

Flash backwards to NerdCon: Stories. This convention was amazing. Truly. I will go again, and again. One of the things that I noticed, right away, was that they had a sign language interpreter. In hindsight, again, I’m realizing that there’s a reason that I saw more than one group of fans conversing in ASL. Not because there are more in Minneapolis, but because this is what fandom looks like when it is accessible.

Most of the conventions I go to are fan run. They start as a big party and then grow. So, it’s understandable why a first year con might not think about being ADA compliant. But after the first year… there’s no reason why a panelist should have to address a room from the floor, while the other panelists are elevated on a platform. Simple things like, don’t registration in a space that’s not accessible by wheelchair users. Have websites that are accessible for the blind.

The thing about Brisbane that was eye-opening was that the wheelchair users weren’t disabled there. By which I mean that the city did not make them unable to experience it in equal measure with bi-pedal people.

It’s not that hard to do. At SFWA, the Nebula Awards Weekend has a disability coordinator whose whole job is just to make sure it’s compliant. And compliant sounds all legally and scary — but really, it just means being considerate and inclusive. It means making active choices to not disable the attendees. That’s what accessible means.

ADA compliance isn’t about not getting sued, folks.

20 thoughts on “Thoughts on accessibility at conventions”