Martin Rose is joining us today to talk about his novel My Loaded Gun, My Lonely Heart. Here’s the publisher’s description:

Vitus Adamson has a second chance at life now that he’s no longer a zombie. But after killing his brother Jamie, Vitus lands in prison on murder charges. Jamie’s death exposes secret government projects so deep in the black they cannot be seen—without Vitus, that is.

Sprung from jail, the government hires Vitus to clean up Jamie’s messes, but tracking down his brother’s homemade monsters gone rogue is easier said than done. The first of them is a convicted killer assumed to be safely behind bars. However, it appears he is still committing murder through his victim’s dreams. High on Atroxipine—the drug that once kept him functioning among the living—and lapsing into addiction, Vitus’s grip on reality takes a nasty turn when his own dreams begin slipping sideways.

Vitus’s problems multiply as he deals with his failed friendship with wheelchair-bound officer Geoff Lafferty, his wrecked romance with the town mortician Niko, government agents working for his father, sinister figures lurking in the shadows, and, least of all, the complications of learning how to be human again.

Secret agents, conspiracy theories, broken hearts and lonely souls, the siren song of prescription drugs . . . in My Loaded Gun, My Lonely Heart, readers are invited to discover life after undeath, where there are no happy endings. 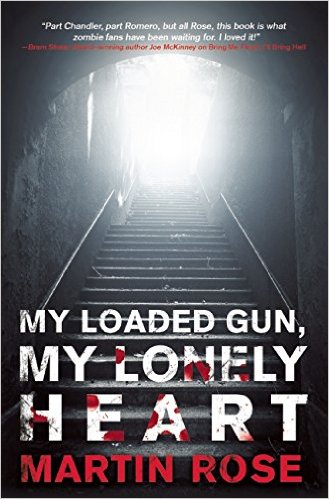 Picking a favorite bit of a novel is tricky business; I’d love to wax rhapsodic about the character of Elvedina, or discuss in-depth my particular love of government conspiracy theories (think Jon Ronson’s The Men Who Stare At Goats) but I fear to reveal too much and take the pleasure of discovery away.

Instead, let me tell you about vultures.

Not the sort of animal people think of when they ponder a few of their favorite things, but for me, the vulture holds a special place in my life. When I first wrote Bring Me Flesh, I’ll Bring Hell, it amused me to think that the natural pet of a sentient zombie would of course, be a scavenger bird. But by the time I found my stride while writing My Loaded Gun, My Lonely Heart, the much maligned turkey vulture had taken on a whole life of its own, insinuating itself into the scenes, from whimsical atmosphere builder to a critical force upon which plot would come to rely on.

Take the time to watch Jim Henson’s Dark Crystal to get the full flavor of Skeksis creepiness, and you have the turkey vulture on a smaller scale and with less robes – ugly, wrinkly head jutting like a periscope above a pile of feathers. Commonly spotted along roadsides attending its macabre road-kill buffet. However, this was not how I garnered my weird love for this hideous member of the avian family; it happened when I was twenty-two, doing security at a state park.

I was fresh in the wake of a family tragedy and lurching from day to day in a state of numbness. In the mornings I’d hoist the flag in the gloaming before sunrise and then walk the grounds in the midst of hundreds of thousand acres of pristine pine forest and open up the lakeside buildings. I’d approach from a distance before I arrived at the sandy banks of the lake, with the sun cresting the edge of the forest trees.

Arrayed before me on the shore, a long, straggling line of turkey vultures. They stood abreast of each other and shook out their wings, holding them half-cocked, tip to tip, worshiping the sun at the water’s edge. They warmed themselves, leaving only at the first sign of human trespass. Massive and saturnine. If one lives a thousand lifetimes, few things measure up to the stillness and intensity of watching, unobserved, the secret ritual of these carrion eaters. I will carry it with me to my deathbed.

Before I reach that final destination, however, I suffice to carry it into story instead; I plucked a vulture from memory and resurrected it in My Loaded Gun, My Lonely Heart. Here, this vulture lives and breathes as one of my favorite bits, one of my favorite parts.

Martin Rose’s fiction spans genres with work appearing in numerous venues, such as Penumbra and Murky Depths, and various anthologies: Urban Green Man, Handsome Devil, and Ominous Realities. Bring Me Flesh, I’ll Bring Hell, is a horror novel published by Talos in 2014, and has been recognized as one of “Notable Novels of 2014” in Best Horror of the Year, Vol. 7.