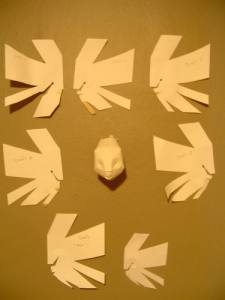 I finally hit on the final pattern for Coraline’s face, today. Just for kicks, I took a picture of all the drafts that made it to pattern stage. There were, I don’t know, maybe five other iterations of her face that weren’t good enough to pattern. Making the lips happen was a pain in the hiney. I got the shape of them fairly quickly, but her chin went weak, because the paper was now folding in slightly different places. Look at the patterns on the wall. The differences of some of them are fairly subtle, huh?

Basically, what I do is I get a pattern that I like, then I tweak it, trying to edge it closer to what I want the final to look like. If I like what I see, I cut it apart to make it into a pattern. I made six during this venture, which is not so bad. Once I had the one that I liked, I scanned it and scaled it down. See the two bottom patterns? The smallest one is my scaled down final.

I then traced it on the water-color paper, intending to check two things. 1. I needed to make sure I’d gotten it down to the right size. 2. I needed to make certain that the paper could take the folds when it was that small. Both work, although, I botched this head almost immediately by getting glue on the outside. That will keep the paint from going on evenly. Alas. I kept going anyway since that wouldn’t stop me from finding out what I needed to know.

Making a final head differs from a draft in only a few ways. The paper that I’m using is stiffer, but it’s also a little more forgiving.

And now a demonstration of the structural integrity of paper sculpture. Bear in mind, this is before I add the papier-mache to the interior to reinforce it.

4 thoughts on “The many faces of Coraline”