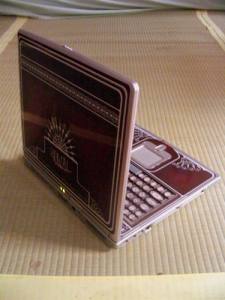 Look what I’ve got. The first Kowal Portable Typewriter and Adding Machine.

I mentioned that I wanted to modify my computer to have some of the stylings of a portable typewriter. After a great deal of thought I decided to go with sticker applications on the keys due to the wee attachment points on the existing key caps. To create the sticker, I started by taking a photo of my keyboard as close to straight on as I could. If I do this again, I will scan it instead.

Next I grabbed a stock photo of a typewriter key. Now, since the computer keyboard has a lot of keys that a manual typewriter doesn’t, I knew that I would have to create keys from scratch. So, I erased the letter on this one and used it as the template for all the keys. For the font I chose P22’s Parish Roman, which is a gorgeous spin on the standard Roman fonts. You’ll see how lush it is in the next photos.

I’m about halfway through the process in this photo. I used a piece of paper to make a template to cut the keyboard area of the sticker to the right size. As you can see, I wound up with silver space all the way around, but in my original, I was going to run the sticker right up to the edge of the keyboard. I think the image was enlarged slightly when they placed it on the sticker. The process of modifying the keys is pretty simple. Here– I’ll show you.

And here it is in all its glory. 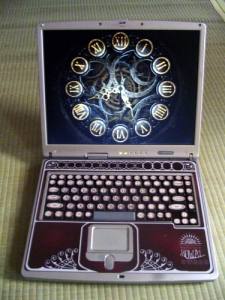 Well, not quite all its glory. I still have to do the space bar, but I need to go to an art store for that. I’m debating about doing the space around the screen itself, which would be pretty, but just seems like a lot of wasted sticker, unless I can come up with something clever to do with the middle section. Hm, I guess I could do a style thing to the power supply… Nah. That would just be silly.

Edited to add: In response to comments.

Further edited to add: The fine folks at schtickers.com have said that they would like to offer readers of my blog a 10% discount. Just enter the discount code KOWAL during the check out process. You might also want to use their old interface, as the new one does some resizing that might frustrate you.

Even further edited to add: I made a Deco version for my new computer.

96 thoughts on “The Kowal Portable Typewriter and Adding Machine”