TJ Klune is joining us today with his novel The House in the Cerulean Sea. Here’s the publisher’s description:

Linus Baker is a by-the-book case worker in the Department in Charge of Magical Youth. He’s tasked with determining whether six dangerous magical children are likely to bring about the end of the world.

Arthur Parnassus is the master of the orphanage. He would do anything to keep the children safe, even if it means the world will burn. And his secrets will come to light.

The House in the Cerulean Sea is an enchanting love story, masterfully told, about the profound experience of discovering an unlikely family in an unexpected place―and realizing that family is yours. 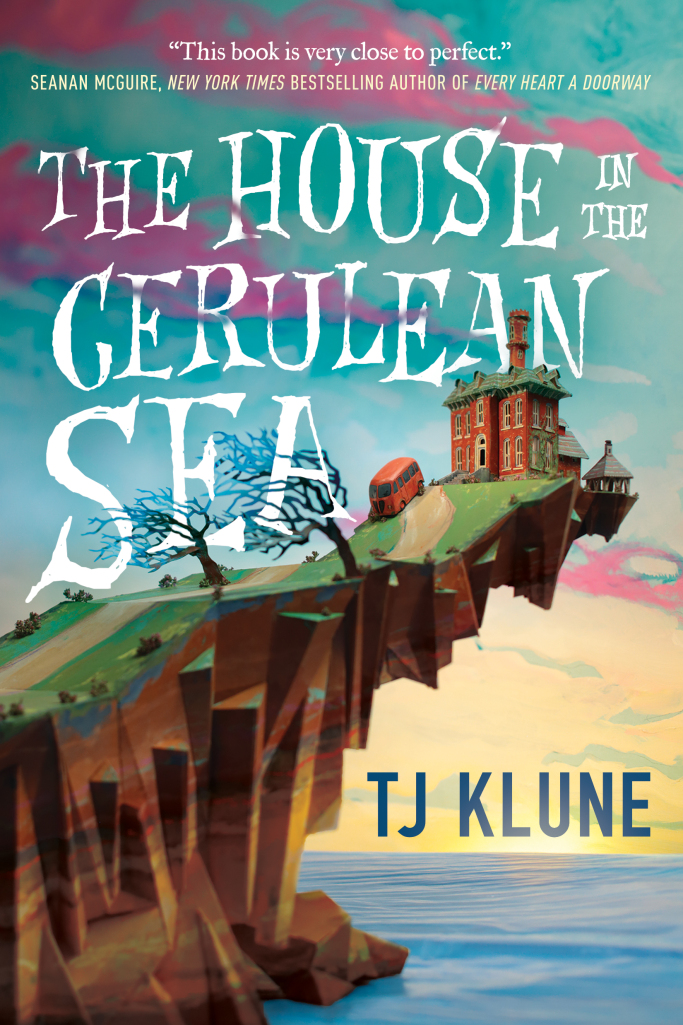 In the fantastical world of The House in the Cerulean Sea, the lead character, Linus Baker—a fussy, portly man in his forties with an extreme appreciation for following the rules—is sent by his employer, the Department in Charge of Magical Youth (DICOMY), on a top secret assignment to investigate a mysterious orphanage that houses what he’s told are the most dangerous children in the world. Unsure of what he’ll witness when he arrives at said orphanage makes Linus extremely nervous, but it doesn’t stop him from doing what he was sent to do. By god, he’ll follow the rules to the letter, and no one will stop him.

Or so he thinks.

An early section of the novel contains what is perhaps my favorite scene in the entire book. Linus, having been summarily welcomed by the orphanage’s inhabitants one by one, joins this funny little family for dinner, all the major players joined together for the first time. There’s Talia, the fierce garden gnome. Theodore, the small wyvern. Phee, a forest sprite. Sal, the shy and nervous were-pomeranian. Chauncey, who is something (no one is quite sure what beyond that he’s a green blob with tentacles). And last—but certainly not least—the Antichrist himself, a six-year old boy named Lucy.

They are joined by the peculiar Zoe Chapelwhite, whose role at the orphanage is unknown to Linus, and Arthur Parnassus, the master of the orphanage and the children’s greatest protector, rounds out those seated at the table with Linus.

The intended purpose of this scene is to introduce the dynamic of the people at this orphanage, through the eyes of Linus, who begins to realize almost immediately that he’s in over his head. The conversation flies fast and quick, Linus is barely able to keep up as the children question him to the point of interrogation, all while some of them display their impossible powers, much to Linus’s dismay.

But it turned into so much more than that, from a writerly perspective.

Long-time readers of mine know that I have a fascination with gatherings such as this, where dynamics between people are on full display, characters showing their true selves, whether it’s asked for or not. The aim is for the reader—and Linus—to feel like they’re in the middle of a ferocious tornado, swept up and unable to do much but go along for the ride and hope for the best.

Linus has preconceptions about what he was to see during these investigations. He’s good at what he does and has been to more than a few orphanages during his employ as a caseworker with DICOMY. But nothing he’s seen can prepare him for this first dinner, and it starts his journey where everything he thought he knew will turn out to be…not quite a lie, but not exactly as he was led to believe.

Everyone has something to say, and they talk over each other, laugh loudly, whispering excitedly. Though Linus doesn’t quite realize it at that point, the children are also nervous, wary of who Linus is and what he represents. They may be young, but they know what he’s there for, and the power he wields.

But at the same time, they’re still children, and they act as such. They ask questions to a flummoxed Linus, who barely gets a chance to answer before Lucy—in his infinite wisdom—decides he would like to look like Linus, a rotund fellow. And so Lucy does, expanding his body until he too is round, ribs cracking, body inflating. It’s not meant to mock Linus, but Lucy—the scion of the Devil—is only six, and has a six year old’s imagination.

It’s played for comedic effect, but Linus doesn’t see it as that, at least not at first. All he sees are children with tremendous power, enough that it could potentially lead to the end of the world. And while it all scares Linus, it opens his eyes that the world isn’t quite how it should be, and that he played a part as a cog in a bureaucratic machine that feeds on fear of the unknown. That cracked-open door, the one Linus thought (and most likely prayed) would never be opened, begins to do just that. On the other side of this door is Linus’s exploration into the truth, and I know that Linus will one day—and one day soon—walk through that door with his head held high.

But what I love most about this scene, and why I keep coming back to it, is because while the children do have strange and wonderful powers, they’re innocent. They’ve known pain and suffering but have found safety in the walls of their home. They’re allowed to express themselves however they wish, something they’d been missing before Arthur took them in. Linus may be a perceived threat, but this is their home, and they won’t let it be taken from them without a fight. And while we always see them through Linus’s eyes, I love to think that before he arrived, these meals played out the exact same way: loud and boisterous and more than a little chaotic.

Hope, Linus learns, is a weapon, and one that when wielded by deft hands, can bring about the change so desperately needed. All it takes is a little kindness, more than a little luck, and the strength of conviction and family. That’s what this scene entails: hope and love and the power of the people we care about more than anything.

The House in the Cerulean Sea Universal Buy Link

TJ KLUNE is a Lambda Literary Award-winning author (Into This River I Drown) and an ex-claims examiner for an insurance company. His novels include The House in the Cerulean Sea and The Extraordinaries. Being queer himself, TJ believes it’s important—now more than ever—to have accurate, positive, queer representation in stories.