T. L. Costa is joining us today with her debut novel Playing Tyler.

When is a game not a game?

Tyler MacCandless can’t focus, even when he takes his medication. He can’t focus on school, on his future, on a book, on much of anything other than taking care of his older brother, Brandon, who’s in rehab for heroin abuse… again.

Tyler’s dad is dead and his mom has mentally checked out. The only person he can really count on is his Civilian Air Patrol Mentor, Rick. The one thing in life it seems he doesn’t suck at is playing video games and, well, thats probably not going to get him into college.

Just when it seems like his future is on a collision course with a life sentence at McDonald’s, Rick asks him to test a video game. If his score’s high enough, it could earn him a place in flight school and win him the future he was certain that he could never have. And when he falls in love with the game’s designer, the legendary gamer Ani, Tyler thinks his life might finally be turning around.

That is, until Brandon goes MIA from rehab and Tyler and Ani discover that the game is more than it seems. Now Tyler will have to figure out what’s really going on in time to save his brother… and prevent his own future from going down in flames. 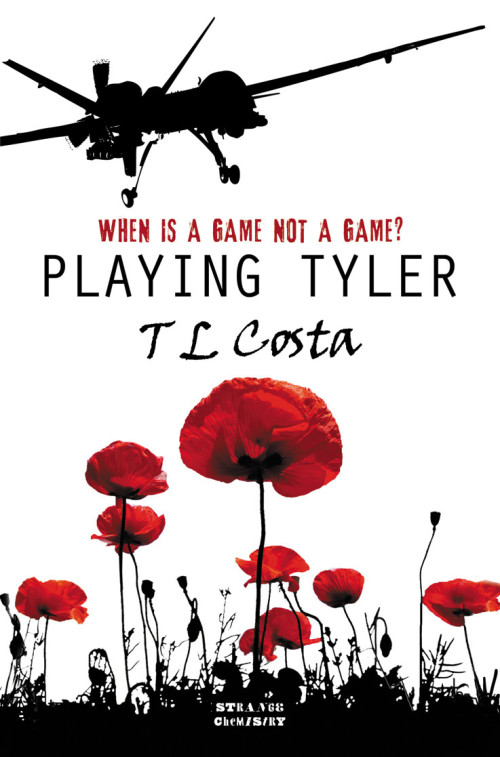 My favorite thing about this book is my main character, Tyler.

Not having an agent or a publisher when I first sat down to write the book three years ago, all I knew was that I needed to write a book about drones and ethics and the future of warfare.

So when I sat down and began to write Tyler, I knew the basics. I knew he had attention deficit hyperactivity disorder, a condition that I am all-too familiar with, I knew his birthday, his favorite snack, but it wasn’t until I gave him his voice that he became real to me. His voice, with its relentless, furious pace, became a reflection of his personality, of his situation, of his relationships.

I would go to the mall, the grocery store, the bank, and ask myself, “What would Tyler notice?” “How would he see this situation that I’m in right now?” It reminded me a bit of how I would prepare to play a certain character onstage. I would close my eyes, and then, when I opened them next, pretend I was my character as they observed their surroundings. What would they order at a coffee shop? What would they write in a text to a friend?

I love Ani, too. The story is told in a dual narrative and she was a joy to write. A game-designing prodigy, she’s brilliant and tough and willing to stand up to authority to carve a place for herself in the world. She is everything I would have wanted to be when I was sixteen. But there is something special about Tyler.

This kid, despite his disadvantages, fights for his future, for the future of the people he loves, without giving it a second thought.  He is open and honest and, inevitably, oh-so-confused by Ani, his crush.

The openness of his character, the way he sees the world, the way he wants so much to be a hero, to be somebody, the way he makes very human mistakes and learns from them, all of it had to be reflected through his voice.

It was great fun to write, I sincerely hope it will be as much fun to read.

T. L. Costa is a graduate of Bryn Mawr College and has a Masters of Teaching from Quinnipiac University who taught high school for five years before becoming a full-time mom and writer.

She has lived in Texas, New York, New Jersey and Spain. Currently, she lives in Connecticut with her husband and two children.