Rysa Walker is joining us today to talk about her novel Now, Then, and Everywhen. Here’s the publisher’s description:

When two time-traveling historians cross paths during one of the most tumultuous decades of the twentieth century, history goes helter-skelter. But which one broke the timeline?

In 2136 Madison Grace uncovers a key to the origins of CHRONOS, a time-travel agency with ties to her family’s mysterious past. Just as she is starting to jump through history, she returns to her timeline to find millions of lives erased—and only the people inside her house realize anything has changed.

In 2304 CHRONOS historian Tyson Reyes is assigned to observe the crucial events that played out in America’s civil rights movement. But a massive time shift occurs while he’s in 1965, and suddenly the history he sees isn’t the history he knows.

As Madi’s and Tyson’s journeys collide, they must prevent the past from being erased forever. But strange forces are at work. Are Madi and Tyson in control or merely pawns in someone else’s game? 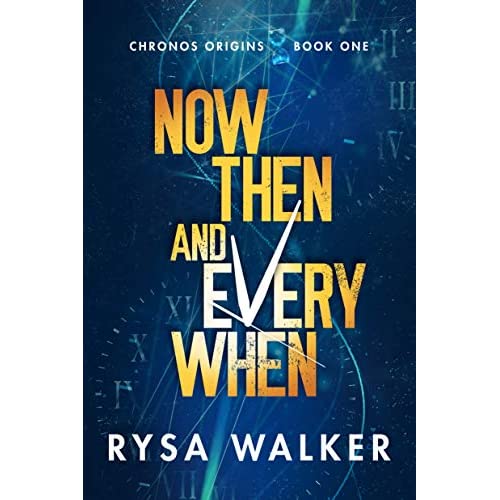 Selecting a favorite bit from Now, Then & Everywhen wasn’t easy. My first inclination was the music—any book that required me to listen to the Beatles as legitimate research gets a thumbs up. Digging into obscure history from the mid-1960s South was also a high (and occasionally, low) point of writing this book, since my previous time-travel forays focused primarily on earlier historical eras.

But in the end, I picked a character we never meet directly in this book—James Lawrence Coleman, an extraordinarily prolific and eclectic author from the late 21st century. I’m pretty sure the reason this character sticks with me is that he caused me to question one of my core beliefs.

I am descended from several generations of police officers. In most respects, the law enforcement gene skipped me. This was evidenced not just by my academic career, but also by the Question Authority bumper-sticker on my car. Shortly after I began teaching, however, I discovered that on the issue of plagiarism, I possessed a zero-tolerance, Just-Say-No fervor. If I suspected a paper was lifted, in whole or in part, from another source, I went into forensic mode, determined to track down the evidence.

Having worked my way through graduate school as a single mom, I was far from authoritarian about due dates and forgiving when students needed some leniency. Ask for an extension, I told them. Turn it in late, and deal with a few points off. There was no excuse, however, for plagiarism. None. I posted a picture of the Klingon devil in my online syllabus, noting that any hint of plagiarism caused me to morph into that creature. Many failed to heed my warning and faced the wrath of Fek’lhr.

When writing this first book in the CHRONOS Origins series, however, I was confronted with a plagiarist I couldn’t fault. In fact, I had to admit that in his place, I’d almost certainly have done the same thing.

Imagine your favorite book by your favorite author. The book that had the greatest impact on your life. The one you curl up inside when the real world sucks.

Now imagine you are the only person in possession of that book. In the universe where you now find yourself, it was never written. Maybe the author was never born. Maybe the manuscript landed on a different agent or publisher’s desk, and the author, despondent at a stack of rejections, stashed the manuscript in a desk drawer or torched it in the fireplace, and never looked back.

Add to this the fact that you have, in your possession, hundreds of these books in a library that contains not just works from your own corner of the multiverse, but those from several other timelines. You also have history books in this library showing the way things might have gone—and in some cases, might still go, if leaders chose a wiser path. Science books, too, with discoveries that might be delayed or never made at all without the core component in that volume.

James Lawrence Coleman inherited just such a library from his mother, who salvaged a thumb drive with many of the books her own grandmother collected from a half-dozen timelines. All those stories, all those histories, all that knowledge…and since he couldn’t acknowledge the works were from other timelines, the only way to share was to publish them.

I hope that I’d be able to resist the temptation to publish them under my own name. My inclination would be to spin off a few dozen pen names rather than straining credulity by claiming to write thousands of books. I’d definitely be more diligent in determining whether the real author might still exist. But like Coleman, I’m certain I wouldn’t be able to resist sharing the works of Shirley Jackson, Ray Bradbury, or J. K. Rowling, to name but a few. The Princess Bride, A People’s History of the United States, The Stand, and Flowers for Algernon would not be restricted to my shelves alone—even if I had to resort to a little plagiarism in order to share them with the world.

But my dreams would probably be haunted by Fek’lhr.

Rysa Walker is the author of the bestselling CHRONOS Files series. Timebound, the first book in the series, was the Young Adult and Grand Prize winner in the 2013 Amazon Breakthrough Novel Awards. The CHRONOS Files has sold nearly half a million copies since 2013 and has been translated into fourteen languages. In addition to speculative fiction, Walker writes mysteries as C. Rysa Walker, occasionally in collaboration with author Caleb Amsel. Rysa currently resides in North Carolina with her husband, two youngest sons, and a hyperactive golden retriever. When not working on the next installment in her CHRONOS Files universe, she watches shows where travelers boldly go to galaxies far away, or reads about magical creatures and superheroes from alternate timelines.

**For news and updates, subscribe to the newsletter at rysa.com/contact.**