AJ Fitzwater is joining us to talk about their novel The Voyages of Cinrack the Dapper. Here’s the publisher’s description:

Cinrak the Dapper is a keeper of secrets, a righter of wrongs, the saltiest capybara on the sea and a rider of both falling stars and a great glass whale. Join her, her beloveds, the rat Queen Orvilia and the marmot diva Loquolchi, lead soprano of the Theatre Rat-oyal, her loyal cabin kit, Benj the chinchilla, and Agnes, last of the great krakens, as they hunt for treasures of all kinds and find adventures beyond their wildest dreams. Let Sir Julius Vogel Award-winning storyteller A.J. Fitzwater take you on a glorious journey about finding yourself, discovering true love and exploring the greatest secrets of the deep. Also, dapperness.

The Voyages of Cinrak the Dapper includes seven stories about Cinrak and her crew: 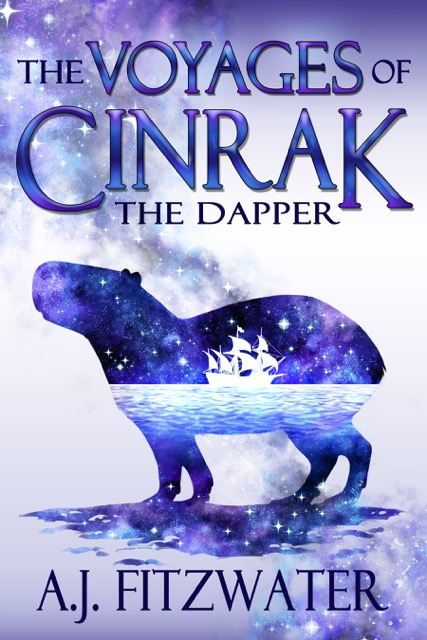 I can tell a decent joke about once a decade.

That’s my dry, self deprecating kiwi humour right there.

Seriously though, I thought writing humour was not one of my strong points. Neither historical fantasy and romance. Yet my first books being published this year are humour (“The Voyages of Cinrak the Dapper”, Queen of Swords Press) and historical fantasy romance (“No Man’s Land”, Paper Road Press)!

I wrote “The Voyages of Cinrak the Dapper”, about a lesbian capybara pirate and her found family of delightful misfits, completely by accident. The original story that kicked off Cinrak’s journey, “The Wild Ride of the Untamed Stars”, was a whimsical piece written for my natcon’s short story competition. Having no expectations of the piece, I made it as silly as possible. The first major pun was basing the character of soprano marmot diva Loquolchi on the marmot Queen of the Night meme. Cinrak has a magical “Alice” pocket in her snappy vest. The rat queen Orvillia offers her hand (paw) in marriage as a prize; literally, she cuts it off! The famous jewel in “Search for the Heart of the Ocean” is named after the necklace in Titanic. The pirate union is called IRATE – the International Rodent Aquatic Trade Entente; I’m especially proud of that one.

The silliness struck a chord. The story won second prize, then went on to be published in Beneath Ceaseless Skies.

Cinrak wouldn’t let me go. I had too much fun with her and her charming crew. It was like writing Captain Jack Sparrow, but without the drunkenness and sexism. And way WAY more queer.  Nearly everyone is some kind of queer or gender variant in Cinrak’s world. So much so it’s unremarkable and they just get on with their adventures, like a lesbian squid searching for her cetaceous soulmate, or a chinchilla trans boy finding their beard (I went easy on that pun, it’s too cute a story).

I’m happy to admit I underestimated the audience for these stories, the need for their sweet and silly joy. In being completely free of expectations, I wrote the humour for myself, pulling on my favourite memes, sayings, and images. You could say part of Cinrak is Tumblr sourced. Part of Cinrak’s character creation came from the stories and pictures of capybara chilling out with other animals. The Nopetapus, escape artist octopus stories, and golden retriever videos influenced Agnes the kraken. Columbia the mer is a nod to modern drag queens and Rocky Horror. And I couldn’t have anthropomorphic winds without a few fart jokes.

Some of the humour comes from breaking writing rules (which I love to do). I went especially hard with the alliteration, spending an inordinate amount of time giggling over a thesaurus looking for outlandish words to match each other aesthetically. I deliberately messed up the pirate dialect, keeping barely any consistency, to show it was a living language the pirates used as affectation and social bonding, all with a twinkle in their eye. And Cinrak has many elaborate exclamations; my favourite is “Peeing Sea Cucumbers!” because I have been squirted on by a sea cucumber, and it’s not something I’ve forgotten even thirty years later.

When I discovered the Latin name for capybara was hydrochoerus hydrochaeris I spent a good five minutes shrieking with delight. There was no way I could pass up the opportunity for Excellent Pun Usage. And so the last story in the collection emerged directly from the title “Flight of the Hydro Chorus”. Cinrak, Benj, Loquolchi, and Agnes – hydrochoerus, her pirate apprentice, an opera diva, and a squid – all go on a magical flight serenading the stars; the true hydro chorus, bringing the story arc begun in “Wild Ride” almost into a circle. The sheer perfection gives me such glee everyone thinks I’m bananas. And I’m perfectly fine with that.

Writing ridiculous puns and happy queer pirates, I realize in hindsight, was one way of dealing with the tumultuous last few years. It’s taught me a lot about finding joy amongst the chaos. I hope readers find something in the Cinrak stories that sparks their joy during this time of upheaval.

The Voyages of Cinrack the Dapper Universal Book Link

AJ Fitzwater lives between the cracks of Christchurch, New Zealand. A Sir Julius Vogel Award winner and graduate of Clarion 2014, their work has appeared in Clarkesworld, Beneath Ceaseless Skies, Shimmer, Giganotosaurus, and various anthologies of repute. A unicorn disguised in a snappy blazer, they tweet @AJFitzwater