Nick Martell is joining us today with The Kingdom of Liars. Here’s the publisher’s description:

In this brilliant debut fantasy, a story of secrets, rebellion, and murder are shattering the Hollows, where magic costs memory to use, and only the son of the kingdom’s despised traitor holds the truth.

Michael is branded a traitor as a child because of the murder of the king’s nine-year-old son, by his father David Kingman. Ten years later on Michael lives a hardscrabble life, with his sister Gwen, performing crimes with his friends against minor royals in a weak attempt at striking back at the world that rejects him and his family.

In a world where memory is the coin that pays for magic, Michael knows something is there in the hot white emptiness of his mind. So when the opportunity arrives to get folded back into court, via the most politically dangerous member of the kingdom’s royal council, Michael takes it, desperate to find a way back to his past. He discovers a royal family that is spiraling into a self-serving dictatorship as gun-wielding rebels clash against magically trained militia.

What the truth holds is a set of shocking revelations that will completely change the Hollows, if Michael and his friends and family can survive long enough to see it. 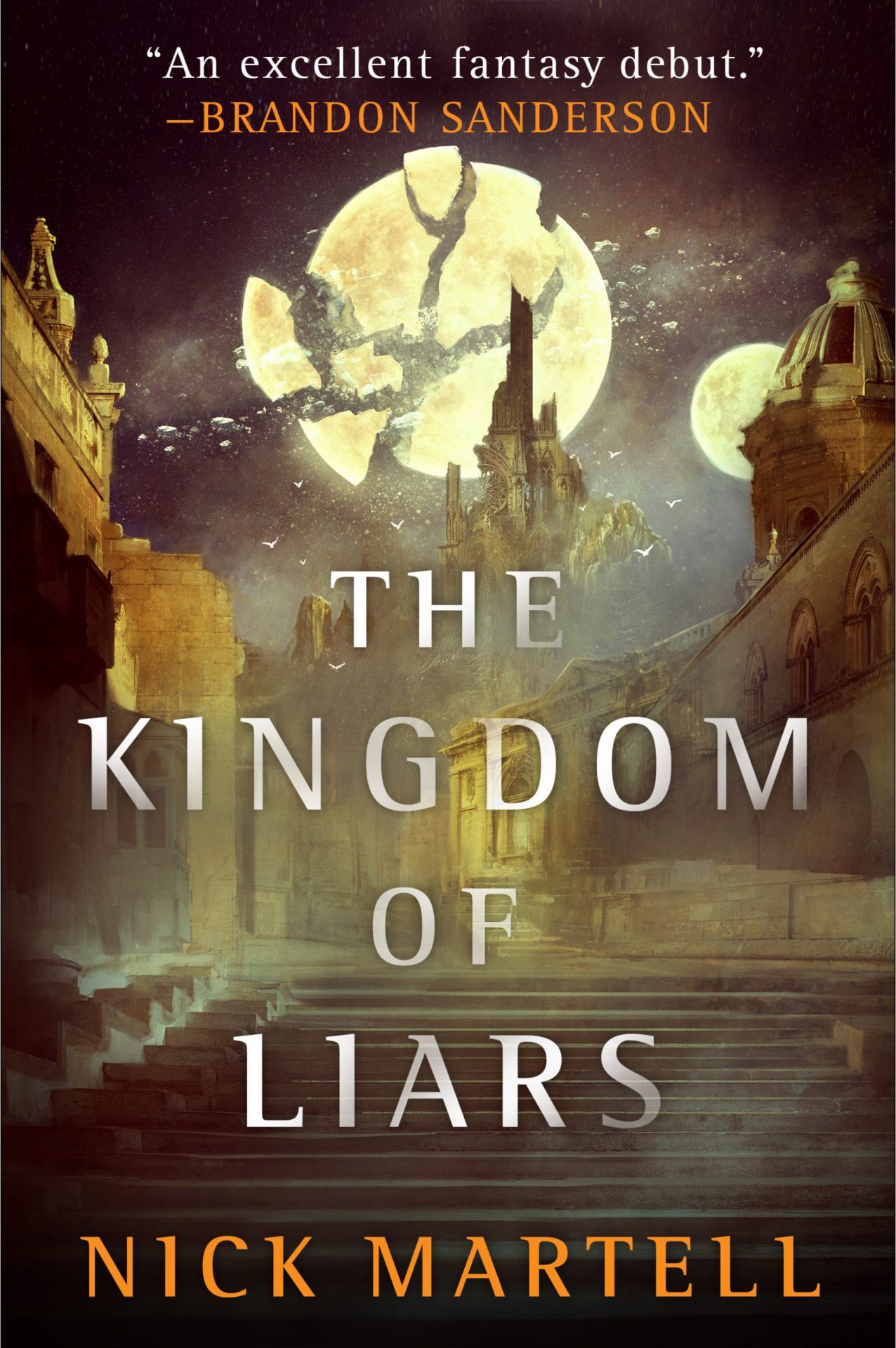 The shattered moon on the cover is gorgeous, isn’t it?

It’s striking and draws the eyes to the seven shattered pieces that reside in the sky above the city of Hollow. This isn’t a spoiler, but readers quickly learn that there’s more to the moon than it simply being a gorgeous backdrop. Pieces of it fall to the ground and besiege the world, and those who inhabit the city learn from a young age what the warning signs of moonfall are.

One bell ringing throughout the city signals a piece of the moon is falling.

Two bells ringing signals a piece of the moon will hit somewhere in the country.

Three bells ringing signals a piece of the moon will hit the city.

And four bells ringing warns those in the city to expect an earthquake or a tsunami from the coast.

Every day, those who inhabit Hollow live in fear of, not just the rebels outside the walls, but the sky itself. It’s truly a city besieged from all sides and this instills a lingering fear in the populace, no matter what they try to do to forget.

It’s probably not too surprising, but the shattered moon is my favorite bit of this book. Not simply because it’s cool or an interesting worldbuilding element, but because it represents a fear I had when I was a child.

My family moved to the United States from Canada when I was young after my father got a new job on Long Island. A few weeks later, 9/11 happened and suddenly a place that I had been promised would be fun and safe seemed anything but.

If asked, most people remember what they were doing and where they were when they found out what had happened. For me, I was sitting in my second grade class talking to a new friend as my teacher ran in and out of the class. One of the kids whose dad was a firefighter was taken out of the room without explanation. Before long, every kid in my class left one by one as their parents came to pick them up. My new friend came home with me since his parents couldn’t pick him up immediately. Neither of us found out what had happened until all our parents were together and they tried to explain. We didn’t understand what they were saying, except that planes had fallen out of the sky and hit two buildings.

I’ve had a fear of flying ever since that day. And for years, I had an irrational fear of objects falling from the sky and hitting what lay below. I used to look at the sky hoping nothing would fall from it today and counted the stars at night to make sure nothing had moved when I couldn’t see them. Nothing ever fell again, but to this day I still look at the sky every so often just to appreciate the peace.

Many years later, I took that fear and put it in The Kingdom of Liars. Partly as a form of therapy and partly to enhance the world I was writing about. So, I guess readers should look forward to taking a peak at what my nightmares were as a child—the uncertainty of what will happen next, the paranoia of watching the skies, and eventually how those who have grown up with a new normal mature into adults. Do they seek to instill change, or let things continue as is?

Nick Martell was born in Ontario, Canada before moving to the United States at age 7. He started writing novels regularly in fifth grade, and his debut novel, The Kingdom of Liars, sold when he was 23 years old.