E. Catherine Tobler is joining us to talk about her book The Grand Tour. Here’s the publisher’s description:

Step right up! Come one, come all, to Jackson’s Unreal Circus and Mobile Marmalade. The steam train may look older than your great-grandmother’s’ china, but within her metal corridors are destinations you have only ever dreamed. They’re real, friends, each and every one—and yours for the taking.

Witness Rabi, Vanquisher and Vanisher Extraordinaire, who can make coins and the past vanish before your very eyes. Dare to visit the Beauty and the Beast, our conjoined twins who are terrible and tortured by turns. Sample Beth’s marmalade, the sticky sweetness containing the very memory of the day you turned sixteen, and your beloved’s lips touched yours once and never again.It’s worth the price, traveler. Jackson’s Unreal Circus is where you can be whoever or whatever you want. Whether it be a ride on the Ferris wheel, slipping inside a skin that is not your own, or the opportunity to live as you never have before—it is all possible on this, the grandest of tours. The train beckons you—come, come!

For the first time, E. Catherine Tobler has compiled a collection of her popular circus stories. With nine stories ranging from the first publishing within this universe to a previously unpublished piece, this is your ticket to her magical world. Welcome to The Grand Tour.

Contains the following destinations:
“Vanishing Act”
“Artificial Nocturne”
“We, As One, Trailing Embers”
“Liminal”
“Blow the Moon Out”
“Ebb Stung by the Flow”
“Lady Marmalade”
“Every Season” (original to this collection)
“Inland Territory; Stray Italian Greyhound” 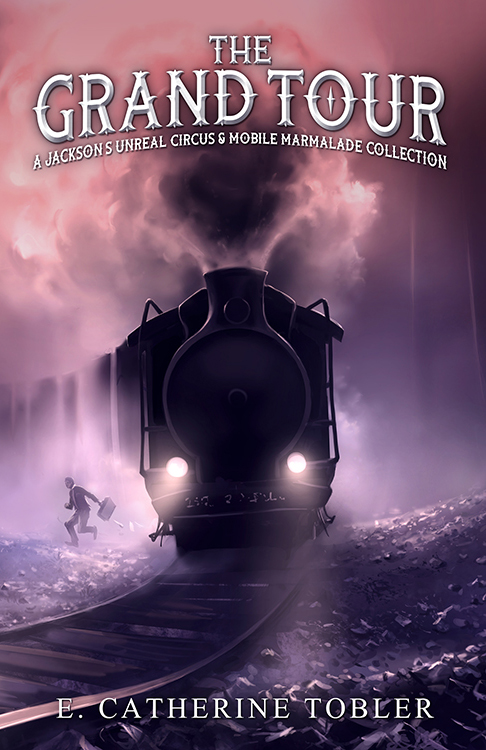 When I was seven or eight, my family—my mom and her boyfriend—regularly headed into the mountains on weekends. It usually involved getting a box of fried chicken, or other easily-transportable food. It involved soda and beer. It involved parkas and sometimes still snowball fights, because the Colorado mountains remained chilly in June.

We would always follow the rivers deep into the mountains. We liked to park riverside and camp on a sun-warm boulder, watching the river and the wildlife below us while we picnicked. I have a distinct memory of my mother eating a chicken leg, and then tossing the bones into the river below. I want to do that, I remember thinking. It seemed grown up, to just fling something away when you were done with it. Carefree. I promptly devoured a chicken leg, save for that awful bit of tendon. I flung the bones into the river and felt very satisfied with myself—until I saw the look on my mother’s face.

We don’t waste food, she told me. She thought the chicken leg still had chicken on it—and maybe it did, because that awful tendon was still attached, and of course there’s meat with that tendon. I was certain I’d eaten all I could have of it, mostly wanting to throw it into the river like my mom had.

The rest of the afternoon was spent sulking. I didn’t take another piece of chicken, though I wanted one. It smelled more delicious than anything I could remember, but I was in trouble—and I didn’t want to mess up again. There were other mountain trips, but even now I can remember throwing that bone into the river, the patchwork shoes I had on, the yellow parka, and the anger on my mom’s face.

Memory has always been a crucial element in my circus stories. What actually happened versus what we remember happening. Given that time travel is also a vital element of the circus stories, there is the temptation to change the past, to change what we remember of the past. There is also the temptation—the ability—to relive those moments. Some people seek the circus for that very thing; others don’t know it’s possible, but discover it is.

Beth, who makes the marmalade for the circus, keeps memories in jars, fragments of years. All kinds of jars fill the caboose of the train, jars filled with specific days about specific people. (Every jar is different and Beth knows where each came from the way she knows the lines on her palm. Her fingers dance over them now, glass shoulders and corked tops; embossed lettering, the thick curve of a sealed lip. Sunlight sneaks through the windows to fragment itself in the bottom of the jars.)

She infuses the marmalades with memories to give them back to people, to allow them to relive a moment from their past—because she can’t ever quite forget her own. (Perhaps one of the countless jars that line the wall of the caboose-turned-bakery contains her real name, but if so, it is pushed well to the back, gathering dust, cobwebs, forgetfulness. She has not forgotten; she cannot.)

My mom is no longer in good health; her memory is fragmented. She remembers the past more readily than she does yesterday. My grandmother, before she died, forgot who I was. All the days at the lake, my memory alone. Will my mother also forget me? Or will she remember me the way she does yesterdays?

What happened two months ago has been erased from her thoughts, while I remember it starkly, as if I had eaten all of the circus’ memory-infused marmalade. Memory has always been such a vital part of these stories, but now it feels more personal than ever. I thought I understood what I was doing before—but only really understand it now. The circus holds memories, even when a person cannot—no matter how far one wanders, there is a place that remembers for better or worse. That’s my favorite bit.

E. Catherine Tobler has never run away with the circus, but there’s still time. Among others, her short fiction has appeared in Clarkesworld, Lightspeed, and Apex Magazine. She edited the World Fantasy and Hugo-finalist Shimmer Magazine, and co-edited the World Fantasy Award finalist anthology, Sword & Sonnet. Follow her on Twitter @ECthetwit or her website, www.ecatherine.com.