Nancy Kress is joining us today with her novel Terran Tomorrow. Here’s the publisher’s description:

The diplomatic mission from Earth to World ended in disaster, as the Earth scientists discovered that the Worlders were not the scientifically advanced culture they believed. Though they brought a limited quantity of the vaccine against the deadly spore cloud, there was no way to make enough to vaccinate more than a few dozen. The Earth scientists, and surviving diplomats, fled back to Earth.

But once home, after the twenty-eight-year gap caused by the space ship transit, they find an Earth changed almost beyond recognition. In the aftermath of the spore cloud plague, the human race has been reduced to only a few million isolated survivors. The knowledge brought back by Marianne Jenner and her staff may not be enough to turn the tide of ongoing biological warfare. 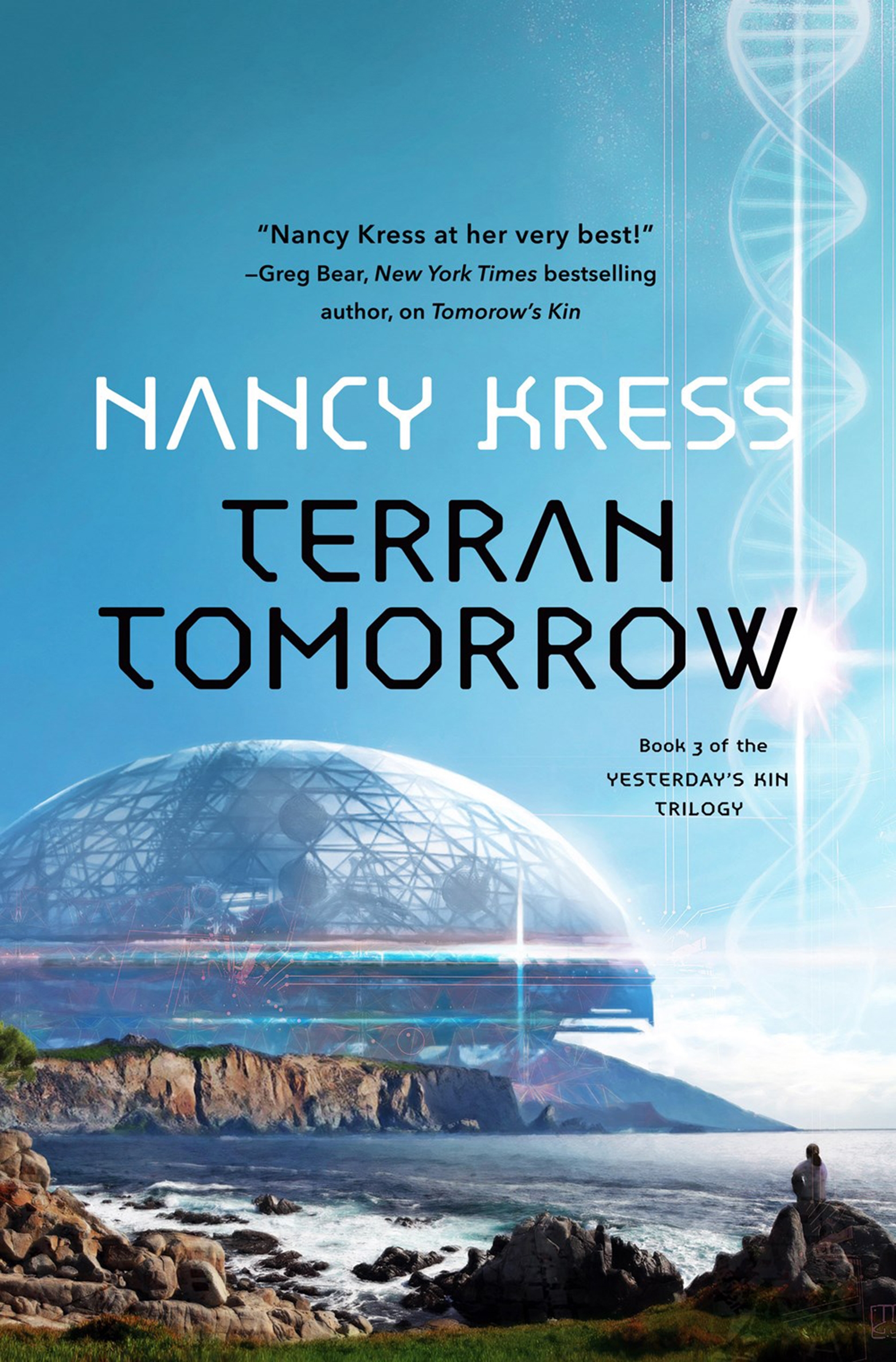 My favorite bit in Terran Tomorrow is something that doesn’t even appear in the novel: zebras.  In this future, post-apocalyptic California, there are no zebras.  Actually, there never were zebras in California.  Paradoxically, that’s what lets me have so much fun playing with the idea of zebras.  I love me a useful metaphor.

In the late 1940’s, Dr. Theodore Woodward, a professor at the University of Maryland School of Medicine, instructed his interns diagnosing patients to consider common diseases before exotic ones: “When you hear hoofbeats, think of horses, not zebras.”  But science fiction writers don’t diagnose patients; they create startling futures (if they’re not startling in some way, nobody reads the book.)

Science fiction is always about zebras.

The first time they turn up in Terran Tomorrow, Dr. Zack McKay is sparring with his colleague, Toni Steffens.  Both are geneticists trying, without much success, to find a way to counteract a bird-born, weaponized virus that, along with the rest of a deadly war, has reduced Earth’s population to a fraction.  The survivors are still at war, both with the microbe-contaminated environment and with a strong terrorist group called New America.  Much of the book takes place in a shielded military base in California.  Seven hundred diverse people live under capable commanders who are doing their best to both preserve life and to aid the scientists who are its only hope.  Zack has zebras on his mind:

As Zack finally reached Decon in Lab Dome, Toni Steffens’s voice sounded in his earplant.  “Did you succeed?”

“Then you owe me another five dollars.  Why didn’t you try?  It’s a serious bet.”

“Zebras,” Zack said.  Let that shut her up for a while.

Zack and his colleague had a long-standing bet: Who could get one of Colonel Jenner’s elite squad of soldiers, whom Toni referred to as the Praetorian Guard, to say something, anything, as they escorted scientists to and from Lab Dome.  So far, Zack owed Toni $345, which was a problem in an “economy” that didn’t use money.  Toni was good at getting the soldiers to break silence, usually by provoking them to outrage.  Zack did not do outrage, but he enjoyed hers.  Usually.

She appeared in the doorway of the esuit room just beyond Decon, a plain woman in her forties, dressed in ancient jeans grown a little tight and a top of flexible brown plastic fabric, the only cloth that the the 3-D printer, running out of polymers, was still able to produce.  “Zebras?”

“Caitlin was drawing them at breakfast.”

“And how does a four-year-old even know about ungulates not found within a thousand miles of what used to be California?”

“From a picture book on her tablet.  Toni, what was that Latin you quoted yesterday for Occam’s razor?”

“I know what it means.  The simplest explanation that fits the facts is usually correct.”

“Not exactly.  A literal translation—”

“Ill-educated barbarian.  So you think we’re looking for a zebra when the hoof beats we’re hearing are from a simple horse?”

“No.  I think we’re looking at horses when we might need a zebra.”

One of the pleasures of introducing a metaphor is that you can play with it throughout the novel.  Terran Tomorrow is the third book in the Yesterday’s Kin trilogy, which began with aliens who arrive on Earth to warn us about a spore cloud drifting through space toward Earth.  The first shock is that these are not aliens at all, but rather humans taken from Earth 140,000 years ago.  Since then, their and our evolutionary paths have diverged slightly (140,000 years is not long enough for much diversion).  The two cultural paths, however, shaped by environment and genes, have been radically different.  In the second book, If Tomorrow Comes, a small group of humans travel to the alien planet, World.  In Terran Tomorrow, a group of Terrans and Worlders return to Earth.  Nobody is expecting them; they have been gone for twenty-eight years and have long been presumed lost.  But here they are, to disbelief and consternation: “Well,” Toni says, “a zebra after all.”

More zebras, unexpected and game-changing events, turn up in the microbial world.  Perhaps they aren’t unexpected for microbes, which promiscuously exchange genes, adapt constantly to new environments, and can produce a new and often mutated generations every twenty minutes.  But these particular mutations and adaptations are unexpected to the geneticists at Monterey Dome.  The first one stuns Zack: “Hoofbeats drummed across his brain.  Zebra.”  The second one even more so:

There.  She had named it, the elephant in the room.  Humanity bifurcating.  If the changes in neural structure or efficiency were permanent and also inheritable, the human race was on its way to becoming two species.

Not an elephant in the room. A swamp’s worth of dinosaurs.  Or—

An entire herd of zebras.

Elephants, dinosaurs, zebras—a bit zoo-ey, but perhaps appropriate for a book that concerns saving the environment and the mammalian life dependent on it.  Characters in Terran Tomorrow have decidedly different ideas about how to do this.  Colin Jenner, green farmer, wants sustainable ecology, no matter the price.  Colonel Jason Jenner, commander of Monterey Base, sees mostly military solutions.  The genetic researchers, Marianne Jenner and Zack McKay and Toni Steffens, put their desperate hope in science.

But only an extreme solution will work, a desperate gamble that can change the entire situation.  In his non-fiction bestseller, statistician Nassim Nicholas Taleb evoked a different animal to embody the idea of an improbable event that upends all theories and changes the entire game: The Black Swan.

But he might just as well have called it a zebra.

Nancy Kress is the author of thirty-four books, including twenty-six novels, four collections of short stories, and three books on writing.  Her work has won six Nebulas, two Hugos, a Sturgeon, and the John W. Campbell Memorial Award.  Her most recent work is TERRAN TOMORROW (Tor), the final book in her YESTERDAY’S KIN trilogy. Kress’s fiction has been translated into Swedish, Danish, French, Italian, German, Spanish, Polish, Croatian, Chinese, Lithuanian, Romanian, Japanese, Korean, Hebrew, Russian, and Klingon, none of which she can read.  In addition to writing, Kress often teaches at various venues around the country and abroad, including a visiting lectureship at the University of Leipzig, a 2017 writing class in Beijing, and the annual intensive workshop TaosToolbox.  Kress lives in Seattle with her husband, writer Jack Skillingstead, and Cosette, the world’s most spoiled toy poodle.