Cesar Torres is joining us today to talk about his novel 9 Lords of Night. Here’s the publisher’s description:

Manhattan is about to be slammed by a Nor’easter in October, and just as the snow begins to fall, a killer begins his hunt. He writes symbols on his victims and removes their hearts. He quickly earns a nickname: The Night Drinker. Nestor Buñuel is the best NYPD detective to investigate the case, which will be his last before retirement. But this is unlike any case he has worked before. Buñuel becomes a pawn in the hands of this ritualistic killer, who is driven to evil by a long-lost movie called 9 Lords of Night, a powerful film rumored to be the work of both a genius and madman. This new thriller from the mind of author Cesar Torres is a descent into a surreal nightmare, in which detective Buñuel moves toward a destiny that he can’t escape.

9 Lords of Night is the exciting sequel to 13 Secret Cities, and the second volume in Cesar Torres’ Coil Series, in which powerful beings from another dimension begin to enter our reality. 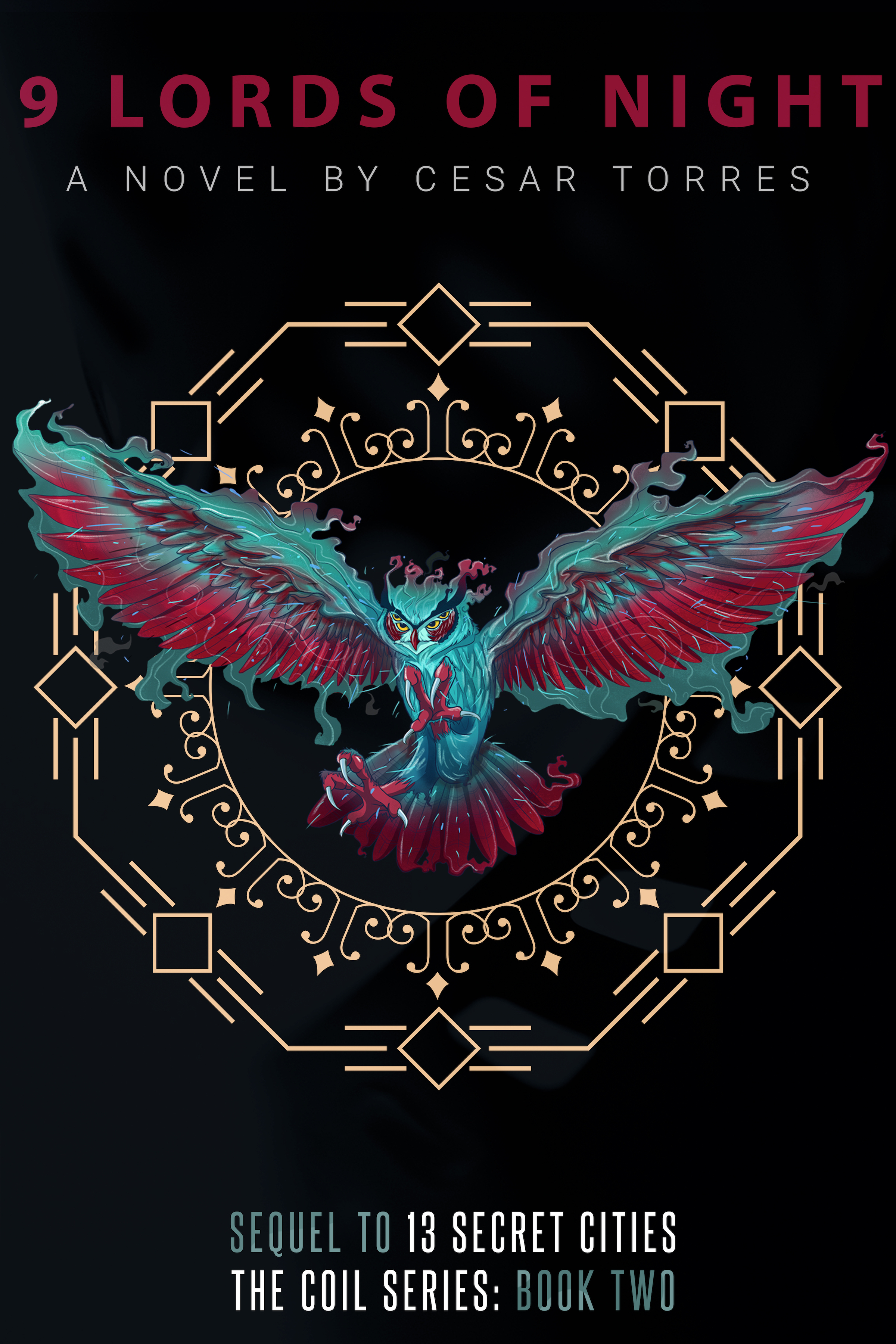 My favorite bit of 9 Lords of Night is the aviary scene:

The sculpture repeated the word “nocturnal” once, twice, and then over and over, elongating Nestor’s sampled voice like taffy, until it became a series of pleasant notes. The sculpture dropped these notes into the rhythm of the sounds around her, and suddenly the melody generated by the room became a deeper, more complex composition. Her body emitted music, as if every part of her skin were a high-end sampler, synthesizer and stereo speaker.

“Do you have a name?” Nestor said.

“My name is Atl, which translates roughly to water. I am named after a symbolic representation of Xiuhtehcutli, the god of fire. Nice to meet you.”

“Nestor. My name is Nestor.”

Atl emitted a series of musical clicks and chirps. Her skin faded from neon green to dark brown, and then she fell silent. Nestor was still holding in his breath; this machine was sublime, like a sunset.

In my novel, Nestor Buñuel, a weathered trans police detective and Felix Calvo, a queer academic, have joined forces to help investigate the serial murder of a woman of color, but their collaboration has none of the glamour we may expect from a typical thriller. Nestor does not get along very well with Felix, and though they have a lot of their own queerness and Hispanic heritage in common, they each feel distant and isolated from each other. And yet, both men are part of a murder investigation that gets weirder and darker with each new twist. Nestor and Felix are almost trapped in this destiny, in the way that characters from ancient Greek plays and myths were forever bound to a particular outcome.

I have so much love for my two main characters Felix and Nestor, no matter how their anxieties, phobias and flaws bubble to the surface. It’s thanks to them that the novel can take the reader on a journey that defies expectations. We think we will be reading a classic police procedural in the first third of the book, but soon, we discover that 9 Lords of Night is meant to go into deeper places of the heart, where our notions about gender, race, police surveillance and even AI converge.

The aviary scene is my favorite bit, because it stands out in contrast against the scenes of police work, forensics and criminal investigation. I love the gritty stuff, but I also love scenes of strangeness and beauty. By this point in the novel, the darkness and brutality of the murders in this book are weighing on the reader, but the scene inside the Aviary points to a new place where the novel will go: It’s a place where imagination can galvanize the detective story together with historical data, cinema and science fiction. It’s an alchemical moment.

Cesar Torres is a novelist, filmmaker and fashion designer. In 2014, his novel 13 Secret Cities put him on the map as a genre-defying fantasist. He is also the author of the How to Kill a Superhero book series, a saga comprised of four novels that has become a cult sensation among queer and gay men. He writes that series under the pen name Pablo Greene, who is known for his queer superhero cosplays. Cesar directed Beyond Built, a documentary about the world-famous bodybuilding gym Quads. He is currently writing the third book in his Coil series, and launching a new fall line for his brand of fitness wear LED Queens. For more info visit cesartorres.me.