Michael R. Johnston is joining us today to talk about his novel The Widening Gyre. Here’s the publisher’s description:

Eight hundred years ago, the Zhen Empire discovered a broken human colony ship drifting in the fringes of their space. The Zhen gave the humans a place to live and folded them into their Empire as a client state. But it hasn’t been easy. Not all Zhen were eager to welcome another species into their Empire, and humans have faced persecution. For hundreds of years, human languages and history were outlawed subjects, as the Zhen tried to mold humans into their image. Earth and the cultures it nourished for millennia are forgotten, little more than legends.

One of the first humans to be allowed to serve in the Zhen military, Tajen Hunt became a war hero at the Battle of Elkari, the only human to be named an official Hero of the Empire. He was given command of a task force, and sent to do the Empire’s bidding in their war with the enigmatic Tabrans. But when he failed in a crucial mission, causing the deaths of millions of people, he resigned in disgrace and faded into life on the fringes as a lone independent pilot.

When Tajen discovers his brother, Daav, has been killed by agents of the Empire, he, his niece, and their newly-hired crew set out to finish his brother’s quest: to find Earth, the legendary homeworld of humanity. What they discover will shatter 800 years of peace in the Empire, and start a war that could be the end of the human race. 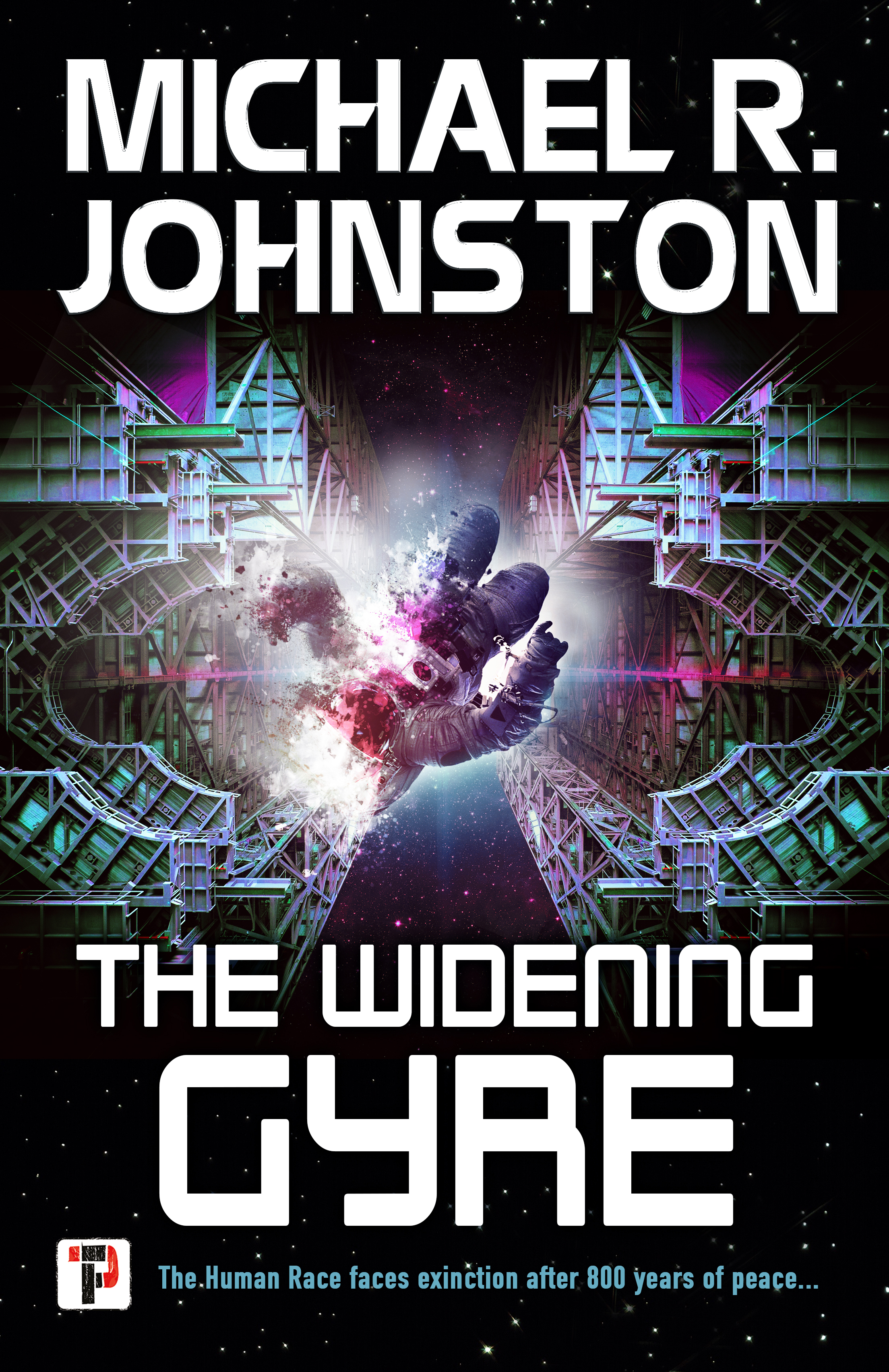 Writing is hard.  Some days, it’s only as bad as pulling twice your weight across the room.  Other days, it’s like trying to juggle fifteen balls while singing Mozart’s “Queen of the Night” aria. But sometimes you get lucky. Sometimes the fates smile on you, the heavens open up, Calliope wipes her soothing hands across your brow, and the words flow like perfectly clear and cold water, and for a little while, you feel like this writing thing is easy.

When I was writing The Widening Gyre, one scene flowed that perfectly.  It is, in the current draft, almost exactly as I wrote it the first time. One of my beta readers called the scene “beat perfect.” My editor had little to say about it beyond some of my weird writer tics that had to be squashed flat.

It’s a heist, and while it goes very quickly, that was intentional.  I didn’t want to bog the characters down in a long subquest; I wanted them to get in, get screwed, find out they were screwed, and then calmly shoot their way out in style while cracking wise at each other and, for a brief moment, having fun.

The secret about Tajen and Liam is that they love their lives. They’d never admit it, but being deep in the shit, outgunned and outflanked, is when they feel most alive.  When things go south, they’re in their element, a smoothly operating team of grade-A smartasses. Meeting each other has only made them embrace that part of themselves. So, when they get captured and subjected to their captor’s ranting, neither of them can take it entirely seriously, even though they’re well aware of the danger:

Liam glanced sidelong at me and sighed. “You know, I’d pay good money for you to shut him up.”

Simms pulled a blaster pistol from his jacket and shoved it into Liam’s face, the muzzle pressing into his cheek. “Do you want to know why you’re not dead yet?”

Liam tsked. “Because the safety’s on?” he asked.

The one complaint I got about this chapter from every reader was that a character introduced in the chapter is never seen again; she remains behind when the characters leave. So here’s a secret, something only my editor knows so far—Seeker will be back in book 2, and she’ll be far, far more important than you’d think.  I’m not done with her yet.   But in the meantime, Tajen and Liam will be snarking their way into and out of danger, one quip—and a well-aimed blaster—away from destruction all the way.

Michael R. Johnston is a high school English teacher and writer living in Sacramento, California with his wife, daughter, and more cats than strictly necessary. He is a member of the 2017 Viable Paradise class.  The Widening Gyre is his debut novel.

1 thought on “My Favorite Bit: Michael R. Johnston talks about THE WIDENING GYRE”