Megan E. O’Keefe is joining us today to talk about her novel Velocity Weapon. Here’s the publisher’s description:

Dazzling space battles, intergalactic politics, and rogue AI collide in Velocity Weapon, the first book in this epic space opera by award-winning author Megan O’Keefe.
Sanda and Biran Greeve were siblings destined for greatness. A high-flying sergeant, Sanda has the skills to take down any enemy combatant. Biran is a savvy politician who aims to use his new political position to prevent conflict from escalating to total destruction.
However, on a routine maneuver, Sanda loses consciousness when her gunship is blown out of the sky. Instead of finding herself in friendly hands, she awakens 230 years later on a deserted enemy warship controlled by an AI who calls himself Bero. The war is lost. The star system is dead. Ada Prime and its rival Icarion have wiped each other from the universe.
Now, separated by time and space, Sanda and Biran must fight to put things right. 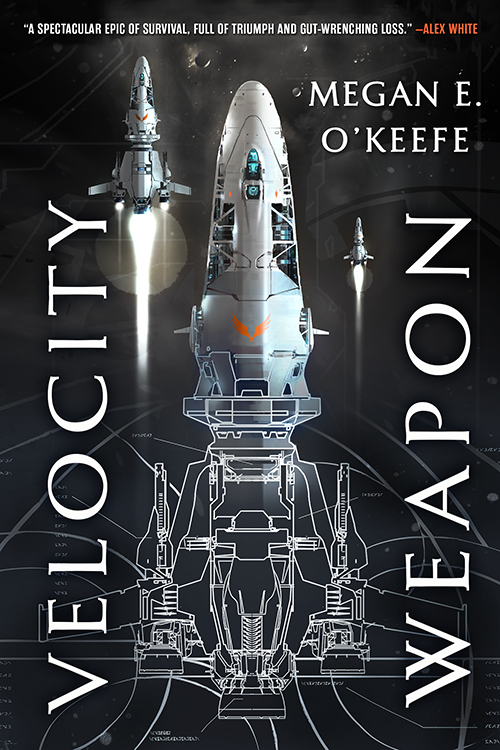 Picking the favorite bit of any story is usually tough but, in the instance of Velocity Weapon, I confess the answer came to me right away: Grippy the robot.

When Sanda finds herself marooned on a state-of-the-art, AI piloted ship thousands of light years from rescue, she also finds the smartship’s maintenance bot, who she quickly renames Grippy due to his sturdy, grasping “hands.” He’s about the size of a large dog, if a dog had tank treads for paws and cameras for eyes. I imagined him as a hybrid of Boston Dynamic’s Big Dog and Number 5 from Short Circuit, with a few more grasping hands thrown in for maintenance purposes.

Grippy quickly makes himself useful by helping Sanda get around. She has recently had part of her leg traumatically amputated, and while the medical facilities on the ship saved her life, there’re no doctors around to help her get accustomed to her new mobility – just Grippy and her own sense of determination to figure things out.

She’s no engineer, though, and when her attempts at fashioning prosthetics don’t always work, Grippy is ready to lend a metallic hand. He even plays a small role at the end. When everything’s gone sideways and Sanda is overwhelmed, he helps her see what she needs to do. Because his job, his programming, is to fix things. To help.

He also helps me, the writer, out a little as he shows us just how quickly Sanda can anthropomorphize, and serves as an interesting thematic parallel to Sanda’s relationship with the smartship, Bero.

Grippy isn’t the AI spaceship that drives the narrative, he’s not even really a central character. He’s got a tiny little brain when compared to the other intelligences in the universe and is pretty limited in what he can understand and do. But while things are steadily advancing toward chaos (hello, narrative entropy) Grippy is always there to help. Also, he’s just plain adorable.

Megan E. O’Keefe was raised amongst journalists, and as soon as she was able joined them by crafting a newsletter which chronicled the daily adventures of the local cat population. She has worked in both arts management and graphic design, and has won Writers of the Future and the Gemmell Morningstar Award. Megan lives in the Bay Area of California.