Ferrett Steinmetz is joining us today to talk about his novel The Sol Majestic. Here’s the publisher’s description:

Kenna, an aspirational teen guru, wanders destitute across the stars as he tries to achieve his parents’ ambition to advise the celestial elite.

Everything changes when Kenna wins a free dinner at The Sol Majestic, the galaxy’s most renowned restaurant, giving him access to the cosmos’s one-percent. His dream is jeopardized, however, when he learns his highly-publicized “free meal” risks putting The Sol Majestic into financial ruin. Kenna and a motley gang of newfound friends—including a teleporting celebrity chef, a trust-fund adrenaline junkie, an inept apprentice, and a brilliant mistress of disguise—must concoct an extravagant scheme to save everything they cherish. In doing so, Kenna may sacrifice his ideals—or learn even greater lessons about wisdom, friendship, and love.

Utterly charming and out of this world, Ferrett Steinmetz’s The Sol Majestic will satisfy the appetites of sci-fi aficionados and newcomers alike. 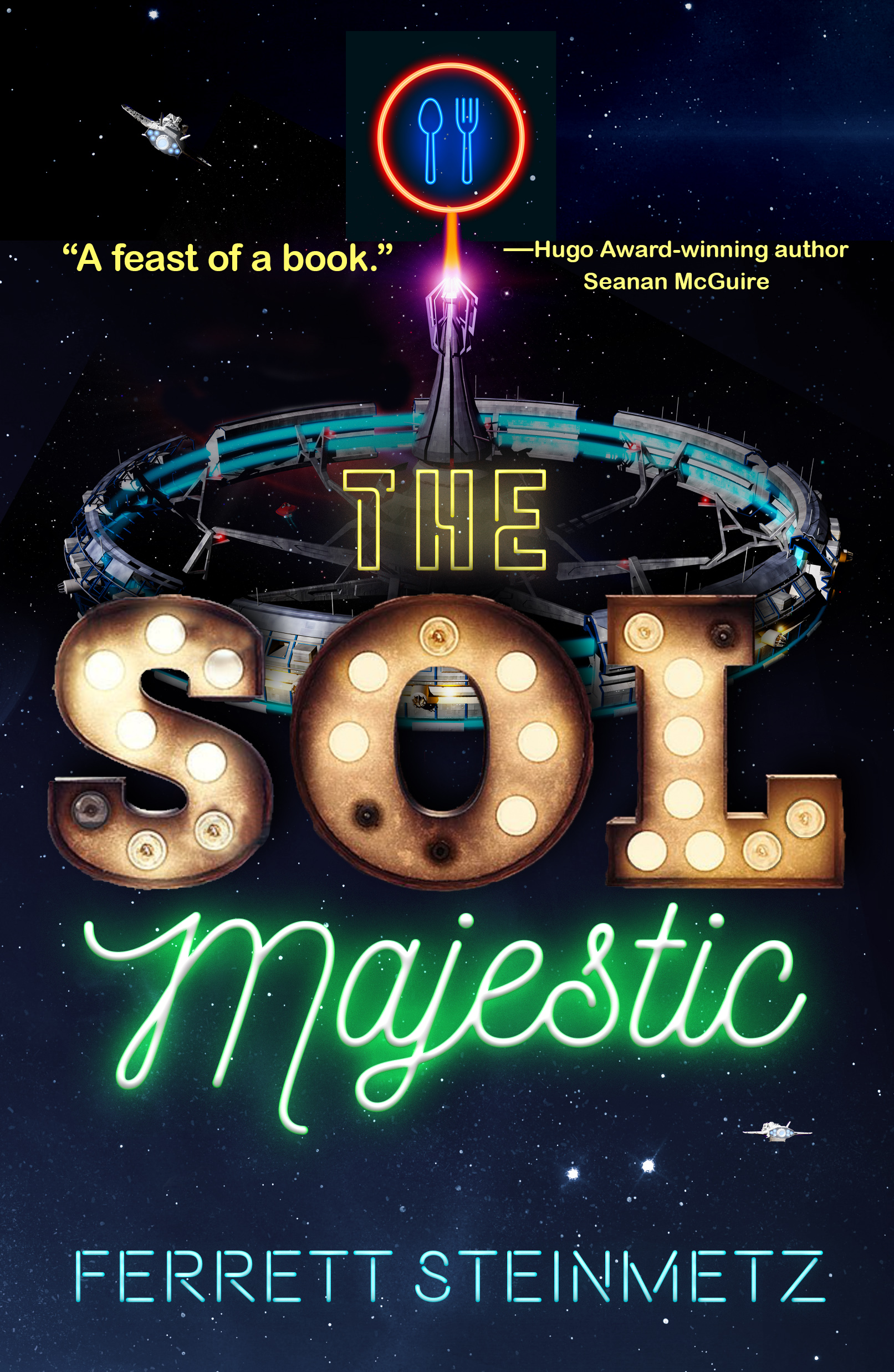 FERRETT STEINMETZ
When I was seventeen, my Uncle Tommy was my only relative who was brave enough to take me into New York City.  Which was strange, given that his doctors advised him not to leave the house.

My Uncle Tommy was a hemophiliac, you see.  If you’re not familiar with the disease, it means your blood takes much longer to clot than baseline people  – so my Uncle Tommy could bleed to death from injuries that other people might have fixed with a few stitches.  His skin was continually bruised, because he never fully healed, and the blood leaked into his joints and eroded his cartilage.  By the time he was in his mid-thirties, he walked unsteadily with a cane.

But my Uncle Tommy was unstoppable.

He had decided that yes, he was mortal, and maybe he only had eight months to live – the doctors had expected that he’d perish within a year since the day he’d been born – but he would live his life as fully as possible.

And if that involved driving into New York so his metalhead nephew could spend the day with his girlfriend from Canada, then by God he’d drive me in.  Because he loved the city, and he loved adventures, and he loved me.

He loved me even though I was trying far too hard for a teenager, and everybody knew it but me.  See, I had latched on to the identity of “metalhead” despite the fact that I didn’t quite understand the concept. So I had big poofy hair and wore a jean jacket emblazoned with an album cover featuring a demon hurling a chain-wrapped priest into a lake, and wore pleather stompy boots because I could not afford leather.  My girlfriend was also a gum-chewin’ metal girl in a cut-off T-shirt and ripped jeans.

We looked like extras in a movie about heavy metal that hadn’t quite bothered to get the details right.

But it was time for dinner, and though New York City was filled with restaurants, we had three picky eaters.  Tommy refused to eat at crappy restaurants when he was in a nice place like New York.  I did not eat vegetables.  And my girlfriend loathed seafood.

So we ambled down the streets of New York for two straight hours, stopping and perusing, one of us vetoing every menu.  Which was not, I should add, an inconsequential expenditure of effort for Tommy – with his bad hip and his eroded knees, walking must have been like treading on knives.  So when Tommy finally exploded with, “All right!  This! Is! It! I don’t care what the next restaurant is, we are eating there! If they serve fried cockroaches, we are chowing down on insects! Got it?”

We got it.  So when we saw the next restaurant, we pushed past the menu posted by the door to walk in without looking.

Which is why we were all taken aback by the maitre’d in a spotless tuxedo, standing behind a podium.

The restaurant was all gold and white – gold chandeliers, snow-white tableclothes, set off by the blurs of busboys in crisp gold-and-red uniforms.  We could peer around the maitre’d to see New York’s finest ordering bottles of champage – fatcat bankers supping $200 bottles of wine, beautiful socialites in gowns perusing menus, old men in tailor-made suits cozily eating richly marbled steaks.

And there I was.

In my jean jacket.

With a demon throwing a priest into a lake of fire.

The heads turned to stare at us – my girlfriend chewing her gum, my Uncle in his worn jeans and button-down plaid workshirt.   I’d already taken a step back towards the door when the maitre’d took a peremptory glance down into his reservation book before fixing Tommy with his cold eyes and asked, “…does sir have a reservation?”

And Tommy – God bless Tommy – cracked his neck, retreating for no man, and said three words that transformed my life:

They had, unbelievably, a table for three.  A table far at the back where nobody could see us, a table right by the kitchen door, but a legitimate table.  And as we settled in, I began to panic: how much money would this place cost?  We weren’t that rich.  And we were out of place, we were poor trash, we didn’t even dress up for this, how could we –

My Uncle Tommy gripped my shoulder:

“Hey,” he said.  “I said we’d do the next restaurant no matter what, and I don’t lie.  And yeah, it woulda been nice if we’d dressed up, but a place like this is about the food; if you appreciate, truly appreciate, what they give you, you’ll be all right.  So settle in.  And enjoy.”

I remember feeling like there was a higher society, and that I was part of it, and that Tommy was the most wonderful man alive.

And in the end, my uncle demanded that we try the sweetness of amaretto coffee. They served it to all three of us, possibly because they assumed if we were bold enough to set foot here then we must have been of drinking age – or possibly because the waiters saw how our faces lit up at every course and decided to bend the rules just this once.

“Every fine meal,” Tommy told me, tipping the cup towards me, “Ends with a good coffee.”

The meal was, I later found out, the cost of a month’s rent. Tommy tossed his credit card on the table with nonchalance.

A nice story, you say.  But how does this story relate to my book?

Well, the answer is that The Sol Majestic is about a beautiful restaurant in space.  It’s light-years from nowhere, a hidden jewel where only those with the love of cuisine make the journey to it.  It has miraculous meals made possible by science-fictional technologies, and a kindness to strangers, and it is a haven to anyone who truly learns to love food.

It is that restaurant, as best I can remember it.  And it might well be where that restaurant’s moved to, for all we know; despite hunting through New York for years afterwards, we never found that restaurant again.   But in my book, I moved it into a space station, preserving all the best bits.

And the owner of the Sol Majestic, Paulius, is my Uncle Tommy.

But he’s in this book – an old man with a cane, a wounded man who creates a paradise for you to come on wild adventures, a man of indeterminate temper but loving nonetheless.  And I recreated an imaginary place to bring you all to, and put the best of my Uncle in there to show you.

The Sol Majestic is about food.  But it’s also about love.  And it’s about my Uncle Tommy, and how understanding that food helps you know when you’re home.

That’s my favorite bit.  That I exhumed a little part of my Uncle Tommy’s glorious magic to share with you.

And I hope my novel nourishes you half as much as he nourished me.

Ferrett Steinmetz is a graduate of both the Clarion Writers’ Workshop and Viable Paradise. He was nominated for the Nebula Award in 2012 for his novelette Sauerkraut Station, and for the Compton Crook Award in 2015. He is the author of The Sol Majestic for Tor Books, as well as the ‘Mancer trilogy and The Uploaded. He has written for Asimov’s Science Fiction, Uncanny Magazine, Beneath Ceaseless Skies, Apex, and Shimmer, among many others. Ferrett lives in Cleveland with his very clever wife, a small black dog of indeterminate origin, and a friendly ghost.