Lawrence M. Schoen is joining us today to talk about his novel The Moons of Barsk. Here’s the publisher’s description:

Pizlo, the lonely young outcast and physically-challenged Fant, is now a teenager. He still believes he hears voices from the planet’s moons, imparting secret knowledge to him alone. And so embarks on a dangerous voyage to learn the truth behind the messages. His quest will catapult him offworld for second time in his short life, and reveal things the galaxy isn’t yet ready to know.

Elsewhere, Barsk’s Senator Jorl, who can speak with the dead, navigates galactic politics as Barsk’s unwelcome representative, and digs even deeper into the past than ever before to discover new truths of his own. 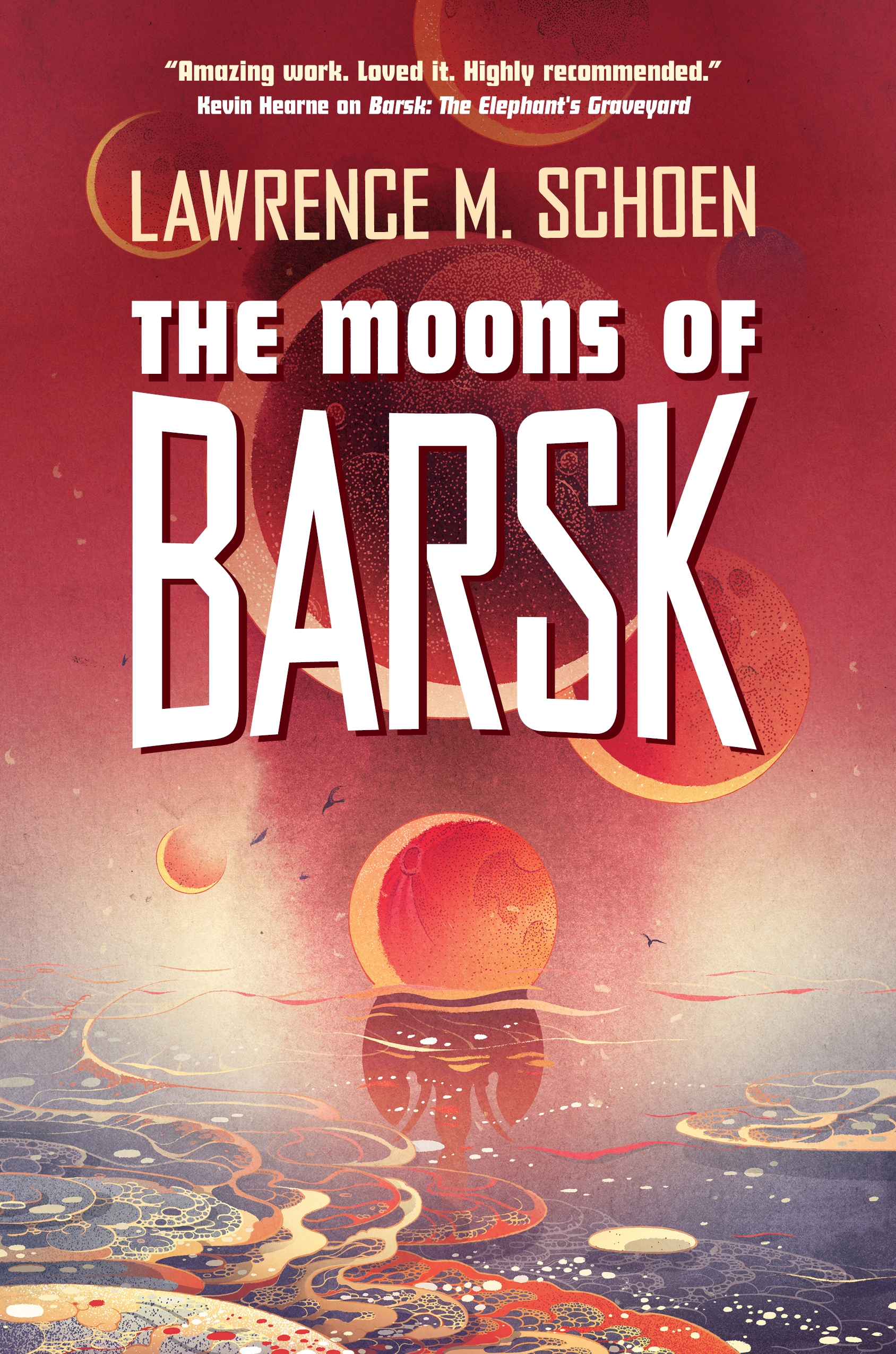 One of the problems with sequels is that you worry that you’ve used up all the cool bits in the first book, all the fancy magic or splendid gadgets or awesome concepts. The first book had anthropomorphic elephants (in space!), a drug for speaking to the dead, a plot to destroy an entire race and their planet, and a long dead politician manipulating society centuries from beyond the grave. It was a lot to take in, and I wanted book two to be even better, so I went looking for ways to build on what I’d already done, but expanding in new directions at the same time.

The Moons of Barsk occurs about six years after the first book. Our protagonist Pizlo, an adolescent who has been marked as an Abomination. He’s considered to be invisible by all “right-thinking people” and he’s only had two adults to talk to him, teach him, raise him. Fortunately, throughout his young life he’s conversed with the world around him, chatting with trees and clouds, even the moons that orbit Barsk. Poised on the brink of adulthood, he’s coming to understand that these voices are actually a manifestation of a more powerful gift: Pizlo is a precog. The voices are a metaphor his mind invented to make sense of his visions.

As part of Pizlo’s education, learns to use the drug for speaking to the dead and with converse the Archetype of Man, an ancient artificial intelligence and repository of all of humanity’s stories. It’s an imperfect system, as a boy who is shunned by his own world is instructed by the ghost of a machine that knows nothing of that world. But it does give rise to my favorite bit: After years of myths and tales and epics, Pizlo has an insight that all the stories are the same story. Frustrated, he confronts his teacher and rewrites his understanding of the universe.

“All your stories! They’re all the same.”

“At a meta-level, they’re all the same!”

“Oh, yes, that is true. As we discussed, there are patterns that repeat throughout all of human history and storytelling, that resonate for all people, but even so differences—”

“Every story, they’re all about what you would call the ‘human condition,’ aren’t they?”

“How could they not? They are human stories.”

“Yeah. Not the long dead race of humans. They’re everyone’s stories. Humans and Fant and Marmo and Brady and . . . and . . . everyone. It’s all one story. It’s the story of us and what it means to be that.”

“Yes, Pizlo. Every story is a way of glimpsing a different facet of who we are.”

“But that’s not just true of your stories, is it?”

“Again, I apologize. I am not following your questions.”

“No, you’re mistaken. Stories, by definition, are constructed. They may be based upon actual events, or inspired in some way, but through the vehicle of metaphor they—”

Pizlo waved him to silence with his trunk. “No, I’m not. Don’t start in again with metaphor. You’re wrong. Everything we do is a story, whether anyone tells it or not. And because all the stories are the same story, so is everything we do. Everyone that’s ever lived, everyone that’s drawing breath right now, and even all who will be born sometime in the future, we’re all living a story. The same story.”

“Ah. I understand you now. Yes. And, it should not surprise you that I have stories about this too.”

“About pointlessness? About futility? About asking what the value of anything is?”

“Many such stories,” said the Archetype of Man. “The concepts of nothingness, of oblivion and uselessness are a popular subset of stories.”

“But if it’s all the same story, then the story about predestination is also the story of free will. Living and death. Joy and love and hatred and fear and indifference. Each of those stories is the same story like every story. Nothing matters because everything is everything.”

Pizlo froze. “Tell me,” he whispered.

“What lies beyond that?”

“Nothing!” Pizlo shouted. “Nothing exists beyond because everything is everything else.”

“Even if everything is story, the fact that you can conceive such a state demands that you have rejected that there can be anything that isn’t. But, to make such an observation, you first must have the concept of something that isn’t. Which means you’re wrong. Which means that story isn’t like all the rest. But it has to be. But it can’t be. Paradox.”

“You’re saying that yes, because everything is everything else, then everything is pointless. Except if that’s so, then saying so requires the existence of something that isn’t, or how could we know? Except then the first thing isn’t possible. Paradox.”

“I don’t think I have anything left to teach you, Pizlo. Many more stories, surely, but nothing that will inform the person you are.”

“That’s the question, isn’t it? Because it doesn’t matter, but it’s also the only thing that ever could. Paradox.”

This sets the stage for Pizlo to write his personal Hero’s Journey: the Abomination from a race that is reviled by the rest of the galaxy, a young man who can see the future but nonetheless believes he can change it.

LAWRENCE M. SCHOEN holds a Ph.D. in cognitive psychology and is a certified hypnotist. He’s also one of the world’s foremost authorities on the Klingon language, and the publisher of a speculative fiction small press, Paper Golem. His debut novel Barsk: The Elephants’ Graveyard won the Coyotl Award for Best Novel, and his latest is the sequel The Moons of Barsk. Schoen has been a finalist for the John W. Campbell Award, the Hugo Award, and the Nebula Award. Lawrence lives near Philadelphia.