Sherylyn and Karen Dunstall, writing together as S. K. Dunstall, are joining us today to talk about their book Stars Uncharted. Here’s the publisher’s description:

In this rip-roaring space opera, a ragtag band of explorers are out to make the biggest score in the galaxy.

Captain Hammond Roystan is a simple cargo runner who has stumbled across the find of a lifetime: the Hassim, a disabled exploration ship–and its valuable record of unexplored worlds.

His junior engineer, Josune Arriola, said her last assignment was in the uncharted rim. But she is decked out in high-level bioware that belies her humble backstory.

A renowned body-modification artist, Nika Rik Terri has run afoul of clients who will not take no for an answer. She has to flee off-world, and she is dragging along a rookie modder, who seems all too experienced in weapons and war . . .

Together this mismatched crew will end up on one ship, hurtling through the lawless reaches of deep space with Roystan at the helm. Trailed by nefarious company men, they will race to find the most famous lost world of all–and riches beyond their wildest dreams . . .

What is their favorite bit? 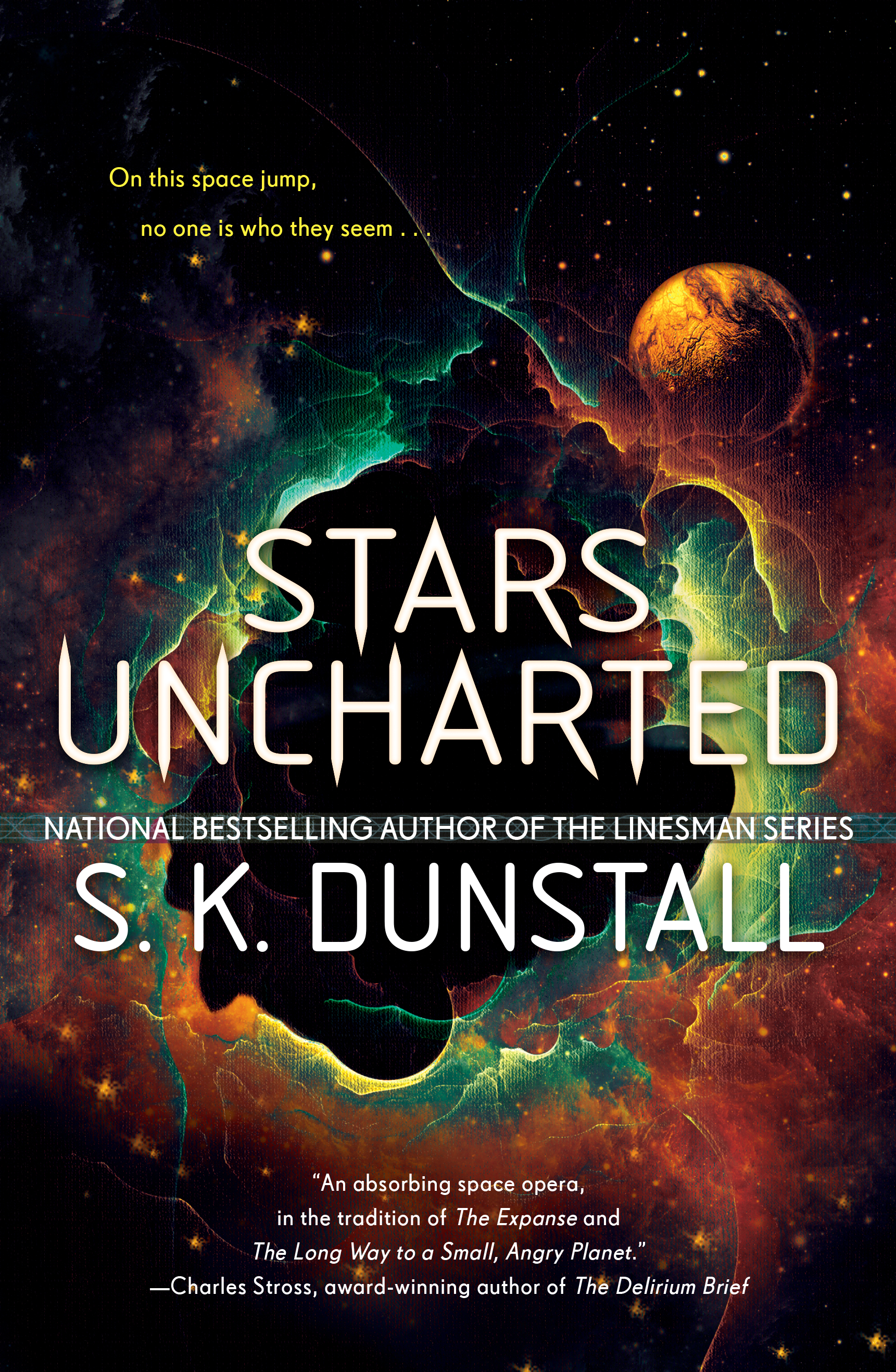 Our method of writing together involves a lot of talking. Sure, we might say one of us writes the first draft and the other then does the heavy bulk of rewriting, but it’s not that simple in real life. One of us does write a first draft, but the other writer follows, accepting or rejecting changes, editing the edits.

Some of those mini stories make it into the book. Most don’t.

We didn’t realise for a long time that we were creating character backstory.

We created a lot of backstory in the characters in Stars Uncharted.  It was fun to talk out how the individual characters would work.  Particularly Nika.

Nika Rik Terri is a body modder. That’s the equivalent of a modern-day plastic surgeon crossed with a doctor crossed with an artist.  She makes people beautiful for living.  She’s a perfectionist.  She’s a craftsman.  She’s acknowledged as one of the finest modders of her day.

So much so that young Bertram Snowshoe (aka Snow), who’s on the run with her, idolises Nika Rik Terri, and mentions her all the time. Which gets embarrassing, given Nika is on the run and is now calling herself Nika James.  But we digress.

Most people would call Nika obsessed. She thinks about body modding every waking minute of her day; she thinks about the people she meets in terms of what she would do to their body to make them look better.

We got a lot of mileage out of that line.  So many verbal skits came out of it and helped us build Nika’s character.

There are only a handful of body modders in Nika’s class.  One of them is Samson Sa, of SaStudio. Nika never says outright, in the story, that she has a professional rivalry with Samson Sa, but in the backstory we created she most certainly does.

So every time she sees SaStudio’s trademark teeth it makes her grind her own teeth a little, as it were.

As we told more backstory, the teeth (and a square jaw) kept popping up in the story, because all our bad guys went to the same body modder.  Samson Sa. It became an in-joke.

Late in the book our ragtag band of explorers are captured.  There’s an incident around a genemod machine, which leads to Nika saying,

“If you wanted cutting-edge mods you should have come to my studio. Instead, you went to SaStudio and got perfect teeth and a square jaw.”

Benedict stiffened. “How do you know where I got my mods done?”

“Samson Sa,” Nika said to Snow. “He’s obsessed with teeth.” He probably had bad teeth as a child. “And he loves a square jaw. What you see there is classic SaStudio. It’s like a signature.”

Snow looked at Benedict. Benedict looked at Nika. Both were a little open mouthed.

“What you’re aiming for, Snow, are mods so unique no one knows who did them. And every season you come up with a different look. Go ahead, have a closer look. I’ll watch the temperature.”

Snow shrugged apologetically and declined to go closer. “She does it to everyone,” he told Benedict.

Nika’s obsession with body modding, and creating perfect bodies is not something that we would normally write as a preference, but it was fun trying to keep her in character. Keeping that obsession and writing through how she would view the world and the people in it, although irritating at times, was one of our favourite bits.

Not only that, it shows perfectly Snow’s and Nika’s relationship.

S. K. Dunstall is the pen name for Sherylyn and Karen Dunstall, sisters who live in Melbourne, Australia. They are the national best-selling authors of the Linesman series, including Linesman, Alliance, and Confluence.

Their new book, Stars Uncharted, came out on 14 August 2018, published by Ace Books.