Lauren C. Teffeau is joining us today to talks about her novel Implanted. Here’s the publisher’s description:

The data stored in her blood can save a city on the brink… or destroy it, in this gripping cyberpunk thriller

When college student Emery Driscoll is blackmailed into being a courier for a clandestine organisation, she’s cut off from the neural implant community which binds the domed city of New Worth together. Her new employers exploit her rare condition which allows her to carry encoded data in her blood, and train her to transport secrets throughout the troubled city. New Worth is on the brink of Emergence – freedom from the dome – but not everyone wants to leave. Then a data drop goes bad, and Emery is caught between factions: those who want her blood, and those who just want her dead. 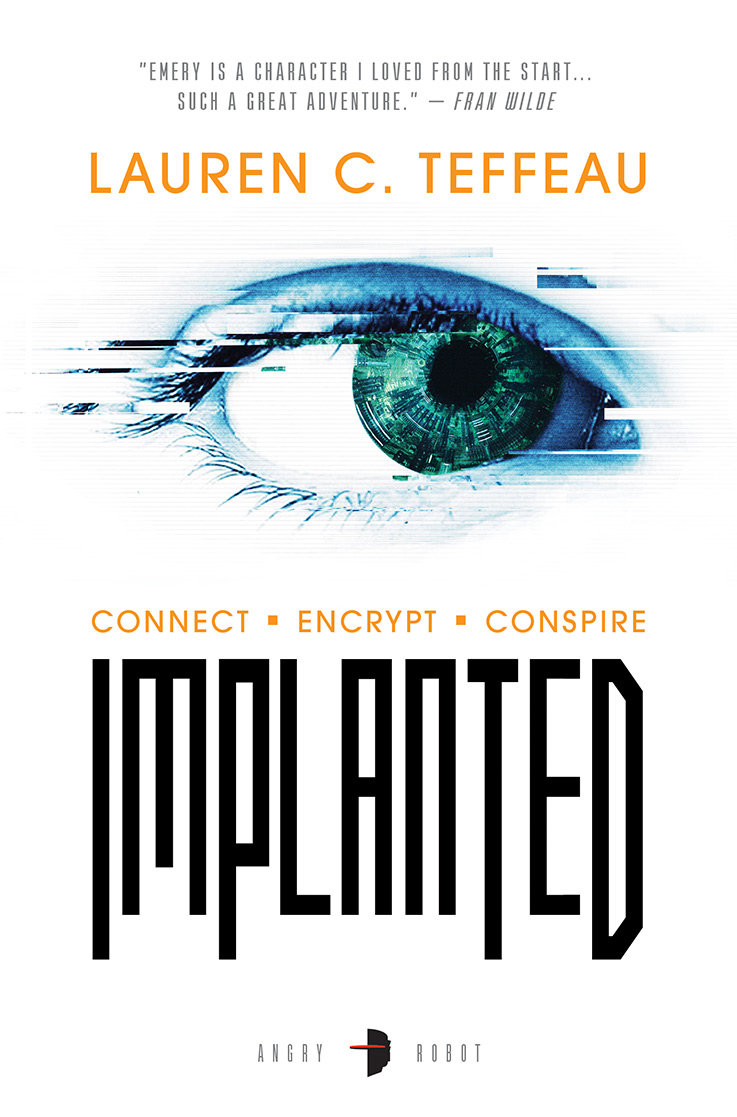 That was my mantra when writing Implanted, my debut from Angry Robot this August and my “first” in so many ways. I’d been writing for years with some painfully close calls under my belt, and I decided to mash up as many things I unabashedly loved as I could, including high-tech gadgets, light espionage, romance, and hard questions about the future.

I’m not saying I was completely out of fucks, but the marketability of such a story was certainly secondary to the fun I had in writing it, where I threw in everything but the kitchen sink. Perhaps even more amazingly, it worked. I still have to occasionally pinch myself that it’s a real book now, and there’s no looking back.

Every project of mine has had at least one aspect that warmed the cockles of my geeky little heart, but Implanted has them by the truckload. It started out with me wanting to write a love story without any physical contact between the main characters but in a way that would not compromise their emotional closeness. I’m a romantic at heart, and I liked the technical constraints such a story posed. I also had to think hard about the kind of storyworld where a relationship like that would be possible.

That led me to cyberpunk, one of my favorite subgenres, but I wanted to give it my own twist. The result is a Blade Runner –meets-solarpunk aesthetic with an added focus on sustainability and hyperconnectivity. The former I believe in passionately, and the later feeds in my academic background. I hold a master’s degree in mass communication and worked as a university researcher examining different populations’ use of internet resources. As a result, I have opinions thanks to those experiences, and they informed a lot of the book’s underlying assumptions when it comes to connectivity.

But the plot engine is all espionage. I loved James Bond growing up and have devoured a lot of spy-tinged stuff over the years, from Person of Interest to Jason Bourne to even Archer. And I like to think this project really benefited from all the action tips and tricks I’ve absorbed through osmosis.

I read Rachel Aaron’s 2,000 to 10,000 recently, and she talks about how important enthusiasm is to the writing process. She basically will reconfigure or cut out wholesale scenes she can’t get excited about. I think that’s partially why the “Let’s kitchen sink this shit” mindset was so useful when I was writing Implanted, blending together all the things I love in a way only I could do. An alchemy you can only find in writing.

And I hope you’ll love it too, with or without the kitchen sink.

Lauren C. Teffeau lives and dreams in the southwestern United States. When she was younger, she poked around in the back of wardrobes, tried to walk through mirrors, and always kept an eye out for secret passages, fairy rings, and messages from aliens. Now, she writes to cope with her ordinary existence. Implanted is her first novel.
Did you know you can support Mary Robinette on Patreon!