When I’m not reading SF or Fantasy, I tend toward mysteries so I’m very happy to introduce you to a new mystery series. What’s it about?

They rely on animal instincts…
Meet “Gin” and “Tonic.” She’s a dog person. He’s a cat person. But when these two friendly rivals team up to solve a mystery, you can bet their pets aren’t the only ones getting collared…

Ginny Mallard and her shar-pei, Georgie, are about to run out of kibble and cash, unless she digs up another client for her private concierge business. So she heads to her neighborhood Seattle bar, Mary’s, to sniff out an opportunity. Or a gimlet or two. The bartender, Teddy Tonica, is usually good for a round of challenging banter, and Georgie is oddly fond of his bar cat, Mistress Penny.

Before she can say “bottoms up,” Ginny lands a job tracking down some important business papers that have gone missing—along with the customer’s uncle. If Ginny hopes to track him down, she’ll need more than her research skills: she’ll need a partner with people skills—like Tonica.

This is one dangerous case that’s about to go to the dogs—unless man, woman, cat, and canine can work together as one very unconventional crime-solving team.

I’ll let L.A. Kornetsky tell you about her Favorite Bit.. 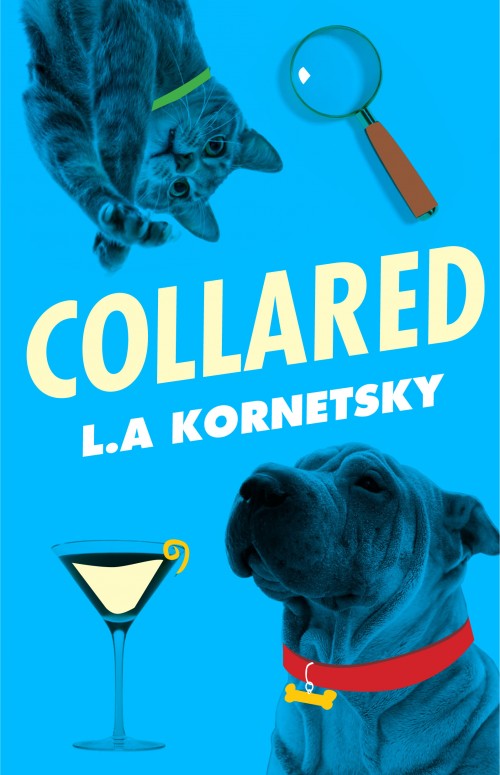 “Hey. You ever think about writing a mystery?”

When my editor at Pocket asked me that, I was slightly floored. I’ve been writing mystery-in-my-fantasy for a long time now, but actually writing a ‘straight’ mystery? That was… well, it was the kind of terrifying that sounded like a lot of fun, actually. The idea came together almost as though I’d been waiting for someone to ask me. Only this wasn’t just a mystery: it was a mystery with animals in it. And thus came Collared: A Gin & Tonic Mystery

W.C. Fields warned, “never work with animals or children” for a reason. He might also have warned against writing them. Because, damn, it’s hard.

Or rather, it’s really easy to do it wrong.

The challenge for me in writing COLLARED was to make the animal characters full participants in the story – without losing any of their realistic aspects. There are mysteries out there where the animal is the detective, or is an actual partner in solving the crime. I didn’t want to go there. I didn’t want an animal that “talked” or was aware of what was happening, on a human level. Humans were humans, and companion animals were animals, and the meeting ground between the two had to be written carefully, to avoid the dreaded twee, or overly-cute, characterizations.

[Friends opined that I am constitutionally incapable of writing twee. I showed them the trunked work that disproves this. Apparently, twee burns your eye sockets out. Apply carefully]

So…how to do it? Humans, I knew. How to create four-legged characters who were both functional members of the plot, and believable as actual animals?

First: I read a lot of pet-training books, reading what the professionals had to say about canine and feline psychology. Then I read a lot of books with animal characters, trying to mark down what I didn’t want to do.

But my main source of research? I freely admit that I spent a lot of time studying both my own companions and animals of other households. Yes, with a notebook in hand, jotting down details, seeing the different ways they use body language and vocalizations, and how we as humans react to those cues, often without ever realizing it. I felt a little like Jane Goodall, if she were doing her research sprawled on the floor of various living rooms and kitchens…

And from that, I started to see who my animal characters would be, and how they matched with their human counterparts.

Ginny Mallard, my main character, was easy – Ginny is exactly the sort to fall helplessly in love, utterly against her will, with a puppy in need of rescue. And there came Georgie: sweet, eager, and far smarter than anyone gives her credit for.

Ginny’s partner, Teddy, was a harder sell; he wasn’t the sort to own a pet. But, I thought, a pet might well decide to own him.… Enter Penny-Drops, mistress of her own fate, and manipulator of others. Not only a cat, but a tabby-cat, and a stray-by-choice.

Writing them, especially in scenes when they discuss the evidence as they see it, was a constant balancing act between voice and instinct, behavior and plot-requirements. But the more I wrote, occasionally going back to stare at my ‘volunteer’ cats and dogs, the more Georgie and Penny took form, eager to help, but in their own way and manner and voice….

A shar-pei’s face fell into wrinkles naturally, but Georgie managed to add a few, scrunching her eyes up with worry even as she settled back onto the sidewalk. “Alone? She’s going alone?”

“Not alone. Teddy’s going with her.”

“Oh.” Georgie didn’t seem quite satisfied by that, and Penny twitched her whiskers. “They’ll be fine, Georgie. They go outside every day, and they’re fine.”

“But… you said the slick-smell man was bad. And something upset her. I don’t like any of this, Penny. And I’m supposed to protect her. We need to stop them.”

Penny reached up with her paw and pulled Georgie’s head down so that she could groom the dog’s ear, her rough tongue barely making an impression on the shar-pei’s plush coat. The action, as expected, calmed the dog down. “No, we don’t. Humans do what humans do. This is good, not bad. And we can help them, like you wanted. You just need to stop worrying. You can do that, right?”

George considered the question seriously. “No.”

L.A Kornetsky is a former editor-turned-writer who, under the name Laura Anne Gilman, writes SF/Fantasy and horror, including the Nebula-nominated Vineart War trilogy.  COLLARED is her first mystery novel. She lives in NYC with two cats and a time-share dog, none of whom could catch a mouse, much less a criminal.