Kendra Merritt is joining us today to talk about her novel Skin Deep. Here’s the publisher’s description:

The only one who can free him is the girl he’s hurt the most.

Cursed for a youthful accident which maimed a young woman, Léon Beauregard roams his mountain as a bear, clinging to the scraps of his humanity. Too bad it’s not working. Every day he loses a little more of himself to the bear and his stupid fuzzy tail. But when Léon comes across Anwen, an enchanter scarred from an accident she doesn’t remember, she promises to free him, because she believes no one deserves this sort of punishment, no matter their crime.

As the graceful enchanter tries to free him, Léon begins to realize Anwen is much more than just a passing enchanter. She’s the one he’s falling in love with. And she is the one whose life he ruined. He knows he must hide his part in Anwen’s past if he wants to keep her, but when bodies show up mauled by a large animal, even she begins to doubt his ability to be redeemed. With his heart, soul, and humanity in the balance, Léon has more to hide and everything to lose if Anwen ever learns the truth about the monster inside him.

NOTE: The Mark of the Least is a series of related stories designed to be read in any order. 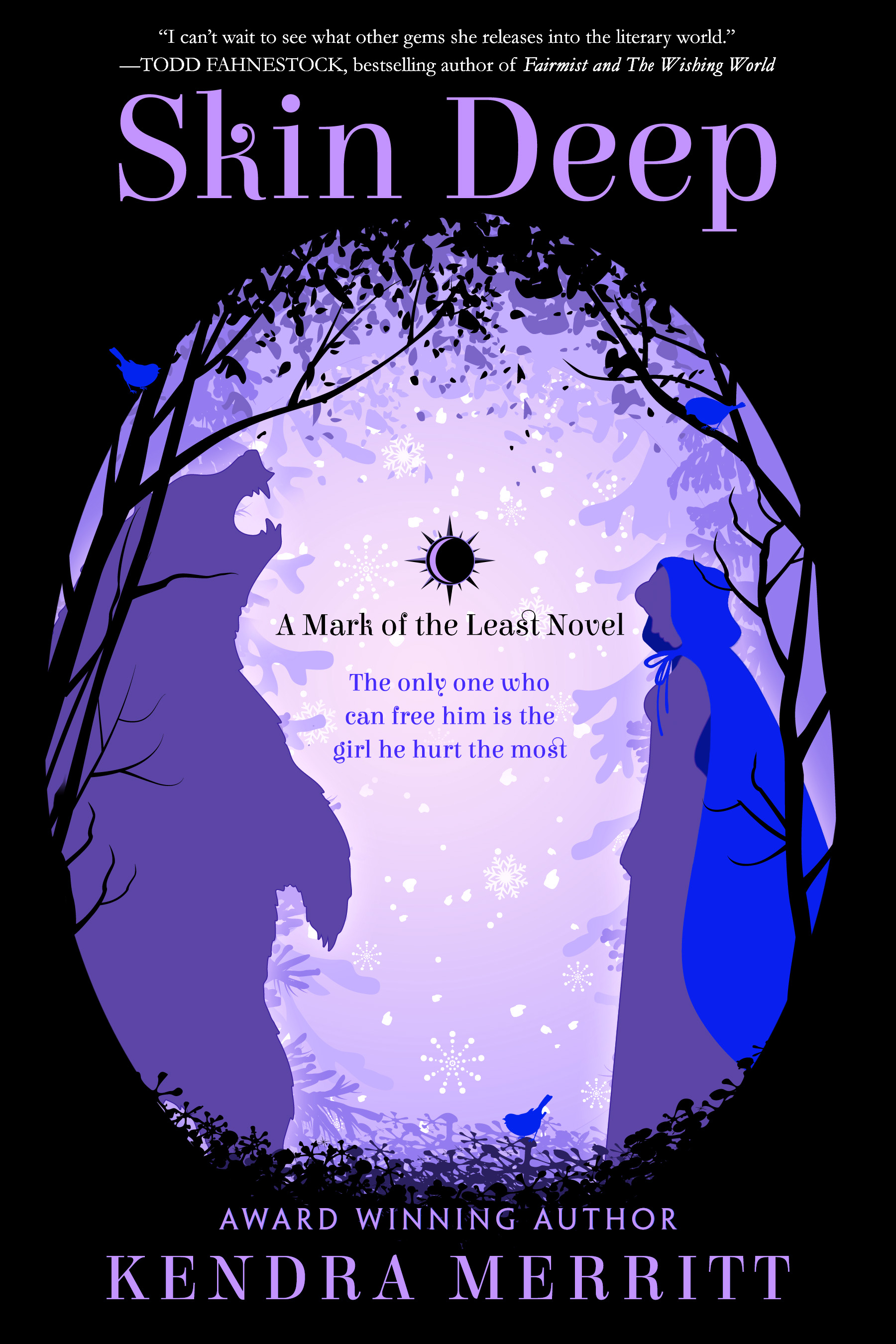 I consider it a good sign when I finish writing a book and it’s still one I’ll enjoy reading again. Especially when it has those moments that make me laugh or get my heart going even though I know what’s going to happen. Luckily, Skin Deep is full of those moments.

So, I had a hard time deciding what my favorite bit actually is. Surely it had to be that really awful poem I—I mean Léon—wrote for Fanny. Or maybe it was the snarky snow leopard with a penchant for poking the bear.

And in Skin Deep, Beauty is scarred.

I really wanted to talk about writing a Beauty who isn’t in fact beautiful. But while I was agonizing over how to do that, I realized the part that I go back to over-and-over again, the part that I still love to read as if I didn’t write the whole dang thing, is the worst part of the book.

We all know it. There’s one in every story. It’s that moment where everything falls apart.

Skin Deep starts with a secret, a lie between two people that changes everything.

Léon is cursed for his involvement in an accident that leaves Anwen disfigured and disabled. But when she shows up on his doorstep offering to free him, he realizes she doesn’t recognize him. And in that moment of realization he makes a choice not to tell her.

Of course, you know this is going to come back to bite him.

Because by the time he wants to tell her, the truth will destroy them. And meanwhile all the awkward flirting and cutesy romantic gestures are all built atop that festering untruth, waiting for the moment it blows up in Léon’s face.

That’s the moment I love. Because you know it’s coming. You know it’s going to be horrible. But there’s no way forward without it.

As I tell my three-year-old, who keeps ruining movie night with the refrain, “I don’t like this part,” you have to get through the bad in order for the good to mean anything. (At least it’s better than saying “conflict is part of life, deal with it.”)

The secret is out. The consequences are inescapable. I love this moment because Léon chooses his redemption and destruction in one go, balancing his original mistake with the glorious ruination of truth. And it was Anwen’s grace and mercy all wrapped up in scars and pain that got him to that decision.

I choose my characters’ disabilities very carefully based on their backstory and personality but also based on the fairytale they’re living out. What could possibly make the story mean something deeper? For Maid Marion I really wanted to see an active heroine not only navigate but dominate the adventure in a wheelchair. Cinderella has a hard time walking and as a result has very interesting shoes.

So, I chose my Beauty to be scarred. She’s disfigured. She walks with a limp. And in no way can she be called a conventional beauty.

She’s exactly the way I imagined her from the beginning. I wanted to tell a story about a girl who is gracious and patient and strong on the inside and is perfect for someone who struggles with only seeing the outside. Léon, who is a little obsessed with physical beauty, takes a while to see Anwen for everything she is instead of everything she’s not. But therein lies his redemption.

And that’s my favorite bit. The moment he loses it all in order to gain what he doesn’t deserve. Cause I’m a glutton for punishment.

All Books by Kendra Merritt

Books have been Kendra Merritt’s escape for as long as she can remember.  She used to hide fantasy novels behind her government textbook in high school, and she wrote most of her first novel during a semester of college algebra.

Older and wiser now (but just as nerdy) Kendra writes retellings of fairytales with main characters who have disabilities. If she isn’t writing, she’s reading, and if she isn’t reading, she’s playing video games. Her first book, By Wingéd Chair, is a retelling of Robin Hood where Maid Marion kicks butt from a wheelchair.

Kendra lives in Denver with her very tall husband, their book loving progeny, and a lazy black monster masquerading as a service dog.