Katherine Addison is joining us to talk about her novel The Angel of the Crows. Here’s the publisher’s description:

Katherine Addison, author of The Goblin Emperor, returns with The Angel of the Crows, a fantasy novel of alternate 1880s London, where killers stalk the night and the ultimate power is naming.

In an alternate 1880s London, angels inhabit every public building, and vampires and werewolves walk the streets with human beings in a well-regulated truce. A fantastic utopia, except for a few things: Angels can Fall, and that Fall is like a nuclear bomb in both the physical and metaphysical worlds. And human beings remain human, with all their kindness and greed and passions and murderous intent.

Jack the Ripper stalks the streets of this London too. But this London has an Angel. The Angel of the Crows. 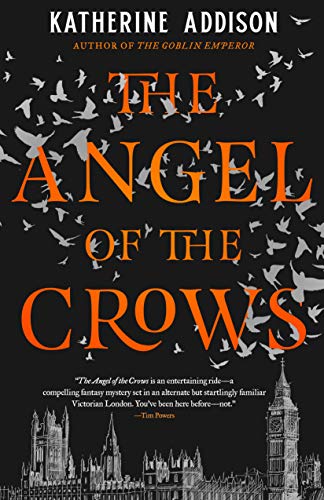 My favorite, favorite bit of The Angel of the Crows requires some explaining.

One of the major plots of the book has to do with Jack the Ripper. I’ve done a lot of research on the subject, and to the best of my ability, those sections of the book are historically accurate. This includes one of the strange sidebars in the Whitechapel murders, which is the graffiti found in Goulston Street under which was a blood-stained piece of victim Catherine Eddowes’ apron. This is the only time that the Whitechapel murderer ever dropped anything as he was leaving the scene of a crime, and this is a guy who successfully carried off two uteruses and a kidney.

The graffiti was destroyed before a photograph of it could be taken (because Sir Charles Warren, the Metropolitan Police Commissioner, was afraid that its anti-Semitism would start a riot), so we only have transcriptions of it. And they (a) do not agree and (b) are very, very odd.

I picked the one I thought was more likely:

Please note I did not say more comprehensible, since one of the problems with the Goulston Street graffiti is that it is incoherent.  Presumably what the writer intends is, “The Jews are never blamed for anything,” which in the virulently anti-Semitic milieu of late 19th century London translates to, “The Jews get away with everything”—meaning, in this case, murder.

I love detective stories and have read a lot of them, and this is the only time I have ever really managed to think like a detective. Because I came up with a new theory about the Goulston Street graffiti, and it is my favorite bit of The Angel of the Crows.

“I have a theory about that [the graffiti], but Lestrade has forbidden me to pursue it.”

“What’s your theory?” I said, obliging his clear desire to be asked.

“Well, I was thinking about the way the graffiti just seemed to appear along with that piece of apron—now you see it, now you don’t—and you said something about it being difficult to accept as a coincidence, and I thought that, really, there’s one other person who could willfully make the graffiti and the apron appear together, and that’s the person who found them.”

“The constable?” I said. “I quite see Lestrade’s point.”

“PC Alfred Long 254A,” Crow said. “He’s been loaned to Whitechapel from Westminster, so he has reason to be bitter about this endless investigation, and he’s far from the only person to believe a Jew is to blame. And how easy would it be for him to find the piece of apron and simply chalk his opinion on the wall before he blew his whistle?”

The historical facts in that passage are accurate. The graffiti was found by PC Alfred Long 254A, and he had indeed been loaned from Westminster to help out the Whitechapel Division. I (and Crow) applied Occam’s Razor to the problem and came up with a solution that I have not seen anywhere else. (I’m sure someone else must have come up with this idea in the past 130 years, but I have never read their work.) I love it for its tidiness and its Most Unlikely Suspect and for the fact that it provides a plausible scenario rather than a Moebius strip of unanswerable questions.

Would the graffiti have set off a riot? Sir Charles was right that the East End was a tinderbox of anti-Semitism, but by the same token it’s hard to believe that anti-Semitic graffiti was unusual. Of course, this particular piece of graffiti would have been emphasized by its adornment of police officers, and maybe that would have been enough of a spark. That’s a judgment call, and although Sir Charles did not always show himself a man of good judgment, I’m willing to believe that his caution was merited. There wasn’t a riot in the East End that morning, and that’s all the answer to that question we’re ever going to have.

This is my favorite bit of The Angel of the Crows because it’s the only place where I, personally, applied the principles of detective work to a genuine historical mystery, albeit a tiny one, and came up with a hypothesis of my own. Of all the many things in this book that were fun to write, this one is the best.

The Angel of the Crows Universal Book Link

Katherine Addison’s short fiction has been selected by The Year’s Best Fantasy and Horror and The Year’s Best Science Fiction. She is the author of the Locus Award-winning novel The Goblin Emperor. As Sarah Monette, she is the author of the Doctrine of Labyrinths series and co-author, with Elizabeth Bear, of the Iskryne series. She lives near Madison, Wisconsin. You can find her on Twitter as @pennyvixen.