Fran Wilde is joining us today to talk about her novella The Fire Opal Mechanism. Here’s the publisher’s description:

Jewels and their lapidaries and have all but passed into myth.

Jorit, broke and branded a thief, just wants to escape the Far Reaches for something better. Ania, a rumpled librarian, is trying to protect her books from the Pressmen, who value knowledge but none of the humanity that generates it.

When they stumble upon a mysterious clock powered by an ancient jewel, they may discover secrets in the past that will change the future forever. 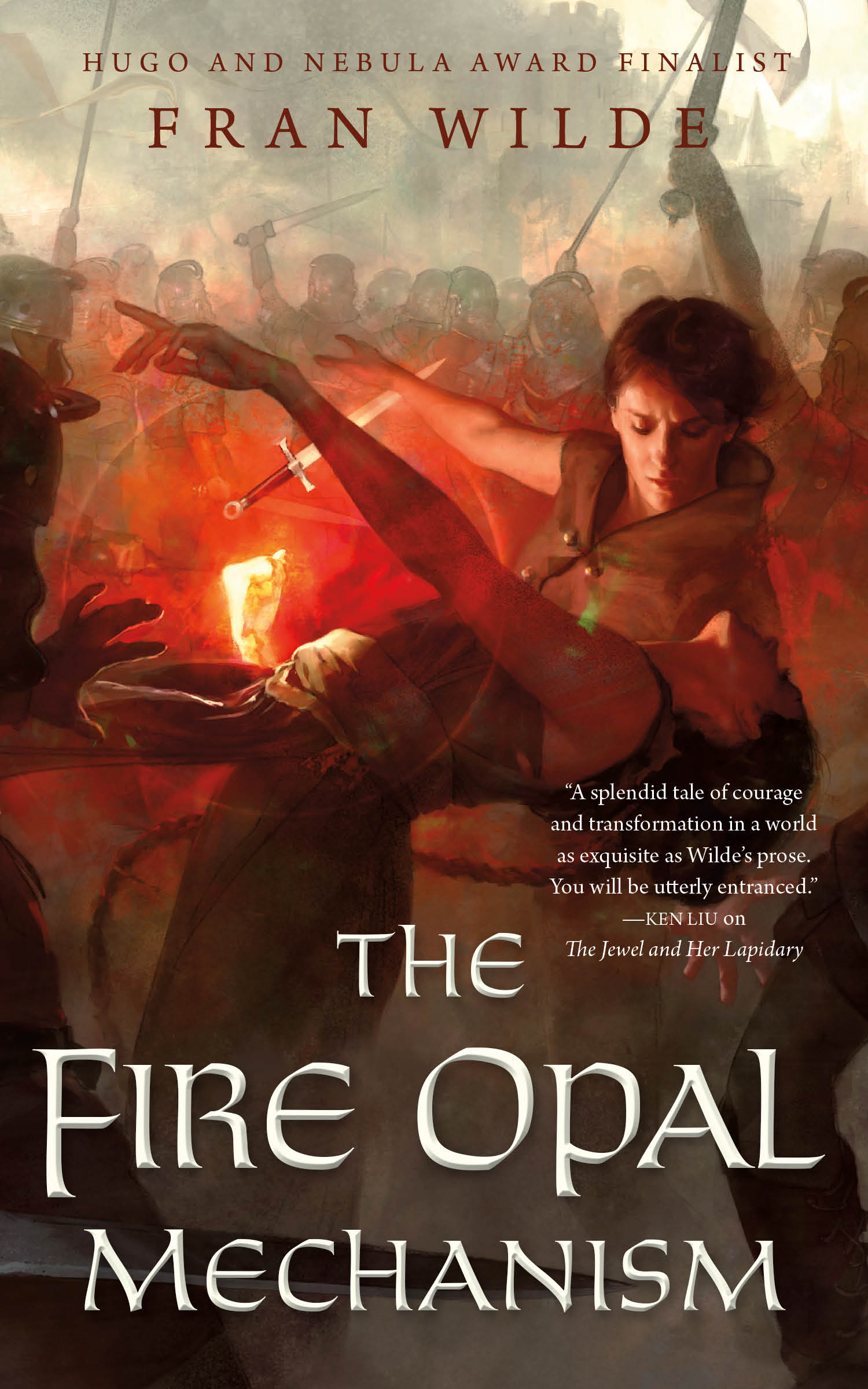 On Permanence and Evolution in Text

“Books are measures of time. They are made to grow old. To grow, occasionally, wrong.”
– Ania Dem, Librarian, The Fire Opal Mechanism

Books have always been my refuge. I disappear into them when reading. I built fortresses of them as a child. And what room full of books isn’t, when you think about it, basically a shelter constructed of words?

So when I set out to write Ania, my librarian, and Xachar, a handler of the very particular printing press in The Fire Opal Mechanism, I gave a lot of thought to the books within the story, those characters who loved them, and those characters who thought that certain kinds of books were a way of hoarding knowledge, and were out of date.

And so, many of my favorite bits of The Fire Opal Mechansim are when Ania, the time-traveling librarian, is thinking about her relationship to books. Her wish to save them all. Her fear that if books are lost, then debate will also be forfeit. And her understanding that books are snapshots in time.

Books feel permanent. The act of committing word to page, especially in print, feels eternal in some ways (especially if one finds a typo — don’t get me started). But they pass in and out of the world in so many ways: they become old, moth eaten, out of date. They are superseded by later knowledge. They are read in the bathtub until they are twice their size and have lost their back cover — ok, that’s probably too much information. 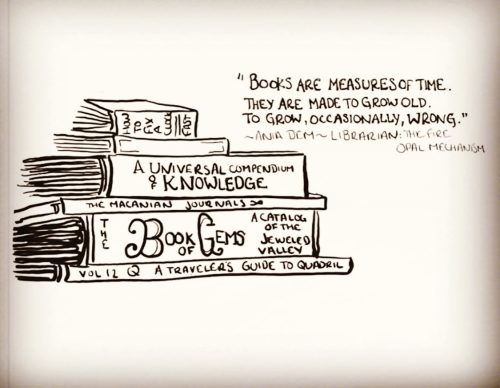 Meantime, digital texts can be overwritten without anyone the wiser. Wikipedia changes constantly; our inboxes seem to have a mind of their own. And while many more pieces of information are at our fingertips, this information feels gossamer-made, fleeting, and sometimes completely insubstantial.

Ania loves books, like I do. She likes their spines, their sturdiness and uniqueness, and all the stories they contain.

She’d loved books since she was a child… loved how each volume felt different in the hand… loved that they had to be handled carefully, like people. But, that they were constant, finished — unlike people.

And one more thing. Ania loves the independence of books. That they span time as individual objects, and objects in conversation. That they can contain and refer to one another. Perhaps most of all, she values that that they do not have a central source. I think Ania imagines, as I do, that in the darkness of a sleeping library, books mutter and argue together like old scholars.

Books aren’t perfect, any more than anything else is. But collected together, they allow us to do a magic thing: we can travel through time to see snapshots of ourselves and how we (or the portion of us that has lasted) once thought, in comparison to all other ways of thinking.

As Ania says to her inquisitors at one point: “All Librarians travel in time, Commissioner. Some more thoroughly than others.”

Fran Wilde’s latest Gem Universe novella, The Fire Opal Mechanism (coming June 4, 2019 from Tor.com Publishing), features time-traveling librarians and thieves. Her novels and short stories have been finalists for four Nebula Awards, a World Fantasy Award, and two Hugo Awards, and include her Nebula- and Compton-Crook-winning debut novel Updraft, its sequels Cloudbound, and Horizon, her 2019 debut Middle Grade novel Riverland, and the Nebula-, Hugo-, and Locus-nominated novelette The Jewel and Her Lapidary. Her short stories appear in Asimov’s, Tor.com, Beneath Ceaseless Skies, Shimmer, Nature, and the 2017 Year’s Best Dark Fantasy and Horror. (Full Bibliography is available at franwilde.net.) She writes for publications including The Washington Post, Tor.com, Clarkesworld, iO9.com, and GeekMom.com. You can find her on Twitter, Facebook, and at franwilde.net. Fran will become Director of Genre Writing at Western Colorado University’s Graduate School of Creative Writing this summer.