Ferrett Steinmetz is joining us today with his novel Flex. Here’s the publisher’s description.

FLEX: Distilled magic in crystal form. The most dangerous drug in the world. Snort it, and you can create incredible coincidences to live the life of your dreams.

FLUX: The backlash from snorting Flex. The universe hates magic and tries to rebalance the odds; maybe you survive the horrendous accidents the Flex inflicts, maybe you don’t.

PAUL TSABO: The obsessed bureaucromancer who’s turned paperwork into a magical Beast that can rewrite rental agreements, conjure rented cars from nowhere, track down anyone who’s ever filled out a form.

But when all of his formulaic magic can’t save his burned daughter, Paul must enter the dangerous world of Flex dealers to heal her. Except he’s never done this before – and the punishment for brewing Flex is army conscription and a total brain-wipe. 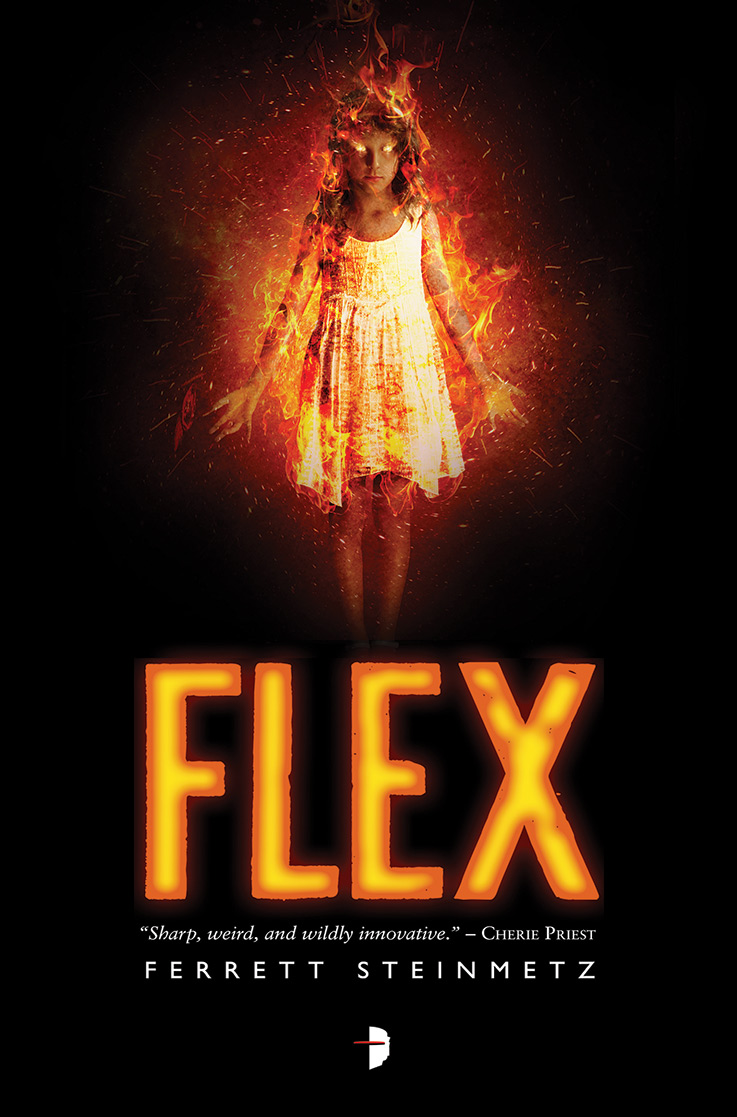 Let’s talk about the word “fat.”  Or “chubby.” Or “plump,” or “chunky,” or any number of other words that describe a woman who’s packing more pounds than what society considers acceptable.

As I discovered writing my book Flex, they’re all insults.

They shouldn’t be insults.  Those words are merely describing a type of person, like “skinny” or “blonde” or “tall.” But Western society has such a cultural revulsion to being overweight that no matter how innocuous a “fat” term is when it’s created, someone will inevitably weaponize it into an insult.

Which saddens me, because as a white middle-aged dude, I see people like myself pretty much everywhere I look in fiction.

What I do not see are people like my wife.

My wife is, as they say in the dating trade, a Big Beautiful Woman – she’s carrying some extra pounds, which she totes along cheerfully when she’s finishing a triathlon.  She’s smartly bawdy, loves to flirt with anyone who comes near her, and is never ashamed of it.

Yet for years, whenever I read a fantasy story, it might as well have been that fat women didn’t exist.

Oh, they existed as wallpaper.  They were the unattractive innkeeper’s wife, or the slovenly Queen of a country that deserved better rulership, or the sassy friend who got murdered by a werewolf to show just how serious things were getting for the real people in this novel.

And when fat women existed, they were largely sexless.  You could have a lusty fat dude – that extra weight was proof of bold appetites! – but in the fantasy books I read, only the thin ones got the romance, while the chubby girls either lost weight or showed up to toss flowers at the thin girl’s wedding.

Thing is, I didn’t want to have a female character defined by their sexuality, because that’s the other terrible way to do things – if a woman wants sex she’s gotta be slinking around like Jennifer Aniston in Horrible Bosses, because women can’t enjoy sex and triathlons and watching Lord of the Rings, no.  Women can have one interest at most and if that interest happens to be sex, well, she’s gotta be a nymphomaniac.

Me?  I wanted to see a fat woman who could be boldly aggressive towards getting what she wanted, and had other interests, and not have those desires be laughable.

All that lack of representation bubbled to the fore when I set out to make a foil for my protagonist.  My central character Paul was an uptight middle-aged dude so in love with paperwork that he literally became a bureaucromancer, able to conjure up rental agreements out of thin air.  He was compassionate, using his powers to subvert a greedy insurance company who was denying people claims… but he didn’t get out much.

Now, I could forge a plot that would get him out of the house and making the sorts of bad decisions that any good novel is made of – but I needed a character who would bring out Paul’s other instincts.

And Valentine DiGriz fell into my lap.

She’s pudgy, but she dresses like the hottest goth girl at the club because she knows she’s beautiful. She loves her magic, channeling the power of videogames to go all Grand Theft Auto on people. She loves sex, refusing to be ashamed of her kinky habits.

She gets all the best one-liners.

Yet for all that, she’s not the Manic Pixie Dream Girl.  Unlike Paul, who is incredibly naïve about how wonderful his power is, Valentine is excruciatingly aware of what happens when you do magic in a universe that actively despises people who break the laws of physics.  Cast enough spells, and the universe rains down horrific coincidences upon you to balance out all the weird stuff you did – and that bad luck is custom-tailored to hit you in all your worst fears.  She’s lost jobs, boyfriends, her family to magic.  She’s a sliver of caring, encrusted in a deep layer of sarcasm, afraid to trust anyone because her magic can kill.

In other words, she likes sex, and she likes videogames, and she has Issues, and she’s fat.  Merely one other descriptor in a long line of them, I hope.

So when an early review of Flex had the reaction of “This book has a female character who gets to be described as pudgy AND pretty with no BUT in between the two?!,” I teared up a little, because that was precisely what I was going for.

And that’s my favorite bit about Flex.

Ferrett Steinmetz’s debut urban fantasy FLEX, described as “A desperate father will do anything to heal his daughter in a novel where Breaking Bad meets Jim Butcher’s The Dresden Files,” is something he is inhumanly capable of shutting up about.   He’s published over 30 short stories since his Clarion graduation in 2008, including the Nebula-nominated Sauerkraut Station.  He also went viral with his essay “Dear Daughter: I Hope You Have Awesome Sex,” which over a million (!) people read.  He Tweeters at @ferretthimself, and blogs entirely too much about puns, politics, and polyamory atwww.theferrett.com.

3 thoughts on “My Favorite Bit: Ferrett Steinmetz talks about FLEX”