Ferrett Steinmetz is joining us today with Automatic Reload. Here’s the publisher’s description:

Meet Mat, a tortured mercenary who has become the perfect shot, and Silvia, an idealistic woman genetically engineered to murder you to death.

Together they run for the shadiest corporation in the world…and realize their messed-up brain chemistry cannot overpower their very real chemistry.

Automatic Reload is the genre’s most unexpectedly heartfelt romantic comedy with explosions, perfect for fans of both Altered Carbon and Atomic Blonde. 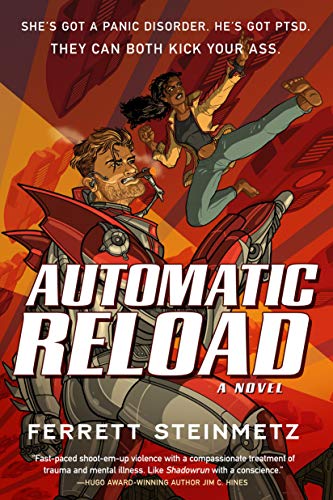 This essay starts out a little intense, but hang on: I promise you it gets better.

There are many ways to come down with post-traumatic stress disorder: surviving bloody combat.  Escaping domestic abuse.  Car accidents.

Some of them, you don’t even have to be there for.

Take Mat, for example: he was a drone pilot for the US Air Force, in a future a little more automated than ours, but not by as much as you’d think. He was tasked with pressing the button – well, more of a “Confirm” prompt – after verifying he had the correct targets on his drone strikes.

You’d think killing someone through a drone strike would be quick.  And it is, for the target.  But drone pilots are also tasked with surveilling the area for hours afterwards, because the friends of people tend to show up to see for themselves after you’ve killed them, so sometimes Mat had to circle the area for hours, just studying the carnage he caused.

That form of PTSD is called “remote exposure,” and it can be every bit as soul-destroying as the kind you get first-hand.  Especially for Mat, who had an incident – one he does not talk about – where he pressed the confirm prompt on the wrong target, and the wrong people died.

The US military called that many things, including a regrettable mistake, and collateral damage, and a diplomatic incident.  Mat called it murder, and he vowed never to hurt another innocent as long as he lived.

See, in the world of my book Automatic Reload, “armed prosthetics” are not only an actual thing, but they’re a reasonably common thing among soldiers.  Not every soldier has one, but they probably know of a person who has one.  Or have heard of one.

Because armed prosthetics are fully auto-targeting, computer-engaged firearm systems, working at multiples of human reaction times.  You program in the guidelines of what you want to fire upon, and your prosthetics will shoot your target dead before the electrical nerve impulse to pull the trigger can travel from their brain down to their fingertip.

It’s not magic technology, of course.  It involves a lot of fine-tuning, because false positives tend to be extremely bad for the false positive.  But Mat believes, honestly believes, that if he programs his onboard systems just right that will enable him to pull off mercenary rescues like no other body-hacker – he alone can program in the perfect parameters that ensure only bad guys will get hurt, and not a single innocent will be harmed.

Now, here’s my Favorite Bit, because let’s be truthful – up until now, this has all been rather grim.  (Sorry about that.)

Mat’s coping mechanisms are not particularly effective.  He lost his first limb in combat, so replacing that with a fancy Zentrine-Gauss upper limb replacement?  No real cost.  But after a couple of dicey missions where he almost got someone hurt because he wasn’t good enough, he wasn’t fast enough, he wasn’t armed enough, well, he voluntarily amputated a leg to pile on some more equipment.  And then he replaced his other leg, despite the fact that he had yet to fail a rescue.  And then, finally, he replaced his remaining arm, because he needed all the firepower he could get to protect himself – no, wait.

He needed it to protect others.

Mat has been slowly going insane, shrugging off his therapists’ best insights. And in some other author’s book this might either be the hypermacho tale of a veteran who Gets The Job Done Despite Trauma, or the downer tale of a suicidal body-hacker who keeps taking worse and worse missions until he finally gets the death he thinks he deserves.

Because on a mission for a really bad illegal consortium that his best friend talked him into, Mat is tasked with escorting a package to be delivered – only to discover that the package is a person.  Specifically, that package is Silvia Maldonado – a woman with panic disorder who has been kidnapped by the consortium and been transformed into a genetically-engineered assassin.

Silvia, it must be said, is not good shape now.  She had panic disorder going in, occasionally lashing out at her mother or sister in unthinking violence when something went wrong.  She’d quietly arranged her life so she didn’t have to meet with people (so stressful) or worse, get yelled at by people (more stressful), becoming a home inspector simply because she could do it when nobody else was around.  She prays a lot to God – she’s probably the most Catholic assassin you’ll ever meet – and lives in such constant stress that she enrolled in an experimental panic disorder treatment, which for various reasons turned out to be “being transformed into an assassin.”

The next phase of her treatment is to be brainwashed.  Which she doesn’t want.  But she also doesn’t want her new body, which reacts even faster than Mat’s weaponry, because she can’t control it – whatever she subconsciously thinks about doing, she does, instantly.

Which is really bad for a woman who, as noted, occasionally lashes out.

And my Favorite Bit is the truth of my book Automatic Reload: sometimes, only love can save you.  Because Mat and Silvia are not a traditional couple, but on some fundamental level they do understand what it’s like to have a brain that can go out on you like a bad knee.  They do understand that their psychological issues mean that there will always be things they cannot do.  They do understand that love has to grow in a very different path when you’re two people coping with serious mental illnesses.

Note that I didn’t say that love will fix you. Mat and Silvia both have honest-to-God psychological problems, and the best they can do in the course of, you know, escaping from a global conspiracy that wants them both dead is to apply mental workarounds.  This isn’t the kind of book where someone hearts really hard and years of trauma get forgotten.

But it’s that nascent love that gives them the strength to confront their mental diseases.  Silvia is the only thing in the world that can keep Mat honest, and Mat is the only person who Silvia knows will never judge her for losing control.

That love is their force multiplier.  Because the global conspiracy knows what Mat is capable of by himself, it knows what Silvia can do alone…

But her kidnappers have no frickin’ way to understand the powerhouse Mat and Silvia become when they’re together.

And that’s my Favorite Bit.

Ferrett Steinmetz is a graduate of both the Clarion Writers’ Workshop and Viable Paradise, and was nominated for the Nebula Award in 2012, for his novelette Sauerkraut Station. He is the author of the novels The Sol Majestic from Tor Books, as well as the ‘Mancer trilogy (Flex / The Flux / Fix) and The Uploaded. His short fiction has been featured in Asimov’s Science Fiction, Beneath Ceaseless Skies, Shimmer, and Andromeda Spaceways Inflight Magazine. Ferrett lives in Cleveland with his wife, a small dog, and a Roomba.