Elizabeth Bonesteel is joining us today with her novel The Cold Between. Here’s the publisher’s description:

Deep in the stars, a young officer and her lover are plunged into a murder mystery and a deadly conspiracy in this first entry in a stellar military science-fiction series in the tradition of Lois McMaster Bujold.

When her crewmate, Danny, is murdered on the colony of Volhynia, Central Corps chief engineer, Commander Elena Shaw, is shocked to learn the main suspect is her lover, Treiko Zajec. She knows Trey is innocent—he was with her when Danny was killed. So who is the real killer and why are the cops framing an innocent man?

Retracing Danny’s last hours, they discover that his death may be tied to a mystery from the past: the explosion of a Central Corps starship at a wormhole near Volhynia. For twenty-five years, the Central Gov has been lying about the tragedy, even willing to go to war with the outlaw PSI to protect their secrets.

With the authorities closing in, Elena and Trey head to the wormhole, certain they’ll find answers on the other side. But the truth that awaits them is far more terrifying than they ever imagined . . . a conspiracy deep within Central Gov that threatens all of human civilization throughout the inhabited reaches of the galaxy—and beyond. 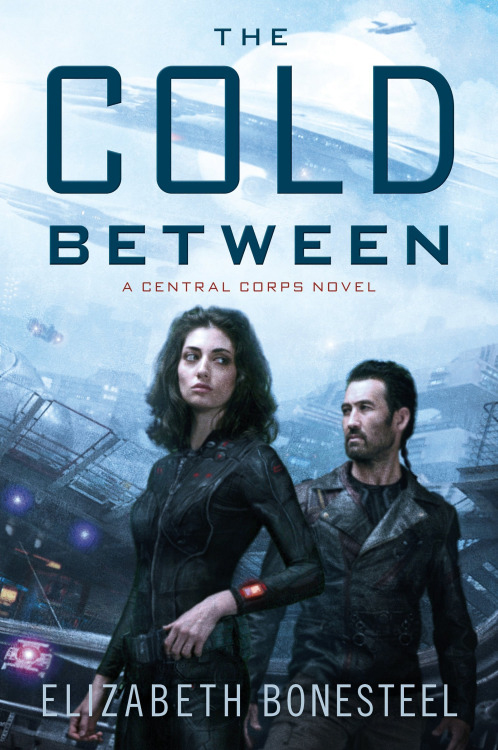 My favorite bit of The Cold Between is the huge, explosive mess that is Greg and Elena.

These are two people who know each other extremely well, yet manage to miss each other completely. They are also, despite Greg’s big mopey eyes, loyal friends. For-real friends. Family. No matter how often that gets tested, no matter how much they claw at each other, the bond remains.

By the time they have their first scene together, all we have of their relationship is Elena’s brief thoughts heading home the morning after shore leave:

Their friendship had been strained for half a year, and the public argument they’d had two weeks ago had undone the last of her equanimity.[…]Losing Danny should have hurt more than losing Greg, but she had so few true friends in her life. Lovers were easy; she felt she had left Danny behind already.

Greg was not so easily replaced.

Greg, for his part, has spent the night being chewed out by his superior officer, and chewing out one of his own people in return. He’s got it in his head that despite their estrangement, he can notify Elena of Danny’s murder professionally and compassionately.

Except that he’s forgotten that he has no real ability to deal with her at all. And when he trots out all of his practiced, military strategies for breaking bad news, she takes the conversation sideways, and he’s immediately off-balance.

This, of course, is what’s always attracted him to her. Greg’s had his life mapped out since he was a kid. He might have resented that in his youth, but as an adult he’s continued the trend. A place for everything, and everything in its place, personal and professional alike.

And Elena blows through his neat categories like she’s made of smoke. To everyone else, he’s the captain, the officer, the boss. To her – that’s his job, not who he is. She’s the only one who sees him as a whole person. He doesn’t even properly see himself.

Of course…Elena’s missed a few things along the way.

I’ve had some readers say “Come on, she must know how he feels!” And the answer to that is…she doesn’t, really. Apart from being her superior officer, he’s been married as long as she’s known him, and she’s seen nothing to suggest he’d wander afield from that. Why would she assume there was more to it than that when he has said and done nothing to suggest it?

Elena is clueless in her own way She’s a mechanic: something breaks, and she fixes it. Her talent is breaking down a problem into soluble component puzzles. The possibility that a particular puzzle might not be soluble does not compute for her. All she needs to do is bash at it from another angle. The trouble with her relationship with Greg is that she’s not in on what all the puzzle pieces are.

Despite all of this, it was important to me to keep Greg from being passive and miserable. He’s made an active choice to say nothing to Elena of his romantic feelings. He’s not going to cheat on his wife, so what’s the point of saying anything? And despite his recent bad behavior, their relationship – just as it is – is everything to him. Predominately, it’s a source of strength for him, not weakness. He feels like she’s the only person in his life who doesn’t really care if he keeps following his carefully-laid-out map. What’s romance in the face of that?

There’s an interdependency between Greg and Elena that neither of them fully understands, and they each seem hellbent on doing everything they possibly can to shatter it. But when it’s backs against the wall, there’s never any doubt: they’re fighting together. It’s when they’re not sure they’re against the same wall that the problems arise.

Elizabeth Bonesteel began making up stories at the age of five, in an attempt to battle insomnia. Thanks to a family connection to the space program, she has been reading science fiction since she was a child. She currently lives in central Massachusetts with her husband, her daughter, and various cats.