Ed Crowell is joining us today to talk about his graphic novel The Jekyll Island Chronicles: A Devil’s Reach, written with Steve Nedvidek, illustrated by Moses Nester. Here’s the publisher’s description:

The thrills continue in this critically acclaimed diesel-punk graphic novel series set in a sci-fi version of the early 20th century!

At the beginning of the twentieth century, one sixth of the world’s wealth vacationed in and around the tiny Georgia island of Jekyll. Captains of industry like Rockefeller, Vanderbilt, Morgan, and Carnegie all called the Jekyll area home. Blending elements of historical fact, clockwork technology, and diesel-punk style, The Jekyll Island Chronicles span an age of furious mechanical advancement while exploring the span of man’s soul – whether good or evil.

In Book Two of this alt-history adventure, Peter, Helen, and the rest of Carnegie’s “Specials” would like nothing more than to return to normalcy along with the rest of the country–especially after defeating their enemies in Book One. But the anarchists have other plans. Luigi Galleani and the Zeno cabal reach out from Europe, across the Atlantic, to wreak havoc, divide the enemy, build an army, and capture plans for the world’s deadliest weapon. If they are to be stopped, the tiny group of heroes from Jekyll will need to find new resolve, new resources, and new allies–and do it all before Nikola Tesla’s most terrible creation is unleashed. 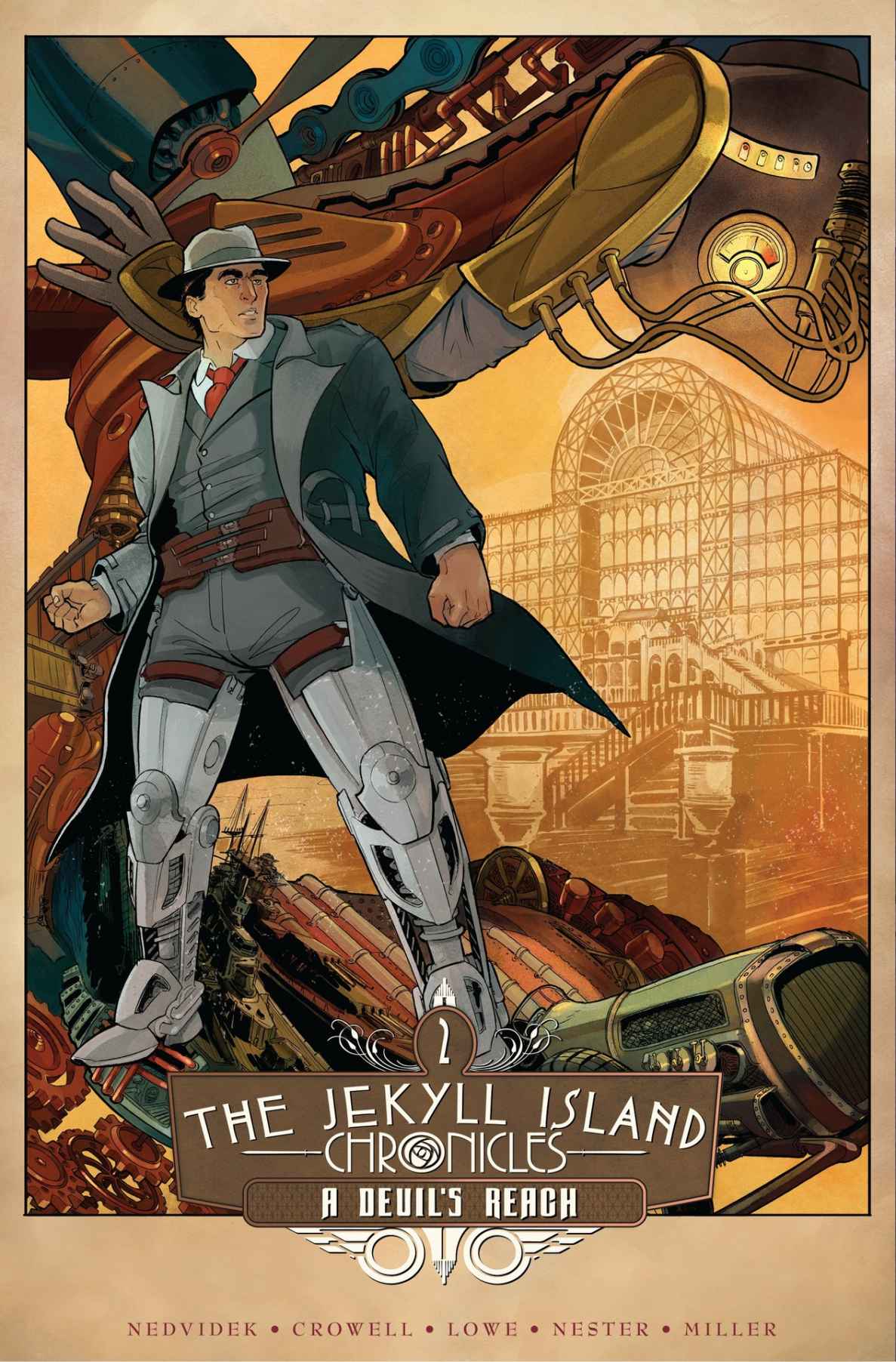 A Devil’s Reach (Book Two in The Jekyll Island Chronicles) is loaded with memorable scenes. There are battles, spy vs. spy moments, historical oddities – as well a few Easter Eggs – but my favorite bit is a dream.

To be fair, I need to explain some of the events in the first book, A Machine Age War, for the dream to make any sense. In that first novel Helen Huxley is introduced with the understated explanation that she is a woman “…from Innsmouth who had an electrical mishap during the war.” (Easter Egg alert). It is soon evident her body can conduct and even create an electrical charge, and this is creating no end of difficulties for her.

Helen falls to the ministrations of Charles Steinmetz and Nikola Tesla who see nothing but potential. With high enthusiasm they set about experimenting and augmenting her unusual quality and turn the lady into a powerful weapon. They deal with any physical effects, but it’s not clear she’s fully comfortable with who and what she’s being asked to become.

Other episodes in the first book hint at the turmoil within Helen. She voices her concerns to President Wilson, but her reticence about her talents is swept aside in the rush to battle evil forces and save innocent lives. She plays a pivotal and destructive part in the grand climax of the book and seems to be at peace with what she has done and what she has become…

Which is why I love the dream sequence in the second book so much.

In the pages that let us share Helen’s nightmare we learn about her history, her thoughts, her guilt and confusion. Helen had been a young, newly-minted nurse during the war. She’d taken the Florence Nightingale pledge to “serve and devote myself to the welfare of those committed to my care.” She’d volunteered to head toward the front lines with a willingness to risk herself to help others.

Near the front she learned the hard lesson that war is not neatly contained, that it doesn’t show consideration for those wearing a cross instead of a helmet or carrying a bandage instead of a gun. She saw things that burned in her memory and she lived through a disaster that burned her body. Perhaps she could have lived with the physical trauma, but there was more to come.

Helen seemed to become a diminished version of who she had been, but she also became something different. She would have gladly accepted the scars if she could have continued to be a nurse but was forced to leave the profession lest she prove a danger to herself and others. She was still wrestling with the complexities and contradictions of that situation when recruited to serve again. Then, the very power that troubled her was amplified by people who were supposedly helping. She learns to use and direct her newfound “talent” but not to fully control it. In fact, while using it to save thousands of lives, she kills dozens of others – and in her own thinking causes the death of a friend.

The dream sequence captures all of that, using beautiful haunting artwork to its fullest, taking the reader into the troubled psyche of Helen Huxley and showing us the demons that tear at her soul. Her dreams are a torment of grey Gothic naves, fire and lighting, faceless enemies and victims, personal failures, ghosts and guilt.

No matter the face she shows to the world, her nightmares describe how shattered Helen Huxley is. She’s fractured into conflicting pieces and the dream is her subconscious trying to reconstruct her, trying to reconcile who she intended to be, who she wanted to be, with what she has done and what she has become. The original pieces are still there: the selfless nurse, the competent assistant, the caring faithful friend, but they now share space with a damaged and scarred victim: a warrior, a killer and a very dangerous weapon.

The scene shows in its powerful dramatic panels the depth of the conflict in this reluctant hero and leaves open the question of whether the pieces can ever form a mosaic worth keeping. It’s my favorite bit and Helen is my favorite character. Her friends need her, so I surely hope she can work it out.

Ed Crowell is a science fiction and mystery author, world traveler, corporate CEO and head of a charity, a cryptocurrency miner and white-water enthusiast.  He holds degrees from Liberty and Georgia State and writes fiction and nonfiction almost constantly.  He lives outside Atlanta with his wife Cynthia and several rescued cats.  He can be found as part of the Lost Mountain Mechanicals at www.jekyllislandchronicles.com