Doug Engstrom is joining us today to talk about his novel Corporate Gunslinger. Here’s the publisher’s description:

Doug Engstrom imagines a future all too terrifying—and all too possible—in this eerie, dystopic speculative fiction debut about corporate greed, debt slavery, and gun violence that is as intense and dark as Stephen King’s The Long Walk.

Like many Americans in the middle of the 21st century, aspiring actress Kira Clark is in debt. She financed her drama education with loans secured by a “lifetime services contract.” If she defaults, her creditors will control every aspect of her life. Behind on her payments and facing foreclosure, Kira reluctantly accepts a large signing bonus to become a corporate gunfighter for TKC Insurance. After a year of training, she will take her place on the dueling fields that have become the final, lethal stop in the American legal system.

Putting her MFA in acting to work, Kira takes on the persona of a cold, intimidating gunslinger known as “Death’s Angel.” But just as she becomes the most feared gunfighter in TKC’s stable, she’s severely wounded during a duel on live video, shattering her aura of invincibility. A series of devastating setbacks follow, forcing Kira to face the truth about her life and what she’s become.

When the opportunity to fight another professional for a huge purse arises, Kira sees it as a chance to buy a new life . . . or die trying.

Structured around a chilling duel, Corporate Gunslinger is a modern satire that forces us to confront the growing inequalities in our society and our penchant for guns and bloodshed, as well as offering a visceral look at where we may be heading—far sooner than we know. 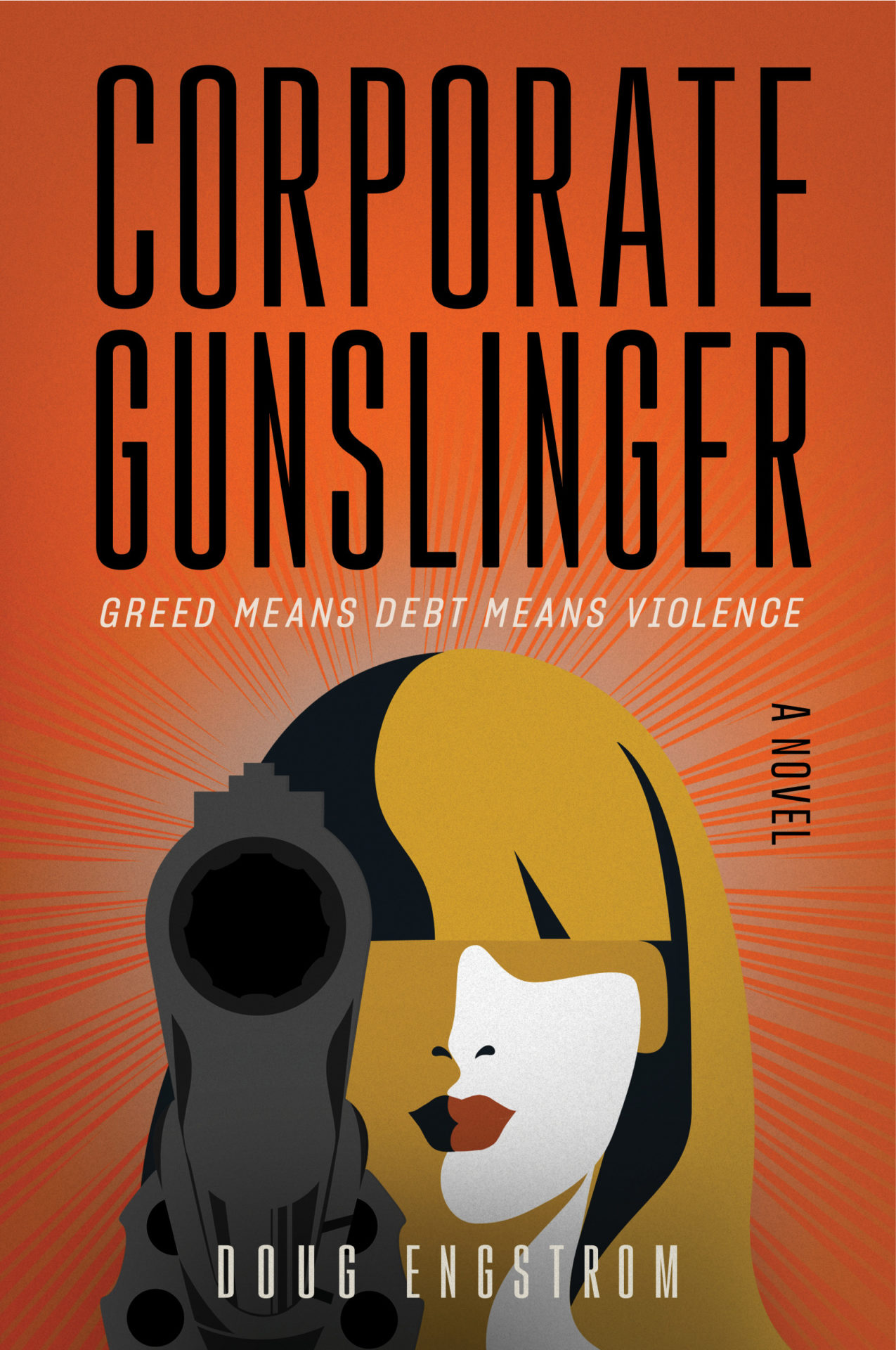 My favorite bit of Corporate Gunslinger arose from my agent’s suggestion and the need to solve an ordinary writing problem. It also contains one of my favorite lines in the book.

Kira Clark, my protagonist, is a professional gunfighter in the near future. Every two weeks, she meets an opponent on a high-tech dueling field, armed with a single-shot pistol, her training, and a uniform with the same bullet-stopping power as a pair of nice pajamas. Acting on behalf of TKC Insurance, she represents her employer against citizens who are so angry or desperate that they’re willing to risk their lives to win their cases. Most of the time, they’re untrained, unprepared, and no match for Kira’s speed and skill.

At one point in the story, Kira signs up for a high-stakes match against another professional. Despite the hazard of facing a well-trained gunfighter rather than a hapless citizen, the winner’s purse is so large she must compete for the right to represent the company. In the first draft I showed Danielle Burby, my agent, the story jumped straight from Kira’s signup to the results of the competition, with a few details thrown in after the fact.

In her initial edit letter, Danielle said this seemed too abrupt for such a big event, and there should be at least one scene relating to the competition. Unfortunately, I had no idea what to use. The obvious choices were a training montage or a detailed account of a crucial gunfight, but I’d already used those elsewhere in the story. That was part of the reason I skipped over the selection process in the first place. But once Danielle showed me other people noticed the hole, I realized I needed to conjure something new.

Kira’s story is a grim one, filled with the physical and emotional toll of constant violence. However, I respect Joss Whedon’s admonition to “Make it dark, make it grim, make it tough, but then, for the love of God, tell a joke.”

Looking through the manuscript, I could see I hadn’t done anything funny in quite a while.

I considered what might happen if, somewhere in the middle of the selection process, Kira and another one of my hyper-competitive gunfighters were left unsupervised at the end of the day. Their conflict starts when they both insist on being the last to leave the firing range, seeking bragging rights for having worked the hardest. It escalates from there.

One of Kira’s signature characteristics is a ferocious insistence on her dignity and worth, so I made her competitor one of those people who refuses to admit other people, especially women, might be competent. I think everyone has encountered the type—the person who knows what they’re doing but can’t acknowledge that anyone else might be good at their job.

He begins by poking at Kira’s fame. She has an MFA in acting, and she’s used her education and stage presence to craft a media image so intimidating half her opponents quit before reaching the dueling field. Her competitor seizes on this as proof she’s “not a real gunfighter” and has only been included among the finalists for show.

Their rapid-fire verbal confrontation takes on a new dimension when a janitor opens one of the training simulators. The simulators closely mimic the dueling field, using computerized “pseudoguns” to administer a painful electrical shock in lieu of a bullet wound.

They both recognize this is a bad idea. They could be disciplined for using the simulator without a trainer present, and at the maximum setting, the shock could affect their performance during the next evaluation session. Several times, they almost back away from the confrontation, but neither one can quite bring themselves to do it, because walking away feels too much like losing.

The emotions and fast pace made the verbal sparring fun to write. At one point, Kira goads her rival on by holding out one of the simulator’s pseudoguns and announcing, “Either take this thing or admit you haven’t got the ovaries to handle it.” It’s one of my favorite lines in the whole book.

Ultimately, they square off, and the outcome shows readers a little more about both characters.

As usual, going back and thinking hard about a part of the book I was trying to gloss over resulted a huge improvement. In this case, a fun little caper in the midst of a dark story became my favorite bit.

Doug Engstrom has been a farmer’s son, a US Air Force officer, a technical writer, a computer support specialist, and a business analyst, as well as being a writer of speculative fiction. He lives near Des Moines, Iowa with his wife, Catherine Engstrom.