Aliette de Bodard is joining us today to talk about her novel Of Dragons, Feasts and Murder. Here’s the publisher’s description:

Lunar New Year should be a time for familial reunions, ancestor worship, and consumption of an unhealthy amount of candied fruit.

But when dragon prince Thuan brings home his brooding and ruthless husband Asmodeus for the New Year, they find not interminable family gatherings, but a corpse outside their quarters. Asmodeus is thrilled by the murder investigation; Thuan, who gets dragged into the political plotting he’d sworn off when he left, is less enthusiastic.

It’ll take all of Asmodeus’s skill with knives, and all of Thuan’s diplomacy, to navigate this one—as well as the troubled waters of their own relationship….

A sparkling standalone book set in a world of dark intrigue. 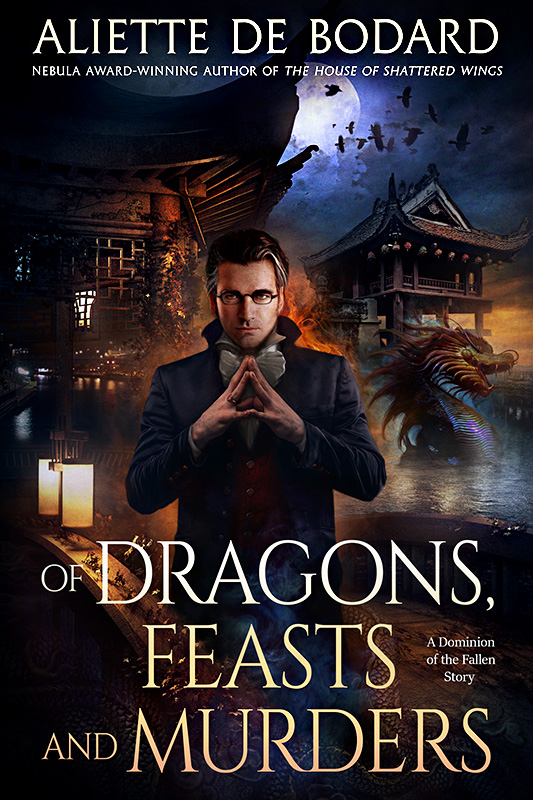 My favourite bit of Of Dragons, Feasts and Murders is the grandmother of the main character.

Of Dragons, Feasts and Murders is a cross between Asian court drama and high Gothic. I wanted to take the mood of my favourite dramas–the different factions, the intrigues, the plots against the throne–and fuse it with the aesthetic of the Gothic–the decayed imperial citadel as its own setting, a stand in for the moral decay of the people therein, a heroine (in my case a hero) who has to break free of its influence.

The two main drivers of the plot are the return to one’s family for Têt or New Year’s Eve (akin to Christmas, as main character Thuan explains it to his husband), and the secret society inside the palace (secret societies concurrent with the decay of the current dynasty are a common motif). The palace, in this case, is a kingdom of water dragons hidden under the river Seine in an alt-19th Century Paris, and the main character is bi dragon prince Thuan, who is now returning to introduce his husband Asmodeus to court.

Thuan has a complicated relationship with the people he grew up with, and one of these people is his grandmother. When I needed her to come on stage, I started with the cliché of the forgetful, kind lady who provides a lot of food, and then I realised I was wasting opportunities. She could still provide the food, but anyone who rose through the ranks of numerous concubines would not have been kind. So I decided to draw on Wu Zetian and the other more bloodthirsty empress dowagers as a role model, and my former backstabbing empress ended up stealing the show.

She looked like a sweet, forgetful old dragon, her antlers translucent, her eyes rheumy and unfocused, the scales on her cheeks and the back of her hands lustreless — and perhaps she was forgetful those days, but she hadn’t risen to marry Thuan’s grandfather through smiles. Thuan had it on good authority — hers, in fact — that she’d murdered about five concubines to get noticed by the then-Emperor, and executed quite a few more to keep the peace in the six chambers.

My favourite scene in the book is when Thuan unexpectedly has to collect his husband from his grandmother’s quarters. Thuan and Asmodeus are a study in contrasts: Thuan is bookish and likes to solve things diplomatically; Asmodeus’s first port of call is violence or threats, and he doesn’t have any scruples about using either. Thuan is naturally worried that Asmodeus, who doesn’t know the court and doesn’t speak very good Viet, is going to get into trouble, but instead Asmodeus ends up bonding with Thuan’s grandmother, and they gang up on Thuan instead.

The Empress Dowager was sitting on the steps in front of the regal chair she was meant to be occupying, propped up on embroidered cushions and nibbling on a dumpling Asmodeus had just handed her. He was kneeling on the other side of a low lacquered table loaded with food, which looked extensively sampled — and he was probably the only person who could pull off kneeling without seeming submissive.

“Ah, husband,” Asmodeus said, laying down his chopsticks near a bowl of sautéed cucumbers. “How good of you to join us.”

“Grandmother,” Thuan said, and bowed. “Husband.” He wasn’t going to bow, and in any case he was reasonably sure he was the eldest in the couple.

Poor Thuan. He is the eldest in the couple–not that this actually nets him much respect from his husband!

Thuan’s grandmother ended up playing a larger part than I thought, and again it’s a fine tradition of court intrigues that the Empress Dowager makes her own agenda (with the respect to elders, mothers of emperors often had more influence than the imperial consorts) and chides everyone from her grandson to her other, younger relatives: Thuan is mostly trying to keep her away from intrigues for fear she’d put a terminal stop to them, which is a source of much bleak comedy in the book. I’m really glad I didn’t go for the first option, because having her being more ruthless definitely was a better, more original and more entertaining choice.

Aliette de Bodard writes speculative fiction: she has won three Nebula Awards, a Locus Award and four British Science Fiction Association Awards. She is the author of the Xuya series of Vietnamese inspired space opera, the most recent volume of which is The Tea Master and the Detective. Her next release, Of Dragons, Feasts and Murders is a fantasy of manners and murders set in a Gothic palace inspired by 19th Century Vietnam, featuring an m/m diplomacy/murder pairing. She lives in Paris.