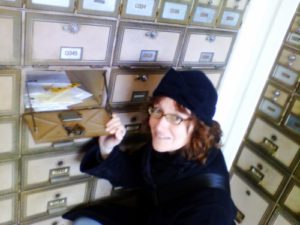 On the first day off from the Month of Letters Challenge, I thought I would report in on how it was going. So far I think it is going really, really well. I should pause here to say that I did not expect this to go viral but, lo, it has. I have no idea how many people are participating at this point beyond suspecting that it is way more than the number of people signed up at the website.

The Month of Letters Challenge has been covered by The Guardian, the New York Times, The Spectator, GalleyCat, and blogs in languages ranging from English to Hebrew. I had no idea — NO idea that it would take off like this. I think it has because I’m not the only one for whom the computer has become a place of work. Other people also want to step back a little and letter writing allows you to do that without pretending that you don’t also love the internet.

I have, at this point, answered seventy-seven letters or postcards and that only takes us through Day Four. Yes. That is a lot of correspondence. But I am loving it. I’m hearing from people that I would never get to talk to otherwise. Housewives from Lousiana, fountain pen enthusiasts from Minnesota, artists from Estonia… It’s amazing.

As much as that, I’m also loving sending out mail to my friends. Before the month started, I used the Month of Letters Calendar to decide who I would write to each day. Even with the volume of mail that has been coming in, I’m still mailing something to one of my friends every day, knowing that they probably won’t write back.

That’s okay. They don’t have to. What’s satisfying is taking the time to think about them and — weirdly — to complete a task. Jackie Gamble pointed this out to me and, by gum, she’s right.

Apart from the magic, which is undeniable, I’m enjoying the sense of accomplishment. It only takes a few minutes to write, seal, stamp, and walk down to my mailbox. As soon as I flip up the flag, I’m done. I’ve accomplished what I set out to do. If only all goals were as easily met! That’s magic, too, I think.

Having a goal of mailing one thing a day is a simple, achievable task. It means that there is at least one thing every day that I can complete and feel good about. You know? So many things that I need to do are open ended.

, but I have to plan the launch party. Yes, I’ve finished carving the Fuzzy’s toes, but I still have to ship him. There’s almost always one more step, even after finishing something. Not so with a letter. Once it is in the mail, you have completed your task. All that remains is the potential that someone might write back.

So, yes. Having a passel of people to write back to is terrifying, but awesome.

Are you participating? If so, how’s it going for you?